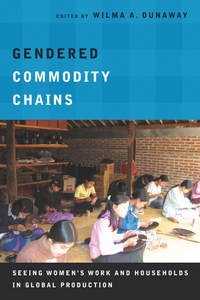 The significant increase in women’s participation in production stimulated by globalisation has long been the focus of feminist researchers. However, much analysis of the role of commodity chains1 in global production has largely (though not always) overlooked the gender dimension. This book addresses this significant gap. It brings together a range of contributions by researchers providing important insights into the gendered dimensions of commodity chains. Some contributions are more focused on analytical exploration of the topic from a World Systems perspective (see below), others provide detailed empirical case studies of women’s engagement across different sectors of production and contexts.

The case studies explore different examples of women’s engagement in commodity chains in both the global South and North. These provide detailed insights into ways in which the advance of production for world markets led by transnational corporations is driving women’s incorporation as semi-proletarianised workers (often migrant, informal, or in household production). Case studies include examination of Philippines fisheries, the effect of the agricultural standard GLOBAL G.A.P.2 on Chilean fruit workers, the feminisation of apparel work in Turkey, and global care chains using the example of nurses migrating from poorer to richer countries. They examine different ways in which this is reshaping of the division of labour between household subsistence, market production, waged work, and social reproduction plays out in different types of commodity chain.

A limitation of the book, from the perspective of gender and development, is its rigid adherence to a World Systems approach, although the level of adherence to this perspective varies between contributers. The book provides little space (beyond a critique) for exploration of gendered analysis that draws on other approaches to global value chains or production networks. World Systems analysis, originating in the work of Terence Hopkins and Immanuel Wallerstein (who provides a Foreword to the book), takes a ‘grand narrative’ view of the underlying forces of monopoly capital accumu- lation that have prevailed since the origins of capitalism in the 16th century. Commodity chains are defined as the network of labour and production processes, resulting in final commodities, that are central to the transfer of surplus between periphery, semi-periphery, and core countries. They underpin a World System, it is argued, that is in terminal crisis necessitating a shift by civilisation to a more democratic and egalitarian world.

However, this sweeping perspective provides few analytical tools for in-depth unpacking of the qualitative shifts that have taken place at different phases within the world economy. It provides only a generalised account of the commercial dynamics of globalisation that have driven outsourcing of manufacture since the 1970s from developed to developing countries, and feminisation of production in the latter. It mainly casts women as victims of historical processes of monopoly capital accumula- tion, rather than providing nuanced analysis of both the negative and positive gender implications. Some chapters in the book examine resistance to super-exploitation, but there is little exploration of how leverage points for advocacy and campaigning could enhance women’s empowerment. Indeed, efforts by non-government organisations to support women workers are seen by some (but not all) authors as perpetuating gendered inequalities, supporting a ‘developmental illusion’ within world capitalism. This is not to deny the detrimental effects of globalisation for women in many households and communities, or to say that all civil society interventions are beneficial. Rather to argue that these complex processes require more nuanced feminist analysis of the changing gender dynamics of global production than countenanced by a World Systems approach.

Having said this, both the analysis and case studies brought together in this book are based on strong scholarly research. Combined, they provide important insights into key aspects of the gendered dimensions of commodity chains, and rightly establish gender as central to the analysis. For those in accord with a World Systems perspective, the book is a must read that will provide a foundation for future investigation. For those with differing perspectives on gender, development, and global value chains, this is a thought- provoking book that will help to stimulate much needed future debate and research.

1  A commodity chain traces the links between the set of processes and actors along a chain that are involved in transforming a resource or set of component parts into a finished commodity, which is finally distributed to consumers.
2  GLOBAL G.A.P. (Good Agricultural Practice) is a private, standard setting organisation that promotes safe and sustainable agricultural production and sets voluntary standards for the certification of agricultural products globally.