Feminists in Development Organizations:
Change from the margins 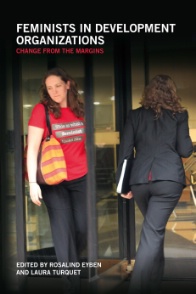 This book provides a highly readable insight into the working lives of women (no men were included) engaged as gender specialists in a variety of organisations involved in development activities. It summarises the findings of a collaborative project conducted from 2007 to 2012 which consisted of critical reflections on their work, and their attitudes to it by a group of women working in the head offices of DfID, UN agencies, Ghana’s Ministry of Women and Children’s Affairs, the European Union, the Asia Development Bank, Oxfam, and  ActionAid. The project employed  an innovative method of self-enquiry, using a series of informal and revealing conversations which were recorded by the editors.

The group developed friendship and a feeling of mutual solidarity through this process. Such a method was particularly effective in enabling the women to honestly exchange experiences regarding the successes and challenges in their work in promoting gender equality, and their feelings regarding these.

As such, it provides a vignette of what they themselves seemed to perceive as the guerrilla warfare tactics they used in combatting the patriarchal power they had encountered within the organisations, in order to pursue their gender equality agenda. In reading this, I was reminded of Naila Kabeer’s work (1) on the need to understand the way that institutions perpetuate unequal relationships especially between men and women, and the need to address this in work on gender and development. The book was also reminiscent of Gareth Morgan’s theories set out in his book, “Images of Organization” (2), which identify the way in which organisations resemble models originally developed in armies, based on strict hierarchies and top-down orders from senior officers down the line.

So I presume it was this kind of an institution that the editors refer to when they talk about “bureaucracies”, the word which they use to describe all the organisational settings of all their contributors. However, this is not made explicit. According to the Cambridge English dictionary, a bureaucracy is a “a system for controlling or managing a country, company, or organisation that is operated by a large number of officials employed to follow rules carefully”.

However, the book portrays a highly simplistic and homogeneous image of such development bodies. Organisations such as Oxfam and ActionAid work more flexibly and innovatively than large government bureaucracies, for example. More significantly, their stated aims differ fundamentally from those of the international bureaucracies described, as both organisations explicitly aim to fulfil human rights and achieve equality for all. Therefore what a gender specialist might do in one of these organisations is very different from the day to day life of a civil servant in DfID or a Development Bank official. This is not really recognised in the book, which makes little reference to job descriptions or any specific mandate that any of the women described or who have contributed chapters are supposed to be working to. In fact, it seems to imply that any gender specialist who attempts to work towards the aims of her organisation, what it calls “working with the grain” (p. 20), might be deserting the cause of feminism.

Promoting gender equality in organisations and their work need not be perceived as a guerrilla war. Understanding poverty as being rooted in inequality in power relations is now widely accepted, and no longer a marginal perspective, when even the World Bank focuses its annual review on Gender Equality and Development (3).

I find this book unhelpful in supporting practitioners in the development of a creative vision for their organisations to work to, which should be about development for all, whether they are women or men, disabled or able-bodied, and whatever ethnic, religious or social group they belong to. Gender specialists should be empowered to argue this creatively and positively with the leadership of the organisations by whom they are employed. One specialist I worked with as a consultant was mentoring her CEO on gender issues on a regular basis, enabling him to develop his own vision of how gender equality related to the organisation’s intent. The class struggle has been replaced by the struggle for recognition by identity groups. As gender specialists, we should take pride in our leading place in this struggle, seeing ourselves as forerunners, rather than backstreet fighters.

The book also fails to provide, with the exception of Aruna Rao’s excellent chapter, a real sense of how the different actions described by gender specialists actually relate to sustainable changes in the lives of women living in poverty. Evaluations of the work of the agencies described are not mentioned, and as the book admits, we have little idea of whether their actions contributed to improvements in the realisation of women’s rights. More money for women’s organisations does not necessarily translate into better lives for their constituents. On the other hand, having carried out and written myself the mid-term evaluation of the Albanian Joint UN Programme on Gender Equality described by Aruna Rao, I know that many important gender equality results have been achieved by what the book calls “feminist bureaucrats”, such as training the police in gender and domestic violence issues. This is what matters, not whether they are ‘good feminists’ or not. As the book says, there are as many ways of being a feminist as there are women, and moral one-upmanship on this matter is futile. As for me, my feminism is closely linked to promoting peace and reconciliation in our world, and leaving the war games to the boys!

Feminists in Development Organizations: Change from the margins is published by Practical Action
Review originally published in Gender & Development 22.2 (2014)