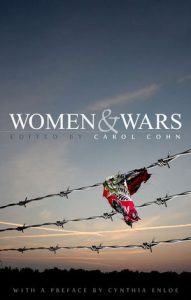 As Cynthia Enloe’s charming and insightful foreword to this volume makes clear, ‘gender analysis is a skill… To develop gender analytical skills, one has to put one’s mind to it, work at it, be willing to be taught by others who know more about how to do it than you do’ (p. xv, emphasis in original). In this book, Carol Cohn has collected together contributions from a number of authors whose skills in gender analysis are unimpeachable, and I would venture that we all have much to learn from them.

The volume is comprised of ten chapters addressing different aspects of war, militarism, militarisation, and post-conflict; each of the contributions engages, in rich empirical detail, the different ways in which war has an impact on the lives of women and the ways in which women are agents in each of the distinct, yet overlapping, aspects of war.

As well as showcasing the research of a number of eminent feminist scholars, each lucid and engaging chapter is organised as a teaching resource, with questions for discussion and suggestions for further reading. If I were to deliver a course or module focused on the topic of‘women and wars’, this is without a doubt the textbook I would choose; the book will also be useful to scholars and researchers, those beginning their research career in particular. The book should also be mandatory reading for anyone who is not yet convinced of the need to take questions of gender seriously and investigate how - and why - gender matters to (and in) wars.

In this short review I cannot engage in lengthy discussion of each chapter in detail, so I will focus on what were, for me, some highlights. Pamela DeLargy’s chapter on ‘Sexual Violence and Women’s Health in War’ (pp. 54-79) offers an extension to debatesabout conflict-related sexual violence (CRSV) that is both meaningful and significant. While Pamela DeLargy covers the basics regarding the various interpretations of CRSV that circulate in academic and policy literature on this topic (pp. 60-5), she also makes explicit the corollary impact on women’s health, specifically their reproductive health, an associated risk that is largely left unexplored in relevant debates. This move is particularly important in its capacity to remind readers that CRSV is not simply an event in the lives of survivors/victims, but that such violence has long-term implications for the physical and psychological well-being of individuals and communities more broadly.

At the outset of her chapter on ‘Women, Girls and Non-state Armed Opposition Groups’ (pp. 146-68), Dyan Mazurana teases out the complex political implications of definitive terminology, arguing that terms such as ‘terrorist’ ‘are increasingly used as a way to dull rigorous thinking and curiosity about a group, its history and its demands’ (p. 147). I applaud this reminder of the need for contextual analysis, and the rest of the contribution proceeds in a similarly nuanced and sophisticated fashion. Dyan Mazurana provides a fascinating discussion of the roles played by women and girls in non-state armed opposition groups and makes clear the importance of distinguishing between these categories of identity, with women performing different roles - and being treated according to different sets of gendered assumptions - to the roles performed by girls.

Carol Cohn’s framing chapter (pp. 1-35), however, is to my mind the most impressive of those featured in this volume. In her typically insightful fashion, Carol Cohn not only provides a persuasive account of the need for specificity, summarised neatly in her first section which is titled ‘Which women? Which wars?’, but also maps out clearly and logically how the contributors to the volume approach thinking about gender (pp. 3-20) and thinking about wars (pp. 20-30). Carol Cohn’s overviews of these concepts are detailed yet accessible; she distinguishes between gender as a power relation, gender as an identity category (dealing with the multiple conceptualisations of the relationship between ‘sex’ [often assumed to refer to the biological truth of the body] and ‘gender’ [often assumed to refer to the social meanings attributed to the body]), and gender as a system of meanings that underlie social processes.

The link Carol Cohn makes between gender and war, having explained that gender is ‘a ‘‘doing’’, more like a performance, than a ‘‘being’’’ (p. 9), is particularly noteworthy and bears quoting at length:

“This conception of gender also helps shift from a frame of unitary, opposed categories of  masculinity and femininity to a more complex vision of multiple masculinities and femininities…Why is this last point particularly important to the study of war? If war hinges on disempowering one’s opponent, and gender difference encodes power, then manipulating gender can be deployed as a tactic of disempowering.” (p. 10)

In other words, if war relies on strategies of disempowerment, and power in part relies upon the stability of gender identity, then tactics that threaten that stability should be considered as a part of warfare. According to Carol Cohn and her fellow contributors, we cannot fully understand war without understanding gender dynamics; to assume that we can, or to assume that the concept of gender is simply a stand-in for ‘women’ which as a category can then be treated in an uncritical and homogenous fashion (compare with Terrell Carver 1996), is to produce a thin and partial account of complex political processes.   I will use this chapter in my own teaching, for its value is enormous in drawing out the links between gender and violence, and using these links to situate the thematic concerns of the book. To my mind, the very best academic work makes its reader sit up and take notice, either because the ideas are unfamiliar or because familiar ideas have been articulated in a new and engaging way. The individual chapters in this volume do both of these things, and as such it deserves to be well received and widely read.