Building Inclusive Cities:
Women’s Safety and the Right to the City 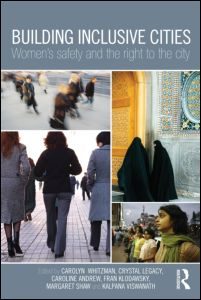 This is an important and timely edited collection that comprehensively addresses the highly topical issue of women’s safety in cities. The book’s contents are the outcome of a decade of research, as well as three important international conferences, intended to create a movement to increase women’s safety and inclusion in cities.

The underlying rationale of the movement at a practical level is that women ‘have just as much right to go out and use public spaces as men’ (p. 4), with the need to focus on strategies at community and local level, and on the responsibilities of city governments, rather than blaming individual women.

The book starts by identifying a range of challenges, particularly those trends likely to increase, such as urban growth, rural/urban migration, the polarisation of wealth and poverty, and the environment and climate change.

However, the book’s significance is in its particular emphasis; this relates less to the marginalisation of women as victims, and more to the opportunities that cities and city life offers, thereby placing women and girls as active and important participants in decision-making around urban futures. The focus, therefore, is on identifying resources, strategies, tools, and practices that have been developed, and describing the ways in which positive changes can be made, sustained, and built upon.

To meet this objective, the book is divided into three parts that move from theory through to practice. To this end, Part I deals with Challenges and Opportunities; Part II with Interventions, and Part III with Tools. Part I sets the scene, with three informative chapters; Fran Klodawsky discussing gendered livelihoods in cities, Sara Ortiz Escalante and Elizabeth L. Sweet focusing on the safety experiences of migrant women, and Carolyn Whitzman examining women’s safety and mobility - with urban transport reconsidered and its linkages to women’s rights to the city identified. In each chapter useful case study examples illustrate issues raised.

Part II turns to Intervention, with four innovative chapters each in turn providing fascinating description of recent action research programmes, different in scale and focus, but all identifying the centrality of building partnerships around women’s safety with a range of city-level stakeholders. First is Kalpana Viswanath’s chapter on the important Gender Inclusive Cities Programme (GISP) with its associated methodology, the Women’s Safety Audits (WSA). Her quantitative results on the anatomy of gendered fear and violence from its four-city project highlight similarities and differences in cities across the globe. The chapter reflects on the local complexity of partnerships and the importance of micro-level detail. This theme of partnerships is further explored in Caroline Andrew and Crystal Legacy’s critical assessment of partnerships between community-based feminist or women-centred groups and local governments, which raise the issue of co-option. The authors argue that only empirical evaluations can show whether partnerships lead to improvements in women’s lives, illustrating this with a case study of a Canadian-based partnership established by Women in Cities International. This shows that these are long-term processes, rather than short-term ‘fixes’. In her chapter on collaboration towards a shared vision, Barbara Holtmann introduces a somewhat complex methodology for facilitating safety strategies which she describes as a:

“social transformation model that follows a process and delivers a systems model and action plans for a safe community in which opportunity abound. The model specifically makes use of the idea of safety and its opposite unsafety, as a conscious turn away from the idea of security which carried with it a perceived threat or danger — and a mode of operation and thought that concerns crime, violence and criminal justice.” (p. 103)

Her chapter describes the methodology’s evolution, working with the South African Police Service in the Central Karoo in South Africa, and then illustrates its use with a range of other groups, culminating in the Third International Conference for the Safety of Women in Cities, held in Delhi in 2010. The fourth chapter in the Implementation section turns to a well-known problem in cities across the world, namely the lack of adequate physical infrastructure. In reporting the results from Delhi of an Action Research Project on Women’s Rights to Water and Sanitation in Asian Cities, Prabha Khosla and Suneeta Dhar show how the WSA methodology identifies gendered safety issues associated with inadequate infrastructure such as water, toilets, and drainage - in this way providing an important new perspective of a long-recognised urban challenge.

Part III, categorised as Tools, covers an impressive range of issues, many of which go beyond women’s safety in cities, and are highly relevant to broader ongoing gender debates. Foremost is a negative critique of the limitations of both gender mainstreaming and equality-impact assessments, and the recommendation that intersectionality is a more inclusive approach for both research and practice. Further innovative tools relate to safer discursive space and include interventions that create ‘alternative’ public art, as well as on-line action research, with Melanie Lambrick’s chapter illustrated by a range of concrete examples from different cities. Finally, Margaret Shaw takes on the contentious issue of results-based monitoring and evaluation - again of considerable importance for a broad range of feminist researchers and practitioners. Her thoughtful, comprehensive review of evaluation as a political process discusses the limitations of both results-based management and theory-of-change approaches, as well as describing attempts to develop more meaningful evaluation strategies in some of the women and safety projects described in earlier chapters.

While each chapter stands in itself, it is the book in totality which makes it essential reading for academics and practitioners alike. Not only does it convincingly make the case for the importance of women’s safety and rights to the city, it also demonstrates that gender interests and needs, in this case relating to urban safety, are so complex and diverse that they have come to merit their own movement, agenda, tools, and techniques, and above all associated international conferences. This surely demonstrates that the days when global jamborees, such as Beijing, are relevant, are now long gone!

Building Inclusive Cities: Women’s Safety and the Right to the City is
published by Routledge