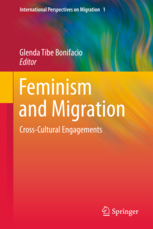 One of the most distinct characteristics of the contemporary migratory phenomenon has been the rapidly rising participation of women. Whilst gender as a frame of analysis has been included in migration scholarship for some time, the relationship between feminism and migration has not been widely ecognised.

According to the contributors of Feminism & Migration: Cross Cultural Engagements, a feminist perspective on female migrants goes beyond positioning them as ‘members of families’ or as a generalised category of ‘immigrants’ (Jamarani, p. 151). This perspective allows for an analysis of feminism as a form of practice in the daily lives of female migrants.

The book’s 15 chapters are split into four thematic sections: I: Theorising feminism in migration; II: Contesting identities and agency; III: Resistance and social justice; and IV: Religion for change. Each section builds upon the previous one through empirical research and analysis, and this makes the collection highly accessible.

The book, influenced by third-wave feminism, recognises the presence of multiple feminisms in its examination of the interface between migration and feminism. In their respective chapters, Glenda Tibe Bonifacio and MariaCaterina La Barbera highlight the importance of intersectionality as a crucial aspect of any analysis of feminism and migration, and such an approach does indeed run through each chapter, with ample thought being given to the intersections of, for example, class and ethnicity with gender. Empirical data from a broad range of geographical locations, including Australia, Belgium, Eastern Europe, and the United States is presented, and contributors make use of a variety of methodologies, including archival research, oral history, multi-sited ethnography, and intercultural research, demonstrating the value that such methodologies, when informed by feminism, can bring to migration research.

The strength of the collection lies in the contributors’ recognition of the contradictions and complexities of migration. Migration can be both an empowering and disempowering experience, and even the notion of ‘empowerment’ is subject to multiple understandings. The contributors delicately balance the empowering aspects of migration, whilst acknowledging that there is not a linear trajectory towards ‘freedom’ that women experience as a result of migration. Maryam Jamarani, in her study of Iranian immigrant women in Australia, suggests that it is often assumed that when women enter less patriarchal societies, they may gain a greater sense of self, and more independence, and question traditional privileges enjoyed by men. However, Maryam Jamarani demonstrates that the extent of women’s empowerment is also dependent on other factors, such as community ties and the strength of the patriarchal family. Laura Menin, in her chapter on migrants in the Italian context, highlights how migrant women often do not identify with the feminist agenda or with the model of the ‘emancipated’ woman. Instead, the narratives of these migrants show the multiple ways of experiencing gender oppressions, whilst also expressing different modes of conceptualising ‘agency’, ‘selfhood’, and ‘resistance’ in daily life’ (p. 259).

The authors recognise the ways in which host societies offer migrant women many ways to challenge, transform, or negotiate traditional understandings of womanhood, women’s work, and identities. Glenda Tibe Bonifacio, the book’s editor, argues that ‘in doing so, these women, arguably, engage in feminist practice and become feminists on their own sans the label’ (p. 6). Jackleen M. Salem, who focuses on activism amongst immigrant Muslim women in Chicago, labels the women’s practice ‘feminist’, when they actually reject this label themselves. She highlights that ‘for these women, Muslim activism is largely based on less fighting for the rights of gender but more on championing the values of social justice and reform’ (p. 299). Both Glenda Tibe Bonifacio and Jackleen M. Salem acknowledge the difficulties in defining such activism as feminist practice. This is problematic, and encapsulates the difficulties in framing actions in terms that the actors themselves do not self-identify with. This could be a problem in further research on feminism and migration. Glenda Tibe Bonifacio urges scholars to see feminist practices of immigrant women beyond activities that are explicitly feminist. A feminist model that sees migrant women as active agents of change, operating on their own or within their own communities and not simply as victims, is welcome. However, caution must be taken when applying labels exogenously to migrant groups.

The book is a well-written and timely addition to the growing body of literature on gender and migration, extending the analysis to include feminist practice and the challenges that this poses. The depth of the material in this volume, particularly on the contradictions and complexities of migration, will appeal to feminist and migration scholars, as well as activists involved in migrants’ and women’s groups. However, although the intersections of gender and class, race, religion, and ethnicity are analysed through a range of empirical research, sexuality does not feature in any of the contributions to this volume. The book would have benefited from such an inclusion, as there is a dearth of research on this area. The contributors, nonetheless, engage in a continuing dialogue and outline the different forms that feminism can take across different cultures, as practised by migrant women in host societies.