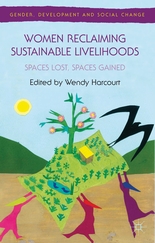 Women Reclaiming Sustainable Livelihoods is an edited volume of exciting contributions aimed at challenging the inequalities inherent in gender relations and livelihoods within the context of current economic development policy and agricultural and community practices.

Specifically, it represents a collective effort of international scholars and activists to use the crises of the last decade (for example, disappointments from failure to uphold the promises of the 1992 Earth Summit, the United Nations (UN) Climate Change talks in Copenhagen in 2009, and the 2008 financial crisis) as an opportunity to ‘open spaces’ to promote political dialogue on the need for economic, social, and ecological change in the wake of Rio20 (the UN Conference on Sustainable Development in 2012).

Its key argument is that the ‘current development trend towards ‘‘eco-efficiency’’ has obfuscated inequities in the gender
distribution of production/reproduction and consumption work’ (p. 1). It draws on a variety of examples of how women across the world (Brazil, UK, India, Italy, Mexico, New Zealand, Tanzania, Netherlands, Uruguay, and the USA) are negotiating different power structures to maintain or revive local economies and environments.

The book opens with an excellent introduction from Wendy Harcourt, followed by Sumi Krishna’s chapter which sets the scene for remaining chapters by arguing for a realignment of the sustainable livelihoods approach, in order to be more sensitive to gender issues through the incorporation of ‘collective political action’ into the approach.

The book is divided into three parts: framing gender and livelihood concerns today; gender and livelihoods in place; and emerging issues for gender and livelihoods. Throughout, the different chapters address a number of key themes, such as the spaces gained and lost by women as they struggle to secure livelihoods in different economic and political arenas ranging from agricultural value chains to co-operatives and small businesses. The different chapters highlight the emerging new knowledge and debates around issues of development, environment, economy, and technology, drawing on examples of using gender analysis in agricultural value chains, deconstructing science and product life-cycles, as well as the challenges and opportunities of new technologies. It also interrogates the role of business in ensuring the sustainable supply of commodities and the potential of citizen associations to push forwards agendas of change. The book also makes important contributions to thinking about how rethinking sustainable livelihoods can be
achieved in practice.

I particularly enjoyed the first section of the book. Those interested in grasping the changing policy arena of gender and sustainable livelihoods will be helped by Irene Dankleman’s historical account of the shifting UN landscape and Kathleen Sexsmith’s examination of the UN’s ten-year framework on Sustainable Consumption and Production. Irene Dankleman’s personal reflection provides a valuable contribution to wider discussions on the dangers of ‘green-washing’ and co-option of sustainable development within development debates. This contrasts with Gretchen Bloom’s more positive ‘insider account’ of the victories that have been gained for women with the transition from Women in Development (WID) to Gender and Development (GAD). The addition of the voices of women activists and academics involved in the struggle of reclaiming sustainable livelihoods for women is a particular strength of this book. Gretchen Bloom notes that whilst there have been important gains in the ‘gender architecture’ for women, the problem is that these gains are not being capitalised on. She also highlights the need to involve men as allies in the fight for gender equality. Noortje Verhart and Rhiannon Pyburn’s focus on agricultural value chains as a vehicle to illustrate the crucial contribution of women to the economy in both
productive and reproductive work highlights how ‘upgrading’ can help women reclaim some of the spaces lost. Aruna Rao’s chapter extends these themes within the context of global agricultural policies, and highlights the danger of the ‘bureaucratic trap’, where the prioritisation of technical skills and products has undermined the value of the social. She concludes that an action-learning approach will promote a greater sense of ownership and enable organisations to discover their own trajectory for bringing about gender equality.

Part 2 provides a rich collection of different examples of women’s struggles to access and control resources in the economy from around the world, in the context ofco-operatives, alternative local economies, microfinance, post-conflict, peasant culture, and land rights. Molly Scott Cato provides a thought-provoking account of how capitalist economies are incompatible with sustainability. Rather, she draws on Karl Polanyi’s view of the economy as embedded in social and environmental relationships to make a compelling case for the alternative of a co-operative economy which would strengthen women’s role in the sustainable future economy. Part 3 tackles new, emerging issues for gender and livelihoods, highlighting how women can engage creatively with emerging technologies such as new genetics and biotechnology (see Chapter 15, by Liliana Acero). Similarly, in their chapter, Ana Agostino and Rosa Lizarde explain their adoption of an innovative advocacy strategy through engaging the support of feminists, environmentalists, and media to set up ‘Gender and Climate Justice tribunals’ to challenge agricultural practices, and trade and economic agreements that have aggravated climate change.

In the Introduction, Women Reclaiming Sustainable Livelihoods promises to provide ‘compelling stories about how women are able and will reclaim their role in sustaining their own and the community livelihoods in ways that will shape more equitable and more sustainable development pathways’ (p. 11). Does the book fulfil this promise? The answer is a resounding yes, the work providing a timely contribution to key debates on gender and sustainable development as these issues come centre stage via Rio20. To my mind, the book’s most important contribution is its critique of the current economic model, particularly how it has devalued women’s reproductive work and ignored their contribution to production. I would, however, have welcomed a more detailed reflection on the role of gender mainstreaming as women reclaim sustainable livelihoods. Nevertheless, the book’s diversity of contributions from academics, activists, and practitioners provides a rich and varied selection of different voices on the issues of sustainability and gender from around the world that will be of interest to a varied audience comprising students and academics as well as activists and practitioners working in the field of sustainable development, gender, and feminist studies.