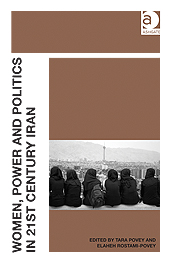 This edited volume consists of 12 essays by women who, except for one of the contributors and the two editors, live and work in Iran. It is refreshing to see women self-represent rather than always being represented by others.

This, though, raises expectations that we will get new analyses and new information about the lives of Iran’s female population post-1979 revolution from women inside the country. The scope of this volume, however, is much more limited than the title suggests. Firstly, the papers cover aspects of women’s lives in Iran from the 1990s only. Secondly, most of the papers share and advocate a perspective similar to that of the reformist faction, which once promised much, within the present establishment in Iran.

Several of the contributors are insiders, having held at one point positions within the Islamic state. As such, they embody the views of only one section of the female population and of the women’s movement; those of believing Muslim women.

As in most edited volumes, the contributions here are not even in their quality and rigour. Further, given Iran’s Islamic government’s appalling record of repression, the contributors from inside the country have perhaps had to be careful and cautious in their narration. This fact, together with their specific standpoint, makes the information they offer on various aspects of women’s experience under Islamic rule partial and incomplete.

In the Introduction to the volume, Elaheh Rostami-Povey, one of the editors, following the simple dichotomy of Orientalist/anti-Orientalist perspectives, critiques stereotypes of Muslim women, and undertakes to show Iranian women’s continued struggle for their rights. But
this struggle, in her analysis, started only in the 1990s under the Muslim reformists (or ‘Islamic modernists’) who she claims put ‘women’s issues on the
national political agenda’ (p. 4). This claim obscures the genesis of women’s struggle against the Islamic government since its inception in 1979 (putting aside the long history of women’s struggles in the pre-revolutionary period, which is not the focus of the book). The women’s resistance movement, in fact, began with the massive, week-long protests against Ayatollah Khomeini’s pronouncement on mandatory hijab and the banning of women from holding the position of judge in courts of law - a struggle that has had its ebbs and flows over the last 33 years, but has continued through a variety of means. The glaring omission of secular left or liberal feminists and other non-religious forms of activisms in what this author identifies as the ‘indigenous women’s movement’ ironically validates the ‘orientalist stereotypes’ that all women and men in Muslim-majority societies are believing and/or practising Muslims.

Elaheh Rostami-Povey does make passing references to the ‘authoritarian’ and ‘patriarchal’ nature of the ‘religio-political state and society’ in
today’s Iran (p. 4). But much emphasis is laid on the ‘battle’ between the ‘conservative’ and ‘reformist’ elements within the regime over the status of women in the family and society (p. 4). This emphasis denies women’s agency, and gives the (wrong) impression that women’s issues came to the surface because of the differences between the two factions within the Islamic regime. It also contradicts the editors’ earlier correct assessment that ‘the more this authoritarian state denies women’s rights and democracy, the more women and men challenge the status quo and conservative ideologies’ (p. 3). It was indeed Iranian women (very few with any attachments to either factions of the Islamic regime) who seriously challenged ‘conservative ideologies’ from the inception of the new regime.

Elaheh Rostami-Povey also provides a very selective general overview of Iran’s recent history in Chapter 2. She asserts that during the 1970s ‘[w]ithin the secular left there was ignorance and lack of interest in women’s issues’ (p. 24). In accordance with such a view, no specific account is included in this survey of the burgeoning secular women’s groups during and immediately after the revolution and following the consolidation of clerical rule, almost all of them affiliated to left and liberal organisations. Lily Farhadpour’s analysis of women in the media and journalism, in Chapter 6, does provide a partial list of these women’s groups. Despite their serious weaknesses, which I have discussed elsewhere, such groups played a significant role in exposing the reactionary policies of the new regime. Neither does the ‘historical account’ of the women’s movement in 21st-century Iran make any reference to the pivotal role of the consciousness-raising activities of various loosely organised groupsof women at the grass-roots level, such as the celebrated One Million Signatures Campaign (yek melion emza), launched by a group of feminists in 2006, and also the very effective Demand-based Movement (Jonbesh-e motalebeh mehvar) during the botched 2009 presidential elections. One wonders if they are not considered part of the ‘indigenous’ movement favoured by the author.

Elaheh Rostami-Povey does mention the difficulties faced by women in Iran as a result of the imposition of conservative religious ideologies. But she, at the same time, praises the Islamic state as it has ‘distributed wealth and provided social welfare to the majority of the population’ (p. 25), or that it has ‘pressed ahead with genuine redistribution of wealth’ (p. 27).

A most serious problem with the chapter is that the author chooses to accuse some other activists inside Iran of favouring ‘foreign interventions including attacks by the US and Israel on Iran’ (p. 30). This accusation is a deliberate misinterpretation of the dissenting views within Iran’s democracy movement, echoing the views of the security establishment in Iran, and seriously endangering these individuals inside the country.

The rest of the chapters deal with important issues ranging from women’s education and employment, women in the arts and in the political process, and to different degrees shed some light on the lived experiences of Iranian women. The education of women, discussed by Khadijeh Aryan, has been a major source of confrontation with the Islamic regime. Access to post-secondary education could not be easily denied to women as women constituted 30 per cent of university students in the pre-revolutionary period. The stunning success of female students in passing university entrance exams and entering universities has led to female students forming the majority of university students (p. 45). It should, however, be mentioned that in the summer of 2012, the government effectively banned women from enrolling on over 70 different undergraduate courses.

As for women’s employment, Zahra Nejadbahram asserts in her chapter that the 1979 revolution, the Islamisation of state and society, (mandatory) hijab and sex segregation opened up opportunities for many religious and working-class women to enter the public domain (p. 75). This is highly questionable, as the share of women in the total economically active population actually dropped from the pre-revolution figure of 14.8 per cent in 1976 to 10.2 per cent in 1986. In addition, even though this percentage increased in the mid-1990s to 12.7 per cent, given the dramatic population growth the female participation rate remained below the pre-revolutionary figure.

[For a thorough analysis of female labour force participation in post-revolution Iran, see Nomani and Behdad (2006, chap. 6) and also Moghissi (1999, chap. 6).] The chapters on Iranian women’s increasing visibility both to themselves as individuals and to others, through the arts, by Mehri Honarbin-Holliday, and gender roles in the Iranian media, by Lily Farhadpour, are most interesting and informative. The poignant account of the experiences of female journalists, including Lily Farhadpour herself, in Iran, and the pressures they feel in the male-centred culture of the profession, as well as the political repression, is instructive. In Chapters Seven and Eight, by Jamileh Kadivar, the analyses of why women are not allowed to work as judges nor to assume the position of the president are based on the familiar argument that the only obstacle to women in this area is what the authors see as the erroneous, patriarchal interpretation of the Quran, the Sharia and the Hadith (p. 118).

The chapters on women in the parliament, by Elaheh Koolaee and Massoumeh Ebtekar, President Khatami’s appointed head of the Department of Environment, focus on the achievements of women from inside the establishment. Massoumeh Ebtekar’s piece is perhaps the weakest of all chapters, as the author, following a general discussion of Western media’s mistaken perceptions about Islam and women in Iran, goes on to provide a lengthy account of the job descriptions of the women she appointed in her Department and the performance reports of her department at the time. The final chapter, by Tara Povey, the second editor, provides an interesting account of the dynamics of women’s resistance, particularly in the aftermath of the 2009 presidential elections. However, her use of the undifferentiated and homogenising term ‘Iranian women’ is problematic. We read, ‘Iranian women activists do not see Islam as oppressive; rather they see constructive traditions, political structures and social structures such as the family as standing in the way of women’s progress’ (p. 193). This is a heroic effort to absolve the determining role of Islamic gendered legal and social prescriptions for the family and the social and political structures that she blames for subjugation of women. As such, it contradicts the main line of argument running through the whole volume, which is that what blocks the advancement of women’s rights and social status in Iran is one particular Islam, that is conservative, authoritarian, and patriarchal, as opposed to the moderate Islam that these authors embrace.

In the end, no matter how evident and admirable the efforts of Muslim women who seek reforms are, the idea that they can bring about major changes in the status of women without the active support of other progressive forces (be they secular or religious) and without a major push to weaken the growing influence and ideological and practical dominance of fundamentalist Islamists, will remain more a desire than a possibility.

Women, Power and Politics in 21st Century Iran is published by
Ashgate