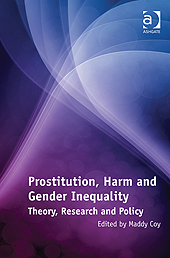 The past two decades have witnessed an unprecedented expansion of the global sex industry. Lap dancing, pornography, and the trade’s quintessential ‘product’ prostitution now generate huge annual profits for pimps, pornographers, and other sex industry business owners. In the UK alone, the number of men paying for sex acts doubled in the 1990s. The consequences have been profound  for the women whose bodies constitute the ‘raw materials’ of this trade and for relations between women and men more broadly. Enabling the growth of the industry and insulating it from critique has been a hugely successful campaign to rid prostitution of its associations with exploitation and rebrand it as ‘sex work’.

Harms attendant to prostitution are framed as resulting from the failure of society and state to recognise prostitution as a job like any other, as opposed to an inherently harmful and exploitative transaction, and it is a claim that has influenced funding, policy, and legislative programmes around the world.

Thank goodness, then, for Maddy Coy and the authors whose collected articles make up Prostitution, Harm and Gender Inequality. In this hugely important work, the authors expose prostitution as a fundamental practice of gender inequality. It is shown to be both a cause and a consequence of unequal relations between women and men. Together the works blast through the fog of neoliberal rhetoric around individual choice and agency, and using evidence-based analysis place the harms inherent to prostitution centre-stage. Maddy Coy’s own experiences of working with women in prostitution, as well as her wide-ranging academic research into the industry, are reflected in the rich range of perspectives from which these papers approach the issue. While the market-based language of ‘sex work’ seeks to make it invisible, these articles are united in recognising prostitution as a fundamentally gendered practice: it is overwhelmingly women who are sold, and men who buy access to their bodies in a context of gender inequality.

The chapters take a panoramic approach to the issue of prostitution, exploring women’s routes into prostitution, their experiences once there, the male demand driving the industry, theoretical interpretations, and responses from governments and the international human rights community. Drawing on empirical evidence of women recruited into prostitution in the USA, Jody Raphael reveals how processes of coercion used to entrap such women constitute domestic trafficking, and yet a focus on transnational trafficking and the dominant narrative of individual choice and agency frequently renders such systematic exploitation invisible to policymakers. The work challenges the oft-assumed distinction between free and forced prostitution, particularly in policy responses to trafficking.

Chapters by Maddy Coy and Meagan Tyler explore women’s experiences once in prostitution. Meagan Tyler draws on a raft of sociological evidence to reveal how sexual and physical violence, as well as psychological harm, is endemic in women’s experiences of prostitution. This is regardless of whether the setting is indoor or outdoor, legal or illegal. In a brilliant feminist analysis of this research, Meagan Tyler develops the compelling concept of the ‘sex of prostitution’ / arguing that characteristics intrinsic to the model of sex in prostitution mean it is inherently harmful. Maddy Coy’s own research, involving life story interviews and arts workshops, movingly illustrates how the sex of prostitution can damage and disrupt women’s relationship with their bodies.

Maddy Coy and Meagan Tyler’s work exemplifies the nuanced character of the articles contained in Prostitution, Harm and Gender Inequality. There are no crude dichotomies or simplistic explanations, but instead recognition that, for instance, women’s routes into and experiences of prostitution are multi-faceted; and that it is both the inherent ‘sex of prostitution’ and contextual factors such as stigma and criminalisation of women in prostitution that generate widespread harms experiencedby women. The complexity of experiences and power structures at play in prostitutionare well captured by Maddy Coy in her conceptualisation of prostitution as a gender regime: ‘[prostitution] reflects and reproduces unequal gender orders even though there may be variation at the level of everyday gender relations between women who sell, and men who buy, sex … the harms of prostitution are both individual and systemic: prostitution as a gender regime reproduces gender as a hierarchy and thus undermines movements towards gender equality’ (pp. 4-5).

The chapters here also put front and centre what is so often absent from discussions on prostitution: the male demand driving the industry and the pimps and prostitution business owners profiting from it. This is a crucial corrective to narratives that artificially shrink the analytical gaze to focus only on specific and individual acts of ‘agency’ exhibited by women in prostitution, distorting the full picture of the power at play in prostitution. In their survey of UK men who pay for sex, Maddy Coy, Miranda Horvath, and Liz Kelly put the lie to assumptions that prostitution is inevitable because, crudely, ‘men will be men’. To start with, it is only a minority of men who pay for sex. Of those that do, the authors found that they are demographically similar and their decisions about using women in prostitution are shaped by cultures of masculinity, the legal context, and ‘the increasing commodification of intimacy and sexualization’ (p. 137). One study participant described paying a woman for sex as ‘like paying for a cab instead of walking’ (p. 132).

The issue of legal frameworks is picked up by Mary Lucille Sullivan and Josefina Erikson in their contrasting accounts of policy responses to prostitution. Mary Lucille Sullivan exposes how the main beneficiaries of legalisation/decriminalisation approaches in some states of Australia have been those who buy sex as well as owners of prostitution businesses. Demand for prostitution has increased, accompanied by a large expansion of both the legal and illegal brothel trade. Conversely, Josefina Erikson reveals that a decade after Sweden became the first country to criminalise the buying of sex acts while decriminalising those selling sex, prostitution had decreased /with street prostitution halved and public support for the legislation at 70 per cent. At the heart of the latter policy was the recognition that prostitution is fundamentally incompatible with gender equality.

The quality of evidence-based analysis contained in Prostitution, Harm and Gender Equality acts as a damning expose´ of the failures of so much theorising on prostitution to interrogate notions of ‘choice’ and ‘agency’ and to take account of the context and power relations within which prostitution occurs. Sheila Jeffreys traces how this has influenced gender and development theory as well as shaping funding decisions on the ground. She argues that HIV and AIDS prevention funding channelled towards pro-‘sex work’ organisations employing this neoliberal framing of prostitution has enabled ‘the creation of a strong, international pro-sex work lobby group’(p. 71). Sheila Jeffreys also develops the very useful concept of recognising prostitution as a harmful cultural practice - meeting as it does the criteria set out by the United Nations Special Rapporteur on violence against women.

Prostitution, Harm and Gender Inequality is crucial reading for academics, practitioners, and activists. What the research and analysis attest to is that as long as society tolerates or even enables prostitution, there can be no equality for women. It also demonstrates that there is an alternative. All the key elements that feed the prostitution industry are socially constructed, whether it be male demand, the exploitation and marginalisation that marks out an entry into prostitution, or the conducive context provided by the normalisation of the sex industry in mainstream culture. The effectiveness of the ‘Nordic model’ in tackling prostitution, whereby those who purchase sexual acts are criminalised but those who sell them are decriminalised, provides a crucial route forward in global efforts to promote gender equality and to end commercial sexual exploitation. Prostitution, Harm and Gender Inequality is an important contribution to the growing global resistance to the sex industry.

Review ©2013 Kat Banyard, author of The Equality Illusion: The Truth About Women and Men Today

Prostitution, Harm and Gender Inequality: Theory, Research and Policy is published by Ashgate