Gender, Roads and Mobility in Asia 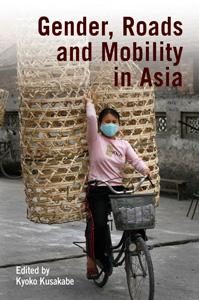 In the 1950s and 1960s, development thinking was dominated by an emphasis on infrastructure, irrigation and things ‘concrete.’ Economists and engineers were the key players, and running in parallel was the dominant convention of top down planning.

Since the 1990s, while economists and engineers still influence this dominant model, there has been a much greater emphasis put on human development. The book Gender, Roads and Mobility in Asia is a welcome contribution to the gender and development literature, as it crosses conventional boundaries, bringing gender analysis into the traditionally male realm of transport and infrastructure.

The book focuses on multicultural, though what is still a predominantly male-oriented Asia. Contributors to the book are an interesting combination of male and female, Western and Eastern schooled, social and are behavioural scientists (sociologists, economists, demographers and other mainstream disciplines), interdisciplinary researchers (urban planners, foresters), applied scientists (engineers and architects) as well as a few professionals from the development sector (gender specialists, ‘development practitioners’ in HIV and AIDS, maternal health, and management experts,). The book confidently addresses a specific audience of technical planners and academics, something, it should be noted, that is reflected in the language and methodologies used by the book’s contributors.

In her introduction, Kyoko Kusakabe echoes the assertions of previous authors of gender and transport literature, that ‘‘huge strides are being made in highway development and regional economic integration, and the connections between mobility and livelihood are extremely dynamic’’ (p. 7). This collection of case studies is both timely and important for two reasons. The first is the attention focused on the links between transport and gender relations in very diverse contexts in the Asian region, overlooked for many decades, and only recently given space in serious development discourse. The book uses a gender lens to uncover aspects of infrastructure development which disempower various groups of women. Gender analysis of the public space takes centre stage. The book conceptualises ‘public’ in several ways. One is by regarding it as the space that is not private, meaning that income-poor women’s lives remain or within or move beyond the traditional confines of the domestic sphere, as in Win Myo Thus’s chapter on the impact of cross-border road construction, in which she looks at women in three types of village in Myanmar: ‘Border’, ‘Highway’ and ‘Distant’ – particularly those
women left behind, both physically and economically, – and the reinforcement of the gender division of labour (something also discussed in a Laotian context in Chapter 6 by Kyoko Kusakabe). Transport and the employment of women vis-a`-vis men is tackled in Chapter 7, by Wang Yuxian and Zhao Qun, in which they discuss changes in trade and business, as well as increase in cash crop production in Yunan, China. Chapter 14, written by Wijitbusaba Marome looks at the gender division of labour in communities of varying social classes in Thailand. ‘‘Public’’ can also mean participation in decision making processes that affect women’s lives. Binjwala Shrestha, in Chapter 20, for example, argues for a comprehensive development plan, which would potentially see better rural transport leading to improved maternal health in Nepal.

The second reason why this book is important is that it raises important questions, not yet voiced in either infrastructure development planning or in gender-responsive planning circles. These questions relate to the intersections of mobility, transport and human development. Kyoko Kusakabe and her co-contributors (Bandana Sharma, p. 180;) believe that these three concepts need to be redefined in their rightful contexts of geographical space (Nguyen Thi Diem Hang et. al, p. 72); of human relations (Kusakabe, p. 50-51); and of multicultural realities, which also raises the lack of visibility of the human development approach (H. Detlef Kammeier, p.31; Upali Pannilage, p. 162-3, and Jun Hada, p.170). Editor Kyoko Kusakabe is to be commended for the book’s straightforward Introduction, which proposes ‘‘a holistic approach to look at not only mobility but various dimensions of capabilities’’ (p. 7). The book’s conclusion likewise, calls for an awareness of the power differences and dynamics involved where they are significant, in order to ‘‘ analyse the linkages further between mobility and power relations especially gender relations’’ (p. 217). The editor is also very honest, making no pretence about the research in the collection embracing a feminist standpoint.

It is here, however, that we uncover the book’s limitations. Participatory research processes, seriously advocated by feminist researchers since the 1990s, are thin on the ground in the collection, save for tools used to gather data from some field site informants. Framing of the research design and data analysis through the voices of grassroots women leaders, community organisations or activist intermediary agencies was not applied Thus, there is a danger of a male-oriented efficiency and anti-poverty policy approach placing the economic, as well as the macro and structural to the fore. I look forward, therefore, to future research weaving in the socio-economic and political, on an equal footing, and incorporating the deep-seated historical and cultural realities of multicultural, complex Asia. This will make room not only for a plurality of perspectives, but for advocacy and action based on women’s views, which are more often than not, excluded from the dominant development debates on transport and infrastructure.