Gender and Society in Turkey:
The Impact of Neoliberal Policies, Political Islam and EU Accession 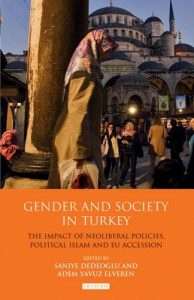 Saniye Dedeoğlu and Adem Elveren’s book Gender and Society in Turkey is a timely work, in the context of the unprecedented  transformations and upheaval in the Middle East. Turkey is often pointed to in the region as the ideal model of a democratic and secular Islamic state. The question of gender relations is critical within this framework, since it is a major axis of democratisation along which most Muslim societies in the region have failed to deliver improvements.

Turkey stands out as an exceptional case, where gender egalitarian legal reforms and women’s entry into the public sphere have a history of almost a century. This collection of papers, by an interdisciplinary group of researchers, goes beyond simply providing a survey of the current status of gender relations in Turkey, to present an evaluation of the interface between neoliberal policies, the European Union (EU) accession process, and the relatively recent phenomenon of rising political Islam, and the effects on gender and society. For me, the book, beyond presenting a very useful resource on the gendered nature of the Turkish welfare state, also provides critical insights into the contradictory forces which both erode and enhance Turkey’s position as a regional, progressive force in gender equality and democracy.

The focus of the 13 chapters of the book is on what can be called the triangular gender trap; namely the welfare system, the labour market, and the care regime. Beyond describing the gendered nature of this triangular structure, the collection also explores the role of the state and recent public policy reforms, as well as its interactions with the conservative agenda of rising political Islam. While the papers detail different aspects of the issue at hand, they complement each other in displaying the broader picture.

The patriarchal nature of the pre-reform social welfare system developed as a mirror reflection of the strong gender segmentation of the Turkish labour market, and both welfare system and labour market rest comfortably on the existing care regime where unpaid care work is undertaken almost exclusively by women. Hence the collection shows the different ways in which a gendered social contract has been institutionalised in Turkey, resulting in what I call ‘vicious cycles of adverse path dependency’. The dynamics of capitalist growth throughout the economic modernisation of the Turkish Republic have been such that they have not generated sufficient labour demand to absorb the abundance of female labour into the labour market. Consequently, the care regime and accompanying institutions, such as the welfare system and the labour market, have been shaped around a male-breadwinner family norm. With these institutions in place, the economic growth process has become less able to pull women into the labour market, leaving many women trapped in a cycle from which it is hard to break out. [In İ. İlkkaracan (2012), I contextualise this situation as one of what institutional economists call ‘adverse path dependency’; the interaction of market growth and emerging institutions creating a disabling environment for women’s integration into the labour market.]

In her chapter, Gülay Toksöz argues that historically, macroeconomic growth processes in Turkey have provided a weak force for women’s integration into the labour market, resulting in one of the lowest female labour market activity rates globally, and dominance of the male-breadwinner model. As the various contributions on the social welfare state all underline, it is the male-breadwinner bias that underlies the patriarchal nature of the Turkish welfare system, whereby most women benefit from social security on the basis of their relationship with men, as husbands or fathers. This has traditionally
created a system of social transfers positively discriminatory to women without male support (for instance, women have access to life-long social security benefits through deceased husbands or fathers as widows and orphans). Yet women’s relatively expanded access to social transfers carries inherent contradictions with regard to policies to promote women’s employment, as Ayşe Buğra points out in her chapter, since such access also acts as a bind on female labour supply, as well as reinforcing traditional gender roles.

Women’s very low rates of labour market activity, made possible to some extent by  their relatively expanded access to social transfers, are also reflected in wide gender gaps in time allocation between paid and unpaid work. In their chapter, Emel Memiş,  Umut Öneş, and Burça Kızılırmak demonstrate
these gaps using recently available time-use data, pointing out the lack of publically provided care services. They argue that this gender division of labour creates further binds on female labour supply. Stimulating contributions by Hande Toğrul on the so-called ‘evlatlık’ phenomenon (girls from low-income
backgrounds adopted by high-income families to help with household chores), as well as by Helga Rittersberger-Kılıç and Sibel KalaycIoğlu on informal child and elder care workers, demonstrate the different components of the care regime as an institutional embodiment of exploitation of women’s unpaid or poorly paid labour. These two contributions also demonstrate the extent to which the triangular gender trap of the welfare state, labour market, and care regime generate and reinforce deep inequalities amongst women and children by class, which is an issue that I believe receives insufficient emphasis in the collection. Gözde Yirmibeşoğlu, in her study on women in labour unions, shows that even when women are actively involved in the labour market and union organising, their traditional role as the care-givers constitutes grounds for differential patterns of participation. A concrete outcome of the gendered patterns of labour market, welfare system, and time-use is the striking gender income gaps presented by Meltem DayIoğlu and Cem Başlevent: the vast majority (62.5 per cent) of working-age women in Turkey do not have any personal income as opposed to only a minority (5.4 per cent) of men (p. 68).

Three important contributions on social security and health reforms of the 2000s, by Mustafa Şahin; Tuba Ağartan; and Şule Şahin and Adem Elveren,
respectively, show that the transformation of the welfare system was instigated by neoliberal policy, with its emphasis on privatisation of the benefits system. The reforms in effect dismantled the patriarchal nature of the welfare system in that the provisions for women’s preferential access to social transfers were eliminated, for example, the equalisation of the retirement age for men and women; and the ending of women’s entitlement to lifelong health benefits through their insured fathers. Yet as these essays demonstrate, the seemingly gender-neutral neoliberal reforms have contributed to women’s increased vulnerability to social risks given that the gender discriminatory patterns of the labour market, in mutual interaction with that of the care regime, have been left untouched. As Saniye Dedeoğlu points out, although the current neoliberal restructuring of the social welfare system ‘…replaced the former paternalistic framework, it made women vulnerable as they have not yet achieved the conditions necessary for independent status in the labour market or in the home’ (p. 131).

As far as gender equality policies are concerned, Saniye Dedeoğlu underscores the role of the EU accession process in contributing to the momentum towards gender egalitarian legal and policy reform. Unless backed up with a strong political commitment to gender equality, however, the EU process is likely to instigate adoption of legal reforms and policies that remain mostly on paper, with limited scope for implementation on the ground. Feride Acar and Gülbanu Altunok’s provocative contribution on the symbolism and political manipulation of the headscarf issue, as well as Saniye Dedeoğlu’s evaluation of the recent debates on gender equality policies in Turkey, leave us with little hope that there will be any strong political commitment to gender equality under the current, religious and conservative AKP government. On the contrary, in the context of rising political Islam, they point to an increasingly conservative social agenda with negative ramifications for gender equality.

Going back to the question of the paradoxical forces at work in Turkey namely those forces that help to erode and those that enhance Turkey’s position as a regional progressive force in gender equality and democracy: the contributions in Saniye Dedeog˘lu and Adem Elveren’s book provide concrete evidence of the eroding effects of the combination of neoliberal economic policies with the social conservatism of political Islam. The EU accession process, however, as also argued in the book, acts as a counteracting progressive force. For me, an additional force is also worthy of mention, although it receives little attention (other than in the contribution by Acar and Altunok) in the book: the presence of a strong and vocal women’s movement in Turkey, which has been crucial in the recent gender equality reforms.

Gender and Society in Turkey: The Impact of Neoliberal Polices, Political Islam and
EU Accession is published by
I.B. Tauris