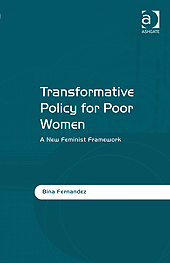 Anyone who has ever had a hand in anti-poverty programmes for women  whether as researcher, practitioner, or evaluator – will have had the experience that Bina Fernandez describes in her new book: of encountering problems that always occur; of blatantly obvious ‘design errors’; of gaps between intention and implementation so big and so predictable you could safely drive a train through.

The get-out-of-jail-free card commonly used when programmes fail ranges from ‘not enough political will’ to ‘the women were too uneducated’ or ‘elite capture/ corruption/bureaucratic indifference derailed a well-intentioned initiative’. All very familiar; what is surprising is that until I read this book, I never really thought of these familiar failings as avoidable.

That I have always tacitly accepted that programmes of this kind go wrong in precisely these kinds of ways might just be an example of the policy ‘foreclosures’ the analysis in the book highlights: anti-poverty programme design often feels like TINA (there is no alternative), when of course, the courage to embrace the messiness of real-world policy implementation could make the difference. For that alone, this is a worthwhile contribution.The point of this dense but rewarding feminist take on anti-poverty policy analysis is to derive a framework that can analyse policies so that the usual errors are avoided, and genuinely transformative policies for poor women result. As someone who moves between academic gender analysis of anti-poverty programmes and the hands-on worlds of programme design and evaluation, I felt the value immediately: it sparked all kinds of ideas for more systematic thinking about what goes wrong, but in particular about what stays off the policy table (unpaid care work) and what we avert our eyes and policy recommendations from in order to be intelligible and relevant (e.g. men, rich and poor, always benefit from programmes intended for poor women).

One of the reasons this book is so valuable is its accessible sweep of theoretical and methodological approaches to policy analysis. The framework itself includes feminist principles within a broadly ‘governmental’ approach, but its purpose is situated within the wider feminist agenda of influencing the policy process in developing countries. The first two chapters review gender and development (GAD) policy literature, dart around salient parts of welfare state theory, Partha Chatterjee on political society, related work on ‘seeing the state’, review Bernard Schaffer on policy analysis, and alight on Nancy Fraser’s redistribution, recognition and representation framework as the criteria for assessing policy performance. From this theoretical review, a fairly eclectic (or appropriately pluralist, as the author argues) framework is derived.

The framework has four main elements. The first is constitutive contexts – context can make and break a policy: the framework is realistic about how the constraints and realities of policymaking are situated in the places in which they get made. The second and third are policy representations and policy practices, which are equally intuitive: what goes on in practice is concerned centrally with the production of meaning and grounded in regimes of practices which target, measure, define, label, and shape the behaviours of the populations with whom they are concerned, not necessarily with coercion. The arguments that create policies by fitting solutions to perceived problems need analysing as the products of power: what remains invisible and unspeakable depends on how the policy is represented and by and to whom. When it comes to the policy consequences, failures and successes owe much to policy ‘escape hatches’ – typically, lame excuses for predictable failures – and institutional conflicts, both in effect, built into many policies that purport to transform the lives of poor women.

Claims that the framework avoids the usual traps of linear conception-design-implementation-evaluation policy thinking were not entirely convincing, as the conceptual categories quite nicely mapped themselves against conventional categories for thinking about policy. Yet the content and the questions raised by the categories were greatly more insightful than the sterile, much-abused idea of a gap between the discrete categories of ‘design’ and ‘practice’.

The framework is applied to the SGSY (Suvarnajayanti Gram Swarozgar Yojanai) programme in India, using primary empirical evidence from Maharashtra and Madhya Pradesh. It is then tested again using secondary material for resonance with the Vaso de Leche programme in Peru, the Bolsa Familia programme in Brazil, and the Malawian Social Action Fund. Part of the value of the empirical work is the use of a novel framework in cases that are mostly quite familiar to the feminist social policy analyst. It helps to see reasonably familiar stories given a fresh interpretation, because this shows off the most novel parts of the framework to their best advantage.

This is no light read, packed with theory and empirical material as it is. Yet
Transformative Policy for Poor Women feels overdue. It feels like the right moment for a serious analytical approach to the failures of policies for poor women. Its insights into how women’s informal economic and unpaid care work overshadow and largely determine development outcomes for poor people seem timely: it’s certainly time these concerns became part of mainstream development policy, if mainstream development policy is as concerned with gender equality as it claims to be. Bina Fernandez might say little about why women’s unpaid care and low-paid informal economy work remain invisible or a low priority on the development policy agenda. But she shows clearly that ignoring the inconvenient realities of women’s lives are precisely the reasons policies fail, again and again and again.

Transformative Policy for Poor Women: A New Feminist Framework is published by Ashgate