Remittances, Gender and Development:
Albania’s Society and Economy in Transition

by Julie Vulnettari and Russell King 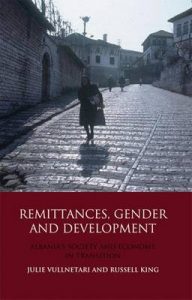 Julie Vulnettari and Russell King’s examination of migration in relation to remittances, gender, and development in the context of Albania and Greece makes a solid contribution to the debate surrounding the so-called ‘migration–development nexus’, by demonstrating how to carry out gender analysis at multiple levels and locations. In clear and concise language, the authors systematically examine each piece of the puzzle – migration, gender, remittances, and development – in their various relationships to one another. They begin by offering a broad theoretical overview of the four parts together, and then focus on how gender operates in the transnational households within which remittances are exchanged. Next, they explain how migration, remittances, and gender operate in the Albanian context, followed by chapters on remittances and gender; remittances and development; and then the four together again, in a comprehensive policy review.

The authors take the middle ground in the debate on whether migration is good or bad for the development of origin countries, avoiding pessimistic and optimistic extremes, and opting instead to identify both benefits and pitfalls. Albania, as they explain, is a veritable laboratory for the workings of migration and remittances, given that its borders were closed until the country’s exit from communism in 1990, at which time a mass exodus took place, mostly to neighbouring Italy and Greece. Twenty years later, 1.44 million Albanians live abroad (equivalent to 45 per cent of the country’s population), and remit funds that represent 9 per cent of the country’s GDP. Julie Vulnettari and Russell King do an excellent job of examining this context in order to tease out the benefits of migration and remittances for families, communities of origin, and different groups of women and men, including ethnic minorities of Roma and Evgjit or ‘Egyptians’, while also noting mixed results and challenges for translating such benefits into broader social and economic development in areas of origin.

Albania, as the authors note, is also a strongly patriarchal country, the migratory flows of which were originally dominated by men, with women migrating later through family reunification. Remittances are still sent almost exclusively by men to their families in the Albanian countryside. Thus, they argue, it is necessary to reframe the gender-related questions being asked. The important analytical question is not whether women are better remitters than men – but rather, what are the gender structures and dynamics that shape migration and remitting strategies?

The book’s strengths lie in its methodology and careful, contextualised analysis. Drawing upon the qualitative research methodology developed by the former UN International Research and Training Institute for the Advancement of Women (UN-INSTRAW, now part of UN WOMEN), Julie Vulnettari and Russell King masterfully combine qualitative and quantitative research methods across multiple locations in a transnational migration corridor, using the results in complementary fashion to first identify patterns, and then to explain. Perhaps the most interesting analysis focuses on the different types of transnational households, including changes taking place within them, sources of conflict, and negotiation of care work. Through this exercise, they discover that paying attention to generation is just as important as gender when deciphering intrahousehold power dynamics. Girls and young women in rural Albania, for example, benefit from remittances by being able to attend university. However, social control over their movement is still strong and greater educational opportunity has yet to translate into skilled and decently paid employment for women in rural Albania.

The authors’ examination of the development impact of remittances takes the important step of moving beyond traditional notions of what constitutes ‘productive’ use of remittances to include investments in life cycle events, such as weddings, and improvements in well-being (home renovation, domestic applicances, for example), while also highlighting structural obstacles and negative impacts such as migration/remitting being a disincentive for male youth to continue their education. Their observations on gender and remittances echo other researchers’ findings, showing: that there are indeed differences in men and women’s priorities for the spending of remittances, that the positive impact of remittances on material well-being in the household can lighten women’s workload, and that the impact of migration and remittances on women’s empowerment is often a mixed bag.

A shortcoming of note is the sometimes uneven application of gender analysis – in some sections almost everything is referred to as ‘gendered’ (almost to a fault), while other sections make no mention of it. In the first instance, the term ‘gendered’ is used so liberally that it can sometimes confuse the reader, running the risk of it losing its meaning altogether. Assuming that the argument is that gender dynamics shape all aspects of migration and remitting strategies in one way or another, what then do terms like ‘gendered transnational household’ or ‘gendered decision-making’ or ‘gendered character of the labour market’ actually tell us? Presumably, the household or decision-making or labour market is gendered no matter what form it takes, so perhaps it would be more useful to simply explain how they are gendered, rather than using gendered as a shorthand adjective. Using ‘gendered’ as an adjective also runs the risk of implying that something is gendered only when women are involved, as in using the term ‘gendered character of the labour market’ to describe how female migrants are channelled into certain sectors, when presumably it is also gendered when mostly male migrants are offered work in construction and agriculture.

The gender analysis offered in some sections is weak, where not missing altogether, as in the discussions of non-monetary remittances, and of the development potential for remittances in agricultural investment, especially apple orchards. This left me wondering: are there gender-related social remittances? How is investment in apple orchards affecting women – will it create employment opportunities for them or might it run the risk of piggybacking on their unpaid labour? Similarly, the policy overview notes the lack of gender perspective and other power imbalances in migration and development policies (i.e. favouring the host country’s interest; conceiving of migrants as males, and females as trafficking victims). However, it stops short of offering recommendations as to how policies might be improved or linked up to promote sustainable development that includes women, beyond de-linking their migration status from their husbands’. What might a gender approach to migration and remittance-related policies look like in this context, beyond the very general advice of promoting women’s participation and avoiding their instrumentalisation?

Finally, it would seem immodest and inaccurate to call the relationship between gender, migration, and remittance-related policies ‘hitherto unexplored’, and to claim to single-handedly ‘empirically rectify’ this lack of gender analysis in the field of remittances. The research leading to the publication of this book was commissioned by a research programme entirely dedicated to the topic at former UN-INSTRAW, now part of UN WOMEN, as recognised in the preface. However, the authors make mention of the theoretical and empirical contributions of this programme, which clearly underpin many of their claims, only in passing in the final chapter of the book. Perhaps it would be more accurate to state that this is the first book-length, detailed study to explore these relationships in the Albanian context, not worldwide.

Shortcomings notwithstanding, Remittances, Gender and Development makes an important contribution to the field, and will be of interest to students of development, researchers, policymakers, and practitioners as an instructive study on migration and development from a gender perspective. The gender analysis offered raises broader questions of rights – not only women’s rights, but the human rights of migrants in destination countries – and leads us to question notions of development. Development for whom? What model of development? Only economic growth, or human development in all of its dimensions? Julie Vulnettari and Russell King remind us that regardless of the more fluid notions of citizenship and nation-states that accompany globalisation, it continues to be governments’ task to create the structural conditions in which migrants’ and their family members’ initiatives can flourish, both in origin and destination.

Remittances, Gender and Development: Albania’s Society and Economy in Transition is published by I.B. Tauris.