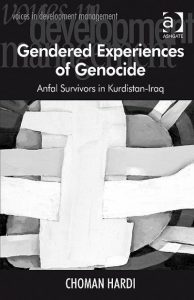 Gendered Experiences of Genocide is, at its best, one of the most powerful accounts of the so-called Anfal campaign against the Kurds in Iraq specifically, or genocide generally, that I have ever had the privilege to read. The author, who herself lived through and escaped Anfal as a teenager, includes an amazing number of harrowing first-hand accounts of this terrible time in Iraqi Kurdistan that has been almost forgotten in dominant histories not only of global politics, but also of Iraq under Saddam Hussein. As a reader, one gets to know women like Shirin (p. 43), whose capture and imprisonment were almost unspeakable.

The personal accounts of more than 70 women survivors runs through the chapters, addressing a number of the different situations women found themselves in during the genocide. Chapter 2 includes the narratives of women who were imprisoned in one of several mass prisons during Anfal, where prisoners were deprived of food and sleep, subject to unsanitary conditions, and often killed. Other chapters talk about the pain and suffering dealt with by Internally Displaced Persons (IDPs) and refugees (Chapter 3) and victims of the gas attacks (Chapter 4). Perhaps the most compelling thing about the book, though, is its dual focus: not only on the suffering during the massacre, but on the rebuilding (Chapter 5) and long-term effects (Chapter 6). As a result, it tells stories of pain and torture alongside stories of survival tactics and redemption – a rare combination (and a refreshing change) for a book documenting genocide.

Perhaps the most compelling thing about Gendered Experiences of Genocide is the power and conviction with which these twin narratives of suffering and survival are told. The author’s career up to this point has been in poetry, and the book is written in a way that only a writer can write – on top of being engaging and accessible even to people unfamiliar with the conflict, it involves the reader emotionally in the victims’ narratives, in the complicated politics, and in the writing of history. The author makes a convincing case that, if they are not told now, these stories and the genocide that they are about may disappear from not only history books, but collective memory (p. 191).

It is, however, precisely because the empirical material in the book is so compelling that the theoretical work in the book was so frustrating to me as a reader, and may be so to other readers, as well. Though it engages with several issues on which there is an extensive interdisciplinary literature, including sexual violence as a component of genocide, women victims’ unwillingness to discuss sexual violence explicitly, forced migration as a gendered phenomenon, the gendered challenges of post-conflict reconstruction, babies born in and killed by war(s), and even the meanings of gender in genocide, neither these literatures nor their theoretical contributions are really addressed in the book at all. The impact is more than a question of citation – at times, the book’s discussions of gender-differentiated impacts and gender-based survival tactics is relatively unsophisticated in its lack of engagement with others’ research, both about Iraqi Kurdistan specifically and more generally. The thin nature of some of the theoretical analysis is most obvious in the book’s conclusion, where the author attempts to critically engage media representations and historical narratives of Anfal as well as current policymakers, where there is very little that is new or innovative, despite the potential of the empirical material to be leveraged to contribute to knowledge in several fields.

After the book’s conclusion, though, the strength that characterises the narrative part of the book returns, in the author’s afterword and personal reflections on the writing of the book – a must-read, even if nothing else in the book were. The chapter deals with the challenges for the researcher of researching terrible tragedy– an issue that is often swept under the rug in academia – with both refreshing honesty and the necessary complexity. In addition to addressing the emotional toll that doing this sort of research takes, this section considers the obligation a researcher feels to make a difference with politically important information that she has collected, as well as difficulties positioning herself vis-à-vis the ‘subjects’ of her research. These are issues we are all too often plagued by, but refuse to acknowledge as researchers whose subject matter is often graphic, tragic, intense, and sometimes unimaginable human suffering, and that the author of Gendered Experiences of Genocide correctly sees as intrinsically related to doing this sort of research.

Overall, Gendered Experiences of Genocide is an impressive book – the level of detail it contains about women’s experiences of Anfal is unmatched, its writing style is cogent and energetic, and its contention that this is a genocide that slips past individual and collective memories when it ought not, is potent. I hope that scholars take this impressive empirical material and match it with the strong insights of gender analysis in international relations, international law, sociology, and anthropology to help readers learn more both about Anfal and about gender and mass exterminations. Despite its theoretical shortcomings, it should be widely read by specialists and non-specialists alike.

Gendered Experiences of Genocide: Anfal Survivors in Kurdistan-Iraq is published by Ashgate.