Gender, Sport and Development in Africa:
Cross-cultural Perspectives on Patterns of Representations and Marginalization 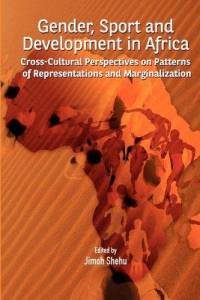 It has been over a decade since the publication of a significant text on sport, women, and the politics of cultural difference and identity. This book makes a timely contribution to debates about sport, women, and cultural diversity, bringing the voices of both scholars and sportspeople often excluded from accounts of gender and global sport development, to the fore. The book sets out to illustrate ‘the gender, sport and development problematic in the context of Africa’ (p. x). In so doing, the ten chapters variously seek to further an understanding of African sport and gender inequities at the same time as considering the potential in sport for challenging unequal power relations.

The first four chapters, and Chapters 6 and 7, demonstrate that despite feminist action to involve African women in sport, the effect of dominant ideologies about female inferiority in sport and culture serve to reinforce the exclusion, marginalisation, and denigration of women. In Chapter 1, Anusa Daimon details the hostility and violence manifest in relationships between rival soccer fans, and between men and women in soccer cultures in Zimbabwe. Soccer stadia in Zimbabwe are arenas for the legitimate display of violent masculinity directed against women. Women are commonly the victims of physical sexual harassment and verbal annihilation if they dare to attend matches and sit in areas occupied by the most aggressive males. Central to the curse of juju (magic for success) in African soccer is the belief that women are evil, and the source of bad luck. As soccer and juju cultures collide, women face discrimination, threats of violence, and exclusion from watching and playing the game.

In Chapter 2, Molly Manyonganise explains that the prevailing cultural ideals and practices privileging female passivity, emotional control, and domesticity, and shackling participation in sport to an assumed potential loss of virginity – a source of disgrace and humiliation – underpin the exclusionary and regressive character of women’s participation in sport in Zimbabwe. Traditional readings of womanhood tend to focus on interpretations of the Bible; thus, Christianity legitimates the home and church as women’s worlds. Girls do play cultural games, but at an early age, the division of labour means that boys play competitive sports, and girls work in the home, thus restricting female involvement in sport.

The focus of the discussion in Chapter 3 is the role of language in the sexualisation and marginalisation of sports women and women’s sports in Malawi. In a close reading of language, Jessie Kabwila Kapasula examines the way that indigenous African and colonial versions of patriarchy are expressed in the contexts of soccer and netball. In the local language, the terms for playing, marking, tackling, kicking, and scoring also mean hit, sexual coupling, penetration, ejaculation, and violence against women and effeminate men. Sporting narratives, orally transmitted or in the printed word, serve to sexualise sports performance, and mark out gender-appropriate sports.

Aretha Oluwakemi Asakitikpi’s analysis (Chapter 4) also draws on a study of media representations of male and female sports, this time in Nigerian newspapers. Analysing photographs, headlines, and texts reveals that sportsmen are framed by positive and disproportionate references to professionalism, skill, and achievement regardless of success or failure, whereas as sportswomen are not afforded praise for success and, indeed, are publicly and severely castigated for their failures. The unequal and biased media representation of male and female sports in Nigeria favours the development and commercial potential of male sports and male athletes.

Senayon Olaoluwa and Adewole Adejayan (Chapter 6) focus on the formation and expression of masculinity in Nigerian soccer fans. Football fandom in Nigeria has been built by the new-media culture of ‘Nollywood’ (the Nigerian video feature-film industry) and the rise of home video and television. Nigerian football fandom is central to the construction of masculinity framed by ethnic affiliation, but also trans-ethnic solidarity which is facilitated by the common acceptance of male superiority across ethnic groups. The christening of French footballer Thierry Henry as Igwe (King or Chief) in Nigeria and Atcheya (Leader) in Malawi illustrates a shared sense of masculinity across African nations. But, the potential for fandom to unite ethnic groups and nationalities bolsters the superiority of sportsmen over sportswomen, and reinforces the inferiority of African women’s sports and sportswomen.

In Chapter 7, Ramola Ramtohul maps out the development and organisation of sports for women and men in Mauritius. Participation rates for women in the country are low, and women are significantly under-represented in organisational structures of sport. Traditional historical ideals about gender roles are at play in the exclusion of Mauritian girls and women from sport. This serves to devalue the potential contribution that women might make to the development of sport in the country, and denies them the opportunities to experience positive gains in personal health and well-being from sport.

It is in Chapters 5, 8, 9, and 10 that the discussions shift to consider more fully the possibility that sports may provide sites for female empowerment and gender equity in Africa. In Chapter 5, Mari Haugaa Engh explores the intersections of gender and sexuality in South African female soccer, arguing that there is evidence of improved facilities and resources for elite players, yet large numbers of women’s teams are afforded woeful levels of support. Examples of the progressive development in women’s soccer are complicated by the indelible mark of heterosexual femininity. Female players must negotiate their identities according to dominant ideas about female physicality. Homophobic attitudes within the game and narrow definitions of femininity make it difficult for female players to experience their bodies in a way that is free from the gaze of heteronormativity.

In Chapter 8, Sharon Groenmeyer focuses on three female soccer players who have pursued long-term careers in South Africa. The story of each player provides an example of success in legislation towards gender equity and the empowerment of women in South African society, and the progression towards female inclusion in soccer. Female South African soccer players can act as a catalyst for challenging stereotypical beliefs about women in sport, playing, as they do, with the skill, strength, speed, and pride to quieten some of the detractors. But challenges remain for women at both grassroots and elite levels in relation to resources, homophobic and heteronormative attitudes, lack of player payment, and the inability of female athletes and teams to attract sponsorship and government support.

Chapter 9, by Lucy Mills, brings into sharp focus the transformative potential of sponsorship in South African women’s soccer. For her, long-term commercial support at grassroots and elite level is central to the development and sustainability of the game. There is a possibility of attracting sponsorship to the women’s game that can help to construct a ‘market niche’ for female football through corporate investment and media-marketing to provide financial and material resources and raise awareness and visibility of teams and players (p. 128). Sponsoring women’s sport can be framed as corporate social responsibility; increasingly important to the brand image of large corporations.
In Chapter 10, Jimoh Shehu brings a critical eye to the 2010 FIFA World Cup promise for 20 Football for Hope Centres in disadvantaged African communities. The chapter illustrates that the ‘20 Centres for 2010’ project embraced the ideology of mega-event ‘legacy’ in relation to the claimed benefits of community involvement, participation, and ownership. However, the project remains rooted to a model of social change that reinforces inequalities of gender, class, age, and in the use of public space. Many of the authors in this edited collection position their writing in line with dominant, western feminist thinking and literature on sport which is, in the main, founded on the cultural history of sport in either the UK or the USA and, with a few exceptions, is dominated by a focus on the struggles and rights of white women and the potential for liberation made possible within western democratic political, economic, and sociocultural systems.
I think that there was scope here to comment on the contribution of this African intellectual work to a broader feminist sociology of sport, and to signal where western feminist thought is useful, and where it is limited in understanding women, sport, and Africa. There is a silence about sport for disabled women. And the one disappointing aspect of the book is that the collection is largely, and narrowly, focused on soccer/football. Still, there was a real sense that there is more to come from these scholars, who can contribute to knowledge about the complexities of gender and cultural diversity in sport, and to practical developments towards gender equity in African women’s sport, and wider spheres of African life. The collection will be of use to a wide audience, including development practitioners, policymakers, activists, and scholars from undergraduate students to professors working in the sociology of sport and in women’s studies, as well as in other specialised fields, such as development studies, ethnicity studies, and gender and sexuality studies.

Gender, Sport and Development in Africa: Cross-cultural Perspectives on Patterns of Representations and Marginalization is published by CODESRIA.