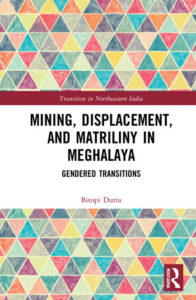 In Mining, Displacement, and Matriliny in Meghalaya: Gendered Transitions, Bitopi Dutta presents an original work on gendering Development-Induced Displacement (DID). The book is the result of her doctoral research conducted on the matrilineal societies in Meghalaya, a federal state in India’s north-eastern region. Apart from the introduction and conclusion, the book is divided into seven chapters. The first chapter presents a brief literature review on mining-induced displacement and gender and mining. The dominant schools of thought in DID either look at development as a given and views displacement as an inevitable outcome of it and presents a ‘resettlement’ perspective, or the very idea of development is critiqued where displacement is presented as a ‘development crisis’. The author argues that both these perspectives lack an in-depth gendered analysis and emphasises the importance of DID as a discourse as it is highly policy oriented.

The book is in line with the contemporary efforts on decolonising methods of doing research. The author dedicates a chapter on its methodological considerations (Chapter 2: ‘Reinventing Narratives of Displacement: Methodological Considerations’) where she justifies using life-history narratives of indigenous women as the main subjects of enquiry which also informs the analysis of the study. She argues that such centrality to people’s narratives, especially that of women, can subvert the top-down approach of doing research. It converts the grassroots from being mere objects of study to active subjects, thereby giving agency to marginalised voices.

The third chapter presents the context of the field site, that is the socio-political history of Meghalaya, its people, and society, and an introduction to mining in the state. The next four chapters (Chapters 4–7) deal with core ethnographic data that develop the main argument of the book. The author alleges that the advent of mining (development activity) in Meghalaya had radically restructured the gender relationships in its indigenous tribal societies, which also happens to be one of the few surviving matrilineal societies of the world.

The region in a very short period of the mining economy boom (30–40 years) brought massive transitions from traditional modes of living to increased urbanisation which manifests itself into changes in different aspects of the Jaintia and Khasis society of Meghalaya. First, such a transformation in mode of living changes values, norms on gender, and perceptions around matriliny which are investigated in the fourth chapter, Gender, Mining, and Matriliny in the Jaintia Hills. The author links contemporary debates around replacing matriliny with patriliny which has garnered some support from both men and women in the state, to the impacts of mining and its introduction to patriarchal control and exploitation.

Second, the gendered changes are experienced in the context of labour, leisure, and mobility (Chapter 5: ‘“Growing Up in a Mining Area”: Gendering Labour, Leisure, and Mobility’), intimacies and violence (Chapter 6: ‘Intimacies and Violence in the Mines’), and love, marriage, divorce, and reproductive health (Chapter 7: ‘Gendering Love, Marriage, and Reproductive Health: The Question of Continuity and Change’). Through the life narratives, the author captures the totality of the life cycle of three generations of women, old, middle age and young adult, and elaborated each of the above-mentioned aspects and the changes witnessed. Thus, the book accurately

maps the gendered socio-economic, cultural, and political transitions that women in this matrilineal society have witnessed across generations and how their experiences of changing ideas (on various aspects) reveal the changing content of their status and worldview throughout their lives in a broader sense. (p. 87)

As part of the Transitions in Northeast India Series of Routledge, the book captures gendered transition, a process of change that is generally overlooked by the dominant discourses of conflict, identity politics, and development in the literature on the region. She expands DID from its usual meaning of physically displaced or relocated, to social and cultural displacement experienced by small indigenous communities located at peripheral margins of mainstream society. Apart from a gendered analysis, the book also takes into account consideration of class (rich versus poor), age (older, middle aged and young adult women), and ethnicity (outsider versus insider, indigenous versus non-indigenous).

The main strength of the book is the writing style which is not only easy to understand by a generalist audience but also is able to hold the attention of the reader. The use of life narratives personalises development and its impacts which in general terms has always been a macro process of change. She shows how the everyday lives of people on the ground have changed completely within a short span of time, altering gendered relations in Meghalaya. However, the general methodological critique for narrative research as being less valid and reliable due to lack of a well-defined approach to data analysis is applicable for this book too, as narrative forms the main subject of enquiry.

Nonetheless, the book presents a convincing and logical flow of argument well substantiated with relevant references, making it a valuable contribution to development literature, particularly in the region. By elaborating more on the data collection and analysis process, the author could make the study more open to cross-examination. The book is able to contribute meaningfully to current debates around gendered transition in fast-changing societies, especially in indigenous societies. The book will be helpful for development scholars and practitioners, especially those who contribute to policy making in terms of development and development-induced displacement, and gender-related themes.