Journeys Towards Gender Equality in Islam 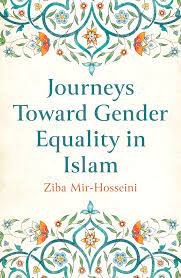 Penning a discourse about religion and gender has historically been an immense undertaking, which many a time transforms into a predicament especially when one broaches a fairly modern nomenclature of gender equality within the same milieu of work. Coupled with the global climate as far as religion – more specifically Islam – is concerned for the past two or so decades, such conversations are bound to garner poignant as well as vitriolic judgements, depending on to which side of the fence one belongs.

Feminist anthropologist and activist Ziba Mir-Hosseini’s aptly titled book Journeys Towards Gender Equality in Islam is an eloquently articulated dialogue that examines different perceptions and points of view about the patriarchal interpretation of the Sacred text through a dissociation of the divine and ethical – Shari’a’s ‘remodification and reconstruction’ (p. 6) into Fiqh – to legitimise a hegemonic methodology and implementation of Islamic jurisprudence across the Muslim world.

Shifting away from merely approaching Islamic law, gender, and equality through a historic and pre-Islamic lens, Mir-Hosseini contextualises an egalitarian conversation through compelling and diverging perspectives on ‘contemporary Islamic tradition’ (p. 12) in the backdrop of sweeping Islamisation, especially across the Muslim world, delineated by post-revolution Iran and the genesis of radicalisation in Pakistan, the revolution in Sudan, and beyond.

Unpacking the much-debated topics of Muslim family laws, the rights and status of women, and Islamic feminism across academia, as well as socio-political and legal spheres, Mir-Hosseini’s narration is stylistically simple, honest, and thought-provoking; and filled with anecdotes and relevant accounts that give texture, flavour, and sensibility to the entire discussion. From the point of view of language and diction, the book defies the customary pedantry one might come across, given the nature and scope of the content. Non-English text is italicised and without the usual diacritical marks; and as the author herself explains, ‘familiar English forms of Arabic and Persian’ terms are used. This removes even the slightest bit of verbosity or heaviness textually that might otherwise distract the reader.

The book is Mir-Hosseini’s journey in conversation with academics, scholars, and reform thinkers to propose an approach to the Sacred text, Shari’a, Fiqh, and Islam as a lived experience through the application of gender as an analytical tool; a significant attempt at reconciling or rather aligning human rights and particularly women’s rights with Islamic legal traditions, especially the Muslim family laws. The author’s appeal is to associate modern notions of justice and equality; values that are in fact enshrined in the divine, yet not found across patriarchal interpretations of Islam.

The reader embarks on a journey that delves deep into the mysticism of the divine and Shari’a, and the worldly rulings that are based on the former two. What is more interesting is how the author presents diverging reformist outlooks relating to Shari’a and Fiqh. For Mir-Hosseini, unlike other thinkers, especially one featured in the book – Abdullahi An-Na’im, she suggests the importance of discerning the distinction between the two and rejects their interchangeability (p. 74) which An-Na’im maintains. She explains not just to An-Na’im but also her fervent readers: ‘I do not see Shari‘a as a set of rules and laws but as a transcendental ideal whose essence is justice, and I say that this justice must be reflected in laws that are made in its name. As an activist, a believer, and an individual wishing to communicate all of this, I begin by claiming this justice, so I tell them that Shari‘a is just; it has to be just because God is just; in this way I can be critical of fiqh-based family laws and frame the demand for change from within. But if I conflate Shari‘a with fiqh, then I have no argument, no room for contestation’ (p. 72).

She further rationalises: ‘I see the problem in this way: as soon as we voice our critique of fiqh-based laws, we are silenced by a Qur’anic verse, by a Hadith, by a fiqh ruling. Therefore we – women’s rights activists and Muslim feminists like myself – see the distinction between Shari‘a and fiqh as a necessary precondition for any conversation’ (p. 72).

The language, syntax, and content of the book come together to determine how the message is presented, documented, and consequently relayed to readers and wider audiences. Language is marked with subjectivity that finds its roots in hegemonic patriarchy, history, cultural norms, and socio-political construct.

Accompanying Mir-Hosseini in her journey, one can conclude that her efforts are to highlight that divinity of the Sacred text cannot be fully encapsulated in a man-made language – with all its limitations, restrictions, biases, and history. Rulings and interpretations need to be revisited as well as contextualised.

In a discussion with eminent theologian Amina Wadud, who has written extensively on the role of women in Islam, Mir-Hosseini highlights the dangers of this subjectivity and the limitations it presents. By applying gender as a tool of analysis, one could discern the patriarchal hegemony occurring in language: ‘Men speak from the position of privilege all the time’ (p. 72).

Wadud further says: ‘Any time the divine is subjected to human language, there is going to be a
limitation on divine expression, in other words, it will be constrained by the language … ’ (p. 98).

Tilting the conversation towards Wadud’s lived experiences and her journey as a theologian, the book unwraps historic moments – first in South Africa then in New York, USA, where she became the first woman to give a pre-Khutbah (sermon) before Jumma prayers as well as leading Jumma prayers, respectively. Both occasions were held years apart. What is interesting to note here is the juxtaposition of experiences. On the one hand is Wadud’s internal inspection (p. 106) highlighted by her constant struggles with ‘nafs al-lawamah’ (the self-accusing nafs) – one could perhaps term this as an imposter syndrome deeply rooted in spirituality and love; and on the other, external experiences, namely the series of events that ensued when she led Jumma prayers in New York – becoming the first woman to perform this traditionally male-led ritual.

The conversation between Mir-Hosseini and Wadud deconstructs the patriarchal paradigms of the ritual space, examining the role and relationship of imams (prayer leaders) with divinity and the dependent conditionality of male hegemony as far as performing ritualistic services are concerned. Deeply rooted in spirituality, the conversation further exposes the ‘common rationalization used to justify the separations of the sexes within the ritual space’, with Wadud critiquing ‘Yes, the same problematic notion that sexuality and the spirit cannot co-exist, that sexuality somehow transcends the spirit’ (p. 111).

Citing An-Na’im and Wadud as two examples from the many cohesively embedded throughout the book, one is truly fascinated with the intellectual, scholastic, and deeply moving personal journeys of all the thinkers along with that of the author. It offers readers deeper insight into what Mir-Hosseini, along with her 20th-century Islamic feminists, envision as an inclusive way forward.

Journeys Towards Gender Equality in Islam opens up several critical points of discussion and challenges from engaging with language with all its limitations, interpretations that are singularly patriarchal in nature, to the enlightening trajectory of lived experiences. This enables Mir-Hosseini to assert the importance of organically integrating the notions of women’s rights and Islamic feminism within the context and framework of the divine word, Shari’a as well as socio-political Islam, thereby building the case of empowerment and gender equality – that is intersectional, real, and all-encompassing.