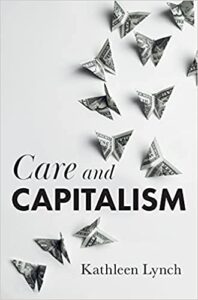 Amongst the most crucial issues in current debates on gender equality is that of labour – paid, underpaid, and unpaid. Kathleen Lynch’s book, Care and Capitalism, raises the polemics of care and caring a notch above, re-examines fundamental concepts, and takes forward the inherent rationale and reasoning by incorporating and yet extending the discussion beyond the fact of its constraint on female labour force participation and the devisibilisation of women’s contribution to economic and societal structures. The vision of the book presents a significant contribution, not to be perceived as a mere addition but in fact as substantially widening and deepening the debate.

The fundamental objective is to create counter-narratives to the analytical, normative, and ideological framework of neo-liberalism, one that needs to be demystified in all its avatars, especially in the context of care, and of the reality that the paid economy cannot exist without an unpaid economy supporting it. The ‘injustices and carelessness of neo-liberalism’ and its ‘harms’ (p. viii) as well as challenges are sought to be identified. The question, however, is that is this merely ‘carelessness’ or the raison d’être of its very existence.

Care is defined beyond care, and the exploitative logic of homo economicus contradicting that of being homo curans (p. 37) is explained admirably, resulting in a nuanced delineation of the forms and methods by which care and domestic labour are denigrated, combined with, and leading to devaluation and abjection that reinforce the secondary status of women via but not only through the perpetuation of the gendered division of labour which – and this needs to be asserted repeatedly – consists of paid, underpaid, unpaid work, and all that lies between, and within recognised, unrecognised, and, in fact, increasingly derecognised labour.

The functioning of the complex and complicated gendered work continuum at several interconnected levels is perceived in the context of the presence or absence of enabling conditions. Linked to this are the exchange-value and use-value inherent in all forms of work and labour, the macro-patriarchal state especially under capitalism benefiting from the use-value of unpaid and care work, all of which have a hidden exchange-value. So long as this remains covert, the resolution of the paid–unpaid burden is constrained to ‘microeconomic’ processes and the household level, thereby creating another form of devisibilised appropriation of both relative surplus and absolute surplus. The integration of the two in myriad and mystified ways and methods disguises the necessity of a macroeconomic resolution through enhanced gendered allocations and subsidies, and additionally and crucially revenue-raising strategies that must of necessity be consciously redesigned to reduce the total burden of care and unpaid work. The macroeconomic framework requires strengthening: there are numerous and expanding illustrations of the increasing appropriation of especially women’s labour through drastic decline in state support to public provisioning. Few researchers, however, focus on the macroeconomic fundamentals, limiting the resolution of this ‘problem’ to micro inter-household modifications and solutions centring on ‘adjustment’ within families.

The analysis of the concept of time under capitalism will be of special interest to those researching unpaid and underpaid work. Work to be done for a specified period defined formally as labour-day which itself is increasing; part-time work; work that has no timings and spreads over, within, and outside time; work to be done on time; to be done at specific times – many and multiple variations, with continuous integrations characterised by fluidity, agglomeration, aggregation, multiplicity, and synchroneity across all categories of labour, employment, work, and livelihood even if perceived within a strictly market framework – are all covered in this book. Consequently, there is the issue of whether time is a commodity, and whether and how it can be valued as an economic resource and a material asset that is commodifiable and hence measurable, quantifiable, calculable.

Another important aspect examined is that of violence. Violence is an integral part of capitalism, created and expedited by the state and its business interests and corporations via institutional and increasingly technological mechanisms. Violence is not only normalised and actualised, but also legitimised and often internalised both in the public and private domains. As the author asserts, ‘Having a monopoly on the use of physical violence is a defining feature of nation states’ (p. 183). Additionally emphasised and also deplored is that while multiple forms of violence perpetrated have been researched and analysed, the interlinkages to care and caring have been peripheralised in academic discourse as well as policymaking.

Of particular interest is the rather inspiring identification of several forms of challenges to neo-liberalism in several countries cutting across sectors and sub-sectors, both formal and informal. The forms of resistance and also solidarity include those, of course, of trade unions, feminist movements, struggles against racism, etc., and additionally of affective relational resistances and even refusals.

Kathleen Lynch’s book is based on strong and quite impeccable theorisation and conceptualisation, and contains dynamic intersectionality by consistently incorporating considerations of class, race, religion, age, and ethnicity. The result is a serious and enriching reconsideration of the concepts of ‘care’ and ‘caring’, as well as the methodological designs and structures currently in use, impacting thereby a re-thinking and re-formulation of policy designs and practices that are ostensibly aimed at protecting and promoting gender equality. An attentive reading of this book will increase sophistication of methodology and enhance its applicability and relevance in order to capture the ‘harms’ and injustice being perpetrated by the neo-liberal paradigm where especially women have to bear the burden of increasing financial austerity and the continuous reductionist character of an already weak welfare state.