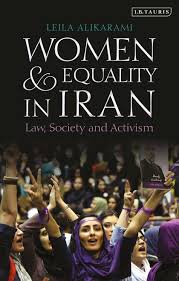 In Women & Equality in Iran, Leila Alikarami explores contemporary Iranian women’s tireless efforts towards advancing their legal rights. After providing a history of Iranian women’s activism over the last century, Leila Alikarami carefully examines the debates on women’s rights as they have unfolded between activists, legislators, and the executive branch in the post-revolutionary Iranian state. In engaging both feminist and socio-legal theories, Leila Alikarami questions the extent to which bottom-up activism can secure official support and meaningful change towards the advancement of women’s rights. Iran’s failure to accede to the Convention on the Elimination of All Forms of Discrimination Against Women (CEDAW) is a central concern in this book, with Leila Alikarami suggesting that it signifies the Iranian state’s resistance to the idea of gender equality.

Women & Equality in Iran weaves a chronological timeline of Iran’s encounter with the CEDAW into an analysis of the post-revolutionary state’s legal system and civil and criminal codes. By tracing the history of Iran’s participation in international women’s rights conferences, Leila Alikarami uncovers the reason behind the Islamic Republic’s reluctance to accede to the CEDAW, with or without reservations. This is the ruling Shi’ite clergy’s claim that international standards of gender equality are contradictory to Islamic principles of gender equality Many contemporary academics, however, find that the resistance of the Islamic Republic of Iran and other such states to international conventions such as CEDAW is a consequence of conflicts with the interests of the male political elite rather than conflicts with the tenets of Islam. Leila Alikarami supports this view, and while she is a proponent of Iran’s accession to the CEDAW, she also endorses a path towards gender equality in Iran through the use of traditional tools and legal theories such as sharia (Islamic principles) and feqh (Islamic jurisprudence) (p. 32).

Leila Alikarami deftly outlines the political and legal system in the post-revolutionary Iranian state, illustrating the process through which bills must pass before they are signed into law. Even if parliament votes to pass a bill such as CEDAW, it is not signed into law without the Guardian Council’s approval. If parliament and the Guardian Council reach an impasse, the Expediency Council is called upon to resolve it. In practice, the CEDAW bill has been sitting with the Expediency Council since 2003. Leila Alikarami infers from this that it is the current regime and not Islam that is restricting women’s rights, and that a more ‘open-minded interpretation of sharia can eliminate discriminatory laws and practices’ (p. 74). She then provides a detailed account of the deliberation that took place when activists pushed for the CEDAW to pass in the legislature beginning in 1995. In spite of opposition from ruling clerics who rejected it for its imposition of Western values, the CEDAW was passed by the majority of the parliament, but soon rejected by the Guardian Council, on grounds that it violates sharia. Leila Alikarami’s use of primary sources – including transcripts from speeches by activists and members of parliament in favour of and against CEDAW – strengthens her argument that the Islamic Republic’s political and legal system, and not Islam, is an obstacle to passing this anti-discriminatory legislation.

Through a close examination of the Iranian civil and criminal codes, Leila Alikarami lays bare the laws that discriminate against women. In Chapters 4 and 5, she traces the incremental changes that have occurred when women have challenged these laws, and forced jurists to engage in a conversation about their demands. Such a process, I would argue, is something that may lead to new interpretations of sharia that eliminate discriminatory laws.

As a practising attorney and women’s rights activist in Iran, Leila Alikarami was active in the One Million Signatures Campaign, and she devotes the final section of the book to this. The campaign, established in 2006, targeted gender discriminatory laws in general, and involved women from a variety of socioeconomic backgrounds. The aim was to collect one million signatures and then draft a bill for the legislature. These goals were not achieved. Instead, the campaign succeeded both in raising awareness of women’s rights issues, and working with officials to help gain visibility. Conservative campaign members met with the Supreme Leader Ayatollah Khamenei, resulting in a change to discriminatory inheritance laws (p. 170). While the campaign eventually fell apart because the state saw it as a national security threat, Leila Alikarami argues that the visibility it gave to the women’s rights movement continues, and women are increasingly vocal, whether or not their demands are met. In this discussion of the One Million Signatures Campaign, Leila Alikarami aligns her argument with that of Islamic feminists, who assert that ‘most successful are those who locate political action in the context of Islam’ (p. 181).

Overall, Leila Alikarami successfully grounds her feminist analysis in the specific context of Iran. While not losing site of international standards for human and women’s rights, she argues for a localised approach towards achieving gender equality, substantiating her argument with ample evidence from interviews and primary sources.

In terms of style, with the exception of a few instances where the overuse of block quotations distracts from the flow of the work, Leila Alikarami’s language and tone makes Women & Equality in Iran accessible to all audiences. That said, this book will be particularly useful for gender and development scholars, as well as international activists or policymakers who have a level of familiarity with gender equality issues in Muslim-majority societies.

Published at a time of heightened political tension within Iran, and with the country facing increased levels of international isolation, Leila Alikarami’s work is significant, offering as it does a pragmatic strategy for achieving greater gender equality for Iranian women.