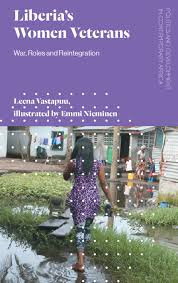 Leena Vastapuu’s recent book Liberia’s Women’s Veterans: War, Roles and Reintegration provides a comprehensive and complex account of the lives of 133 female ex-combatants of Liberia’s civil wars, describing their experiences during these wars and their reintegration back into civilian
life, as well as their present-day situation, aspirations, and dreams for the future.

Based on several months of fieldwork in very challenging conditions, the book presents a wealth of empirical data about women’s lives across time. Following one of the central precepts of feminist research, Leena Vastapuu built up a strong rapport with a large number of women. This has helped to generate some very personal accounts and means that the book does not focus so much on the more commonly discussed issues of women’s roles in armed groups, or the support they received during disarmament, demobilisation, and reintegration (DDR), but rather, and more interestingly, on women’s everyday lived experiences throughout the different phases of the conflict, and their post-conflict lives.

The book presents an impressively nuanced picture of the great challenges that these women have faced and continue to face, including the drug addiction that often connects their conflict and post-conflict lives, and the resort to sex work as a means to survive, not to mention post-conflict disasters such as Ebola and forced evictions. In light of these adversities, it is inspiring to read how most of the women who participated in Leena Vastapuu’s research continue to have hopes for the future that, echoing the hopes of women in many conflict-affected areas around the world, often centre on the better lives they desire for their children. The crucial role that social networks (described in the book as ‘wealth in people’), based on family or relationships between former comrades, play in the chances of achieving these better lives becomes apparent as the book progresses. Such important insights suggest possible areas for post-conflict reconstruction policies to focus on.

One of the main contributions of the book to the literature on gender and peace lies in the account it gives of Leena Vastapuu’s research methodology. Leena Vastapuu used visual research methods in order to give her research participants the tools to describe their own experiences, enabling them to centre those aspects of their lives that they found most important. This approach divests the researcher of the power to decide where the emphases should lie, and helps avoid the retraumatisation of research participants. Moreover, the visual method allowed Leena Vastapuu (and us as readers) an insight into aspects and areas of the women’s lives that would be hard or unsafe to access, otherwise. Visual and other participatory methods have long proven their worth in research on sensitive topics, or with marginalised populations. Apart from handing more power to the research participants, the method also helps to disrupt the common preference for and dominance of written knowledge in academia, and corresponds with Leena Vastapuu’s postcolonial, feminist approach.

Some aspects of this approach are puzzling, however; in particular, her choice not to directly include the photographs taken by the women, having them turned into illustrations by a Western illustrator, instead. Although the ethical challenges of including photographs containing identifiable individuals are clear, among the thousands of images taken by the women, there must have been some that did not pose any risks. Furthermore, Leena Vastapuu explains that the participants’ photos would mean very little to the Western viewer. This seems to contradict her call for Western audiences to examine and take responsibility for their own privileges when viewing or listening to the speech or visualisations of non-Westerners (p. 41). When making the important ethical and methodological choice to have the ‘subaltern’ visualise their own worlds, it seems an odd decision to have these visualisations ‘translated’ for Western readers by a Western illustrator. This appears to take away some of the agency that was so rightly afforded to the research participants, which is a shame in such an otherwise ethically informed endeavour.

A novel element of the book is its specific take on postcolonial feminism. Leena Vastapuu has developed an approach she calls ‘curious contrapuntalism’, based on the work of Cynthia Enloe and Edward Said. This involves the process of ‘contrasting various sources of information while extending the senses in multiple directions simultaneously’ (p. 172), both by complementing verbal and written knowledge with visual knowledge, and contrasting women’s stories with official documents and external views. Although, to a certain extent, the book does give an impression of the frequent mismatch between the international community’s and civil society’s intentions and perspectives and the reality of women’s lives, it does not offer much detail on the specific policies in place or the more general international academic and policy context in which these policies are implemented. There is surprisingly little reference to some of the key academic literature on gender and conflict, including debates on victim–perpetrator dichotomies, DDR policies, or post-conflict reconciliation. There are also very few references to interviews with personnel involved in Liberia’s DDR programmes (which could have provided more nuanced views about the implementation of these programmes), nor on the existence of other types of support mechanism for (female) ex-combatants or people otherwise affected by the conflict.

Although this somewhat weakens Leena Vastapuu’s claims regarding the importance of her curiously contrapuntal method for analysing Liberia’s DDR programmes, it does not negate the undeniable value of this book. Its real strength lies not in its triangulation of different perspectives on formal programmes or policies, but in its rich and diverse empirical data, through which Liberia’s women veterans convey their experiences in their own words and images. This makes this book a must-read not only for those interested in researching gender and conflict, but especially for those policymakers in this field who have a real desire for promoting positive change in the lives of women affected by conflict.