Gender and Work in Global Value Chains: Capturing the Gains? 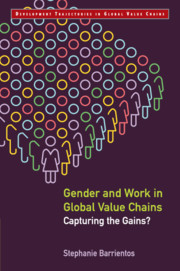 Stephanie Barrientos’ new book is the impressive result of a career in research and advocacy on the ways in which women’s lives are affected by structural changes in local and global economies. Gender and Work in Global Value Chains provides a wealth of information related to women’s work in global production and retail, and despite its detail and complexity is highly accessible, as is the case with all of Stephanie Barrientos’ work. In addition, Stephanie Barrientos provides us with an excellent model for the kind of research that needs to be done if we are to truly understand the relationship between the economic success of an industry and the social well-being and empowerment of the people who work in it. Too often, economists miss the most important parts of the world of work: in this book, Stephanie Barrientos demonstrates the need to dig into on-the-ground case studies as well as industry statistics and macro-level data. This is in order to identify the conditions that determine whether women do or do not benefit from the work connected to global production and retail.

She also emphasises the value of collaboration across disciplines and between research organisations and corporate and state-level actors. This collaboration is necessary both for carrying out the research and for acting on lessons learned on challenges, failures, and successes.

The book is one in a series called ‘Development Trajectories in Global Value Chains’. This interdisciplinary series from Cambridge University Press addresses key questions about the global value chain (sometimes referred to as global production networks) framework, and the extensive literature it has generated. Originally developed from the field of Sociology in the mid-1990s, these frameworks explore connections and power relations between people, firms, and governments as a good (that is to say, product) is invented, engineered, produced, and transported; finally ending up on the shelves of big and small retailers – perhaps far away from where it was originally designed or produced. This framework helps to uncover mechanisms that guide the generation of jobs, working conditions, consumer choice, and importantly, the distribution of pprofits and wages across the many firms and workers that are part of most global value chains.

The value that Stephanie Barrientos adds to this literature is the articulation of what she calls the G(r)PN – gendered global (re) production networks. This theory emphasises how gender relations affect the formation of the chains and networks in the first place. In addition, the theory allows for exploration of the impact of the chain on women’s access to employment, employment outcomes, and empowerment. Stephanie Barrientos was one of the first scholars to integrate a gender lens into global value chain analysis. In this book she presents multiple case studies that explore how the domestic and global commercialisation of goods made by women at home blurs lines of paid and unpaid work. She is particularly interested in how community, state, and commercial contestations and innovations can lead to economic and social upgrading or downgrading, which both reflect and affect employment outcomes for women and men workers. Economic upgrading results when a company is able to improve the value-added of their goods, which usually translates to higher profits; this can come from selling higher-quality goods and/or accessing new technology.

A key question that scholars of global value chains are asking is under what conditions can this translate to better wages, less inequity, more empowerment for the workers connected to those firms. This is called social upgrading. Because of the work of Stephanie Barrientos and others, we know that there is no natural connection between economic upgrading and social upgrading, and that it could actually lead to multiple outcomes, including workers being made worse off, which would be downgrading.
The book presents a broad overview of both the historic and the theoretical framework, so as to illustrate gendered patterns of work in global production and retail. This economic history covers crucial characteristics of recent and current waves of globalisation that are relevant for understanding how the quality, quantity, and dignity of women’s work is connected to global commodity chains.

A key example is the just-in-time or no-inventory models that large corporate buyers (retailers) might use. This system pushes producers to speed up and slow down depending on demand, putting the pressures of price and time on the producers at the middle and bottom of the value chain. This can have an enormous impact on the types of contracts that workers can get, particularly in relation to permanent or temporary, formal or informal arrangements; at its worst it could foster a reliance on
trafficking or child labour – both of which prey on the particular vulnerabilities of women and the poor. Stephanie Barrientos’ gendered global production network analysis explores and exposes how gender relations are intertwined with these systems of global fragmentation and distribution.

The detailed and fascinating case studies that make up a large part of the book are framed by this historical and theoretical analysis. Ultimately, Stephanie Barrientos is interested in understanding the roles that civil society, the corporate world, and the state play in fostering environments of economic and social upgrading or downgrading, particularly as it pertains to women’s lives. The primary sets of case studies are on the apparel industry, and agri-business in fruit, flowers, and chocolate, and they cover Ghana, South Africa, Kenya, India, Bangladesh, and a multi-country case involving an initiative from Nike. Each set of case studies is crafted to facilitate comparisons and reveal striking contrasts – national histories, the role of the International Monetary Fund or the World Bank, the 2008 global financial crisis, stagnation and change in traditional gender expectations, the roles of foreign firms or US and European consumer appetite for unethical labuor/trade practices, etc. Combined, they portray riveting stories of change, disappointments, and possibilities.

Scholars, activists, policy- and lawmakers, and development professionals should pore over this book. It is packed with theory and evidence that should guide us in our own research agendas. We need to consider how gender relations and women’s lives reflect and impact the distribution of profits and quality jobs in the global economy. Stephanie Barrientos’ work shows us how to do that.