The Women’s Movement in Pakistan: Activism, Islam and Democracy 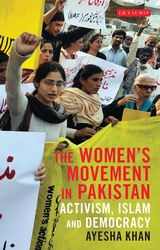 Ayesha Khan’s book is intended to educate a new generation of Pakistani women about the role Women’s Action Forum (WAF) played in combatting policies directed against Pakistani women in the 1980s and beyond. WAF, an urban-based platform for different civil society organisations, was created in 1981 in direct response to General Zia-ul-Haq’s discriminatory policies, like the Hudood Ordinance that increased women’s vulnerability to sexual violence, made it practically impossible for them to seek legal redress, and created the conditions that gave the state sanction to incarcerate innocent women. The religious justifications given for this and other such ordinances made them difficult to challenge.

Ayesha Khan uses interviews with WAF members, the WAF archives and other secondary sources to provide a detailed look at WAFs activities from 1981 to the present day. She combines an account of their strategic-writing campaigns, awareness-raising sessions and their street protests —for particular cases or against discriminatory legal injunctions—with narratives about the debates within WAF itself. Whether to use an Islamic or secular framework to fight for change or claim rights, in a context where an Islamic discourse has increasingly captured the public’s imagination, and has been used to legitimise a number of harmful injunctions, is an example of such a debate. Ayesha Khan also extends the reader’s understanding of WAF further by addressing some of the common critiques it has faced historically. These include but are not limited to its small, urban-based and largely elite membership, and its reactive politics. This rounded picture of a women’s rights platform operating in the socio-political context of General Zia’s Islamisation of Pakistan is important.

However, the book’s most valuable contribution goes beyond our understanding of WAFs role and influence in this politically-charged atmosphere, and lies in the in-depth account it presents of how this state of affairs – wherein women’s basic rights to their body and their liberty came under attack – came to be. The different chapters of the book take readers through a chronological journey that demonstrates how state actors’ politically-expedient behaviour gave religious groups increasing space to curtail the rights of religious minorities and women under the pretext of establishing an Islamic order. Ayesha Khan does an excellent job of interweaving these local negotiations over citizenship rights with other nations’ strategic interests in the region. She demonstrates how factors like the United States’ interest in combatting the Soviet forces in afghanistan resulted in their funding mujahideen; how their desire to further their regional agenda translated into supporting Pakistani military dictators at the cost of weakening Pakistani state structures; and how Saudi funding brought about a rise in religious schools that promoted an exclusionary and extremist ideology. This book demonstrates how global influences like these combined with the vested interests of Pakistani religious groups and state actors to create an increasingly hostile society for women.

Ayesha Khan provides a historically-detailed narrative that juxtaposes the interplay of local and global forces and their repercussions for Pakistani women with women’s mobilisation to resist these forces and to attain greater political, economic, and social rights. This framework informs the entire book, beginning from the birth of Pakistan. However, the story of women’s mobilisation does not end with Zia’s death in 1988 but continues to the present time, thus covering ‘firefighting’ activities and battles on a range of issues that includes the Hudood Ordinance, acid attacks, honour killings, domestic violence, sexual harassment, and increased women’s political participation. This is valuable documentation. This historical trajectory also makes a convincing case for how democracy and participatory politics, especially when they include women’s participation, are essential pre-requisites for protecting citizenship rights. Some aspects of the book, however, required greater discussion from the author. The frequent use of the term ‘modern’ with ‘social movement’, for instance, needs explaining. Furthermore, the author’s consistent use of the term ‘social movement’ to frame women’s activities in all historical periods is questionable. The definition of social movement as‘sustained collective action by women for their rights’ (p. 2) seems more suitable to describe WAF’s activities in the 1980s, when WAF was the central platform through which different women’s organisations mobilised and worked as a collective to challenge General Zia’s discriminatory policies. The term becomes analytically confusing, however, in the changed landscape of the 1990s and beyond, when there was a proliferation of NGOs working on different women’s issues through a range of approaches. Ayesha Khan identifies and describes particular moments when these organisations came together to work on specific issues via a variety of platforms (WAF was one of many by that time). But viewed from today, it may be more analytically useful and meaningful to conceptualise the activities of these more recent decades as constituting a variety of movements (for instance, the movement to repeal the Hudood Ordinance or the movement to get sexual harassment legislation passed). Doing so would also take care of a related problem of only using the term ‘women’s movement’ with reference to WAF or the organisations founded by its core members. Even though the book clearly states that its focus is on WAF and acknowledges the contributions made by other groups and alliances, equating WAF or its members’ organisations with ‘the’ women’s movement in Pakistan underlines the need for a wider prism to understand and do theoretical justice to Pakistani women’s activism, especially after the 1990s.

However, all in all, this book is an important read for anyone interested in women’s activism, social change, Islam and Pakistani politics. Suitable for academic use, its accessible style also makes it appropriate reading for a wider audience wishing to engage with these important issues.