The Logics of Gender Justice: State Action on Women’s Rights Around the World 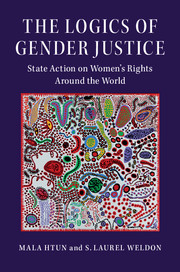 The question of why and when states take action to promote women’s rights is a question that is of interest to feminist activists and scholars alike. In The Logics of Gender Justice, Mala Htun and S. Laurel Weldon provide an invaluable and global insight into the political dynamics at play across a range of policy areas when the pressing need for gender justice leads to legislative action.

The book has several strengths. The first lies in its presentation of an admirably clear and logical framework for understanding the types of gender inequalities that exist, and the kind of policy actions needed to address them. A key contribution of the book is its suggested typology of ‘equality-promoting’ policies. ‘Status’ gender equality policies aim to promote the social and legal status of all women, for example, ensuring legal equality in the workplace, legal abortion, or policies addressing violence against women. ‘Class’-based gender equality policies seek to mitigate against class-based inequalities, and may require redistributive policies so that poor women have access to provision such as childcare or pension security. Some status and class policies will face doctrinal resistance if the proposed policy challenges deeply entrenched religious and cultural traditions, e.g. policies to address reproductive rights, or for the provision of public funding for reproductive rights.

The progress in achieving policy changes to address inequalities arising from status-or class based gender inequalities (and the extent to which reforms face doctrinal resistance) will also be affected by the political dynamics in each particular context. As the authors make clear, ‘each issue therefore involves different actors, activates different cleavages, and motivates different types of political conflicts’ (p. 16). Status issues challenge cultural expectations about the role of women: feminist movements are key here in pushing for change. Doctrinal issues might result in religious resistance, and class issues involve the politics of redistribution. This raises questions about the public versus private responsibility for social provision, requiring support from left-leaning
political parties in order for redistributive policies to get adopted.

Understanding the shared characteristics of different gender equality policy types and their attendant political dynamics allows for the formulation of a framework for understanding when and where the circumstances facilitate states to take action, and enables us, in the authors’ own words, to chart the ‘logics of gender justice’.

The second great strength of this work is the meticulous empirical work on which it is based, with the authors investigating and testing their framework in over 70 countries across four decades of equalities reform. The scope of the research is huge, covering all continents, political regimes, and policy types. Quantitative analysis is supplemented by qualitative case studies and interviews.

The authors’ analysis confirms some expectations of the ‘logics of gender justice’, notably the importance of feminist movements for achieving change for status policies and leftist parties in advocating for reform to class-based gender inequalities. Their findings reveal patterns which help account for the differential adoption of policy issues both across and within states. The research also presents some surprising findings, e.g. that the importance of women representatives in politics is weaker than would be expected and may not be as important as other drivers of equalities policies (pp. 239–240).

The authors also explain the institutional legacies of Communism and colonialism, and how these legacies shape and account for different trajectories of reform for gender justice. These lessons are transferrable to other policy agendas addressing structural injustice arising from inequalities around race or sexuality, and could also be utilised when seeking to implement gender justice reform at a sub-national level.

This book makes an important contribution to the scholarly understanding and literature on public policy, gender and politics, and human rights and, although primarily aimed at an academic audience, provides valuable insights and lessons for development practitioners, feminist campaigners, and policymakers seeking policy reform. Over the years of the book’s gestation the authors have shared their framework, methods, and findings with scholars and with activists seeking to challenge and change gendered inequalities. Their work has already opened up new agendas for research, and the findings provide a template for political action: something much needed, for as the authors point out, the fight for gender justice is a long journey. This work will help all those concerned with improving women’s rights to navigate the twisting paths of reform.