Gender Equality and Tourism: Beyond Empowerment 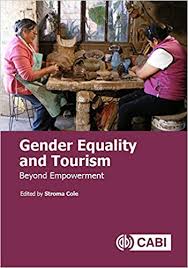 Through the tourism sector, poor women around the world have uncovered new revenue-generating opportunities. For many development agencies, that’s a victory. But does increased income automatically lead to increased agency, autonomy, and authority, or in other words, empowerment? Gender Equality and Tourism: Beyond Empowerment provides a timely and accessible examination of the extent to which work in tourism can empower women to transform unequal power relations in favour of women’s rights. Stroma Cole, the book’s editor, argues that economic empowerment is missing the point if it fails to make a lasting change in women’s agency and choices over their own lives. Quoting Srilatha Batliwala, she clearly states that the goal should not just be economic gain but the ‘transformation of the structures and institutions that reinforce and perpetuate gender discrimination and social inequality’ (p. 5) – and that this requires psychological, social, and political empowerment.

This book is a collection of academic papers originally prepared for a 2016 gender and tourism conference in Turkey. Chapters are interspersed with short personal testimonies that introduce us to women around the world whose lives have been changed through various opportunities in tourism. Most of the contributions are concise and thoughtful, with a fine balance between real-life examples and feminist theory. The book begins with a feminist discussion of empowerment by Stroma Cole that casts a sceptical eye on the ‘hijacked neoliberal conceptualisations of economic improvement’ (p. 9). Following this is a critical discussion by Lucy Ferguson on the resistance to gender mainstreaming in tourism policy. The author presses the UN World Tourism Organization to reassume the mantle of leadership in gender equality in tourism and follow through on its joint commitments with UN Women on this agenda.

Belén Martínez Caparrós’ thought-provoking chapter surveys a women-operated trekking company in Ladakh, India. Women guides in the traditionally male-dominated trekking and mountain climbing sector gained confidence in the public sphere but continued to maintain traditional roles in the domestic and political realms. The author describes how achieving financial independence was insufficient to empower Ladakhi women to challenge deeply embedded patriarchal norms, or to lessen their feeling of vulnerability to gender-based violence. Later, Hazel Tucker’s discussion of Turkish craft-makers illustrates the profound plight of women who choose to make dolls for tourist consumption in order to enable their children to escape this unsatisfying line of work. Hazel Tucker reminds us to examine our romanticised notions of women artisans that are common in the tourism and development contexts.

In contrast, Isis Arlene Díaz-Carrión’s research in the Catemaco-Montepío tourist area in Mexico uncovers how women’s entrepreneurship in ecotourism can generate social capital through financial gains and increased public recognition, which women use to defy traditional gender roles. Similarly, in Nepal, women aim to become ‘self-dependent’ through tourism entrepreneurship. These encouraging stories should reassure development practitioners that promoting tourism entrepreneurship can indeed result in small gains at the micro level.

Memorable moments occur when researchers’ expectations are upended by the realities of the women they interview. The women hosts engaged in township tourism in Cape Town felt that engaging with tourists was empowering and humanising, contrary to author Meghan Muldoon’s expectations. Heather Jeffrey discusses how interactions with tourists in Tunisia have boosted women’s self-confidence and cultural liberation.

Taken as a whole, the book successfully challenges common beliefs that women’s economic empowerment inevitably results in a greater capacity to execute agency and change inequalities in other areas of their lives. Heather Jeffrey explains that empowerment is only possible when a woman is in control of her own wage. For the women artisans in the town of Metepec, Mexico, psychological empowerment can follow economic empowerment when success is publicly recognised, such as through being awarded the title maestra (master craftswoman) or interacting with visitors in commercial spaces.

The conclusion by Stroma Cole does an excellent job of weaving together the lessons learned from each case, and examining the challenges from an intersectional perspective. What can development practitioners and policymakers take away from this engaging book?

First, as Stroma Cole says, ‘there is no direct or automatic relationship between women’s employment and empowerment, and, in any case, policy does not support it’ (p. 133). Programmes to transform gender inequalities will also need to address other areas. For example, the double burden for women of working in a job in tourism on top of their domestic and unpaid care work should no longer be ignored by development programmes and policies. Second, women’s voices are needed in policy- and decision-making at every level. Women managers in tourism companies may be more likely to implement measures that promote gender equality, as suggested by the research of Fiona Eva Bakas et al. in Portugal. Third, international organisations that play major roles as tourism thought leaders have for the large part failed in monitoring change. The second edition of the Global Report on Women in Tourism, published in 2019 by UNWTO with partners, including the World Bank, gives the international community another chance to build awareness, act on recommendations, and monitor and evaluate progress.

One gap in the book is the little amount of discussion of the role of digital and technology in improving market access for women business owners. Despite the growing reach of digital tools and platforms that connect tourism service providers with travellers as well as each other, little attention is paid to understanding how women entrepreneurs can succeed in a digitalising world, given what we know about the gendered digital divide. Another oversight is that despite the many personal stories from women in tourism that showcase drive, creativity, and entrepreneurial spirit, we are left wondering how the small successes can be scaled up to effect sector transformation. As more researchers and practitioners take up work on gender equality and tourism, we hope that greater knowledge sharing and collaboration can help us connect the dots.

But these small omissions aside, the book provides a convincing and informed argument for development agencies to rethink their approach to tourism as a development tool. Now that the components of empowerment have been so clearly articulated, much more needs to be done to work with both women and men to leverage tourism as a force to improve gender equality.