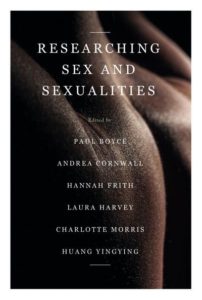 Researching Sex and Sexualities consists of 16 individual chapters that are a diverse range of readings exploring the difficulties, possibilities, ambiguities, and even pleasure that comes with studying sex and sexuality. The collection is timely, especially given the increasing acceptance and production of queer¹ scholarship in international development and international relations studies. The focus on reflexivity² and the role of the researcher in producing knowledge about sex and sexualities is a particularly welcome contribution. Together, these chapters expand upon four themes of knowability, creativity and innovation, research contexts, and researcher identities and experiences, achieving the book’s aim of bringing about ‘innovative dialogues’ (p. 3). With a clear and intelligible style, the editors describe how the book contributes to the resistance of accounts of sex, knowledge, and power that tend to develop over-arching theories of sexuality (p. 5). Instead, the chapters in the collection are often inter-disciplinary, creative, personal, sexual, reflexive, and provocative. The introductions to each section provide well-rounded overviews of the four themes of the book. However, each chapter can be read independently as each considers digestible elements or aspects of research while also providing broader theoretical and methodological discussions.

Introducing the section on knowability, Paul Boyce rightly argues for the ‘mutual inherence of sex, sexualities and research as complex sites of mutual world making and as interconnected fields of power and engagement’ (p. 19). This position sets up the following chapters, which each considers the researcher’s role in creating sexuality through their research, and sometimes, in making their own sexuality through research. One of the more stimulating and methodologically interesting elements of the collection is the questioning of the way ‘sensation and desire…reside within sexualities research at different scales of analysis’ (p. 5), with many of the authors considering their own desires, sexual practices, and sexuality, and the ways in which these inform their research and engagement with research participants. They demonstrate, as Meg-John Barker writes, that ‘sex – and research about sex – is messy, complex and unpredictable’ (p. xii). For example, in the chapter entitled ‘Sex and the anthropologist: from BDSM to sex education, an embodied experience’, Nicoletta Landi explicitly considers her own shifting sexual desires throughout her research (p. 318). She argues that ‘the scholar’s desiring body – together with lust and pleasure – should be part of the research in order to produce a knowledge concerning sex and sexualities that is not deficient’ (p. 322).

Likewise, in P.J. Macleod’s chapter ‘Dirty talk: on using poetry in pornography research’ (p. 136), it is argued that just as pornography could be considered a ‘body genre’ in which it is not only judged for its ability to produce a physical response, so might poetry ‘be able to offer sex and sexualities scholars the potential to access and express something internal or intangible that may otherwise resist description’ (p. 143). It begs the question, to what extent do researchers’ and readers’ evaluations of scholarship and subject matter relate to their own arousal, disgust, or enjoyment of the phenomena at hand?

Another chapter that stands out is Eva Cheuk-Yin Li’s ‘Making sense of ambiguity: theory and method’. In this, the author considers the phenomenon of zhongxing in East Asian Chinese-speaking societies. Zhongxing, argues Eva Cheuk-Yin Li, refers to ‘heterosexual and queer women doing non-normative gender by using the term zhongxing, which literally means “neutral gender/sex” in the Chinese language’ (p. 43). Cheuk Yin Li attempts a ‘reflexivity of discomfort’ in which she employs Wanda Pillow’s conceptualisation of reflexivity³ ‘not as clarity, honesty, or humility, but as practices of confounding disruptions – at times even a failure of our language and practices’ (p. 56). In this way, Cheuk-Yin Li also calls on us to relate honestly what is un-knowable, especially across cultural lines.

Such discussions can also be found in Natalie Day’s chapter ‘Sexuality research “in translation”: first-time fieldwork in Brazil’. In part, Natalie Day explores ‘sexual slang’ and the way in which her own culture and context influenced her inability to interpret and translate evershifting, and contextually dependent ‘cultural grammar’ when it came to meanings of sex and sexuality (p. 199). At a more theoretical level, in the introduction to the section on negotiating research contexts, Yinying Huang asks ‘how can we understand people’s sexual bodies located in a different culture, experiencing different lives and expressed in different groups?’ (p. 176). While Yingying Huang provides a useful introduction to the role contexts play in researching sex and sexuality, and other chapter authors consider this in their research, the collection could have been strengthened with a more in-depth theoretical discussion of the relationship between culture and sex and sexuality. Notably, consideration of the role that culturally mediated gender norms play in sex and sexuality is missing.

The editors and many of the contributing authors provide insightful and reflexive thought on what can and cannot be known in sex and sexualities research. As Ken Plummer argues, ‘we can only ever be scraping the surface of the moment’ (p. 344). At times, however, some authors were guilty of overstating the possibilities of queer theory in their research, alluding to the almost infinite potentials without explicitly considering the limitations of queer research in practice. Perhaps relatedly, the collection would have benefited from a more in-depth discussion by the editors of the way in which some scholars develop their own sex, sexuality, and queerness through their research. Ken Plummer – an influential scholar in the field of sexualities – touches on this in his interview when saying ‘so to cut a long story short, what drew me to this field of study were very personal reasons about being gay and wanting to understand it and wanting to apply this theory I’d learned about to my life and the world’ (p. 340). Despite this, overall, the collection is a very engaging and perceptive read. In particular, ending the collection with an interview with Ken Plummer, after so many chapters have engaged with his work, provides a wonderful opportunity to reflect further on the present-day ramifications of his research.4  The interview is an interesting and humorous insight into Ken Plummer’s life and career.

In many ways, this collection is a celebration of the way in which sex and sexualities research is discipline-defying. It illustrates, many times, ‘the joy of (sex) research’ (p. xiv). Taken together, the contributions demonstrate the utility of scholarship that builds theory and methodology from the personal, practical, and sexual. This book is suitable for a wide readership. Each section introduction does a good job at unpacking terminology, background theory, and concepts likely to be encountered throughout. No chapter as a stand-alone reading is too technical or jargonistic to exclude first-time readers of sex and sexuality scholarship. At the same time, the book provides some practical engagements and theorising on contemporary issues in the study of sex and sexualities that would interest any seasoned scholar.

1. In essence, queer scholarship rejects heteronormativity, and fixed definitions and categorisations around people’s sexual and gender identity. Eve Kosofsky Sedgwick describes ‘queer’ as ‘the open mess of possibilities, gaps, overlaps, dissonances and resonances, lapses and excesses of meaning when the constitute elements of anyone’s gender, of anyone’s sexuality, aren’t made (or can’t be made) to signify monolithically’. See Sedgwick, Eve Kosofsky (ed.) (1994) ‘Queer and now’, in Tendencies, London: Routledge, 8.
2. Reflexivity is based on an understanding that while any particular piece of research may be described as objective and impartial, it will inevitably be influenced by the background, assumptions, and experiences of those undertaking it. Reflexivity, therefore, is an acknowledgement on the part of the researcher of their position in relation to the research being  undertaken, and the practice of seeking not to ‘invisibilise’ themselves from the research process and findings.
3. See Pillow, Wanda (2003) ‘Confession, catharsis, or cure? Rethinking the uses of reflexivity as methodological power in qualitative research’, International Journal of Qualitative Studies in Education 16(2): 175–96.
4. See Plummer, Ken (1981) The Making of the Modern Homosexual, London: Hutchinson; (1991) Symbolic Interaction: Volume 2 Contemporary Issues, Aldershot: Edward Elgar; (1995) Telling Sexual Stories: Power, Intimacy and Social Worlds, London: Routledge; (2003) Intimate Citizenship: Person Decisions and Public Dialogues, Seattle: University of Washington Press.