The Paula Principle: Why women lose out at work and what needs to be done about it 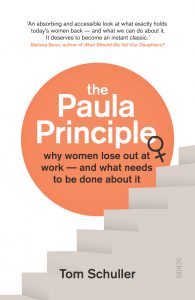 This book contrasts the well-known Peter Principle, ‘Every employee tends to rise to his level of incompetence’, with the author’s Paula Principle, ‘Most women work below their level of competence’. The author, who has worked in adult education in the UK and elsewhere, with women from many backgrounds, presents analysis of the factors contributing to his Principle and possible solutions for improving women’s situation.

The most convincing evidence Tom Schuller presents in support of his argument is what he calls the ‘crossover effect’: in most OECD countries,¹ women’s levels of education in all fields have surpassed men’s for several decades or more, and yet their levels of pay and promotion continue to lag behind those of their male contemporaries. He notes, however, that while women’s rates of education are going up all over the world, they have not yet reached a crossover point in developing countries.

The evidence for gaps in pay and promotion for women is also sound. He points out that there is a significant slowdown in progress in these areas for women in OECD countries. This competence gap, Tom Schuller argues, needs to be addressed because it is unfair, and because it wastes talent. The reasons behind it, he says, are fivefold. These are, firstly, discrimination and values – both overt discrimination and ‘values’ or unconscious bias are included in this factor, although the author does not discuss the sexual harassment that has been the focus of the #MeToo movement. Secondly, structural issues, which are described as caring responsibilities where women do the lion’s share of the work. Thirdly, self-confidence and identity. Women have different perceptions than do men with regard to their competence and how it is valued. Fourthly, social capital. Women and men have different kinds of vertical and horizontal social networks, and use them for different purposes. Fifth and finally, choice. Women and men make different choices about their careers, their work–life balance, and what gives them satisfaction. This factor differs from the other four, in that it describes choices women and men are free to make.

Tom Schuller interviewed 40 women (selected non-randomly), and invited people to take a poll on his website (www.paulaprinciple.com) to choose which of the five reasons outlined above are most important in explaining why women’s capabilities are underutilised. The book describes the reasons in a more carefully nuanced way than the website, but within the book itself there is inconsistency in the terminology used to describe the reasons; I refer here to the diagram on page 77 and the text in the chapters themselves. In the book, he outlines which factors people felt were most important (structural issues and choice), but the process he describes in the book (respondents weighting the percentage allocated to each factor) is not replicated on his website. These inconsistencies may reflect the author’s learning process, but they undermine the reliability of his arguments – did people polled on the more nuanced descriptions have the same understanding as those responding to earlier versions? More importantly, he does not discuss how the factors relate to each other beyond saying that they do.

While the focus of the book is on women and paid employment, the most interesting remedies proposed are not. In addition to the standard views on better career counselling, increasing the availability and affordability of child care, and decreasing bias, the author argues that instead of women conforming to the ‘male normalcy’ model (citing Carol Tavris, p. 189), we need to encourage greater diversity and non-linear options for men’s careers and their work–life balance so that this, instead, becomes the norm. Tom Schuller calls this ‘reverse convergence’. He also suggests the idea of a Basic Income or Civic Income (p. 208) be given a thorough review to assess its potential for
contributing to such change.

For those concerned with gender justice issues at a global level, the book is not relevant to poor women (or men) in the global South, where formal employment supported by workers’ rights remains an option only for the favoured few. A further frustration arises from the undermining of the pluses of Tom Schuller’s writing style – which tells illustrative stories of the lives of the women and men he interviewed – by the lack of any coherent theory of change. The emphasis on women’s situation obscures the relational impact on both women and men of exclusionary social and cultural norms. His conclusions, inviting a reframing of those norms, could be much better supported by an argument that looks beyond women, to the toxic effects of male norms on men and their families and communities. And this would need to include an examination of an issue that preoccupies feminists – how do we most effectively work to change these exclusionary social and cultural norms, at both the individual and collective level? Given the relevance of these issues to explaining the Paula Principle, the author could have perhaps been expected to offer some insight into these areas.

1.  The OECD, or Organisation for Economic Co-operation and Development, is made up of countries with the most advanced economies.