Women, Gender, Remittances and Development in the Global South 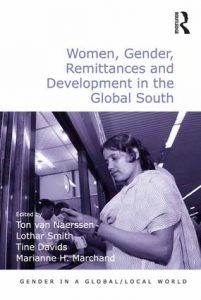 This edited volume is the outcome of a 2010 meeting on gender and remittances organised in Accra by Oxfam Novib, which sponsored the paperback version, followed by its hosting of a 2011 international expert meeting in The Hague. It also draws on the 2012 Global Forum on Migration and Development and the 2013 Global Forum on Remittances. It has been formally acknowledged since 2005 that the global volume of remittances sent by migrant workers from ‘developing’ countries through formal channels alone outstrips the total volume of official development assistance (ODA) and inward foreign direct investment (FDI).

The true volume is obviously far greater. This has given rise to earnest discussions about how governments might ‘harness’ remittances as a new form of development finance – something that would be almost certain to result in greater recourse to informal means to transfer money and to remit commodities rather than cash! Moving beyond the focus on their financial contribution, returning migrants have been variously cast as ‘agents of change’ or ‘development agents’, the torchbearers of new skills, ideas, and perspectives that can contribute to economic and social development. Less is said about those who eventually settle in the destination country, so their remittances dwindle away as they need to focus on supporting their immediate family.

Predictably, the topic attracts essentialist claims that (virtuous) female migrants are more likely than (wastrel) male migrants to remit their earnings whatever the personal sacrifice, as well as studies on the damaging psychosocial effects on the children whose parents (read: mothers) emigrate for work – thus adding a layer of maternal guilt to the pain of separation, only slightly alleviated by the supposedly empowered status of ‘the entrepreneurial migrant woman-mother’ (p. 219). Then enter stage-right the ubiquitous ‘development busybodies’, who fret about remittances creating dependency, stifling local initiative, and exacerbating (or perhaps more correctly, exposing) inequality, and seem morally exercised about recipient families spending hard-earned remittances on consumption rather than on setting up nice little income-generating projects – possibly overlooking the fact that ‘consumption’ covers everything from buying food and essential household items to paying for utilities, health care, education, insurance and perhaps, especially in this context, a means for loved ones to keep in touch regardless of distance.

The editors’ Prologue sets out the rationale for the book, and the meetings that inspired it: ‘the context in which remittances as a social phenomenon is embedded’, how the sending and receiving of remittances affects the empowerment or disempowerment of women, and how these in turn affect gender identities (p. 10). They highlight ‘the interlinking issues … (for example labour rights, human rights, security, dependency, wealth disparity)’ (p. 11) and the resulting complexity of gender, migration, and remittances. Understanding the importance of context leads to ‘debunking all kinds of myths around the benefits and/or costs produced with remittance activities’ (ibid.). Finally, they point to the need to recognise heterogeneity and to avoid stereotyped assumptions about the ‘nexus’ between gender, remittances, and development.

The volume comprises 14 chapters divided into four parts, including the editors’ Prologue and Epilogue. Setting the Context, with two overview chapters; Transnational Microcosms: Engendering Remittances in Daily Practices, with case studies on Bolivia, Ghana, Philippines, and Bangladesh–Malaysia; Policy Scapes to the Gender–Remittances Nexus, with a set of chapters exploring the impact of policy on migration choices and patterns; and Reflecting on the Nexus and Performative Power, which returns to how gender relations have been interpreted in relation to remittances.

Elisabeth Robert presents a useful grounding, based on UN-INSTRAW’s considerable body of multi-country research on gender and remittances. While there are variations between countries and regions, women constitute half of the world’s emigrants. Push factors tend to be a mix of economic, political, and human rights violations (including violence against women) in the home country; pull factors are predominantly the demand for care workers (nannies, domestic workers, home helps for elderly people) and for workers in the service sector (cooks, cleaners, waitresses) in the country of destination. She also alludes to migration for sex work, whether voluntary or not, as an area that merits greater research (p. 21). Importantly, Robert notes, ‘the existing gender wage gap in destination countries affects both native-born and immigrant women. Thus, migrant women are doubly affected as migrants and as women’ (p. 23) – neatly illustrating the complex linkages between women from migrant-sending and in migrant-receiving countries. Given their concentration in low-paid reproductive work, while migrant women tend to remit a greater percentage of their earnings, the absolute volume is lower than men’s.

In contrast, Rahel Kunz argues that:

“gender myths regarding migrant women … assert that women remit a higher percentage of their income than men, send remittances over longer time periods, channel remittances into health and education purposes rather than consumption, and are more strongly motivated by altruism, in contrast to men who tend to be cast as more self-interested emitters.” (p. 213, my emphases)

Ton van Naerssen examines the impact of migration on spouses, highlighting both variations in the largely small-scale studies that do exist (e.g. the degree to which a society is patriarchal, the demographic characteristics of the migrant-sending families and whether they are nuclear or extended, cultural expectations that remittance-receiving families should underwrite often extravagant cultural activities) and the significant remaining knowledge gaps since ‘the available studies focus mostly on remittances behaviour and not on the subjective meaning for the men and women concerned’ (p. 53).

This is in part because of, as the editors openly acknowledge, the danger of generalising from the particular given the overwhelming importance of context. For instance, in her chapter on Bolivia, Roos Helmich draws on the impact of transnationalism and remittances on just 30 households in one Bolivian city, Sucre. She finds, unsurprisingly given the machista culture, that there was a greater impact on the distribution of chores and time in households where the wife had migrated than in those in which the migrant was the husband. Men left behind to manage the household tended to be helped by other women (both family and non-family), were likely to buy rather than to cook meals, and might well spend the remittance income on buying a washing machine or employing a woman to do the laundry – cooking, washing, and cleaning being seen by both sexes as demeaning for men. Further illustrating the uniqueness of each case even in such a micro-study, Helmich finds a migrant woman and the family she had left in the care of her husband working ‘as a team’ (p. 87), another in which the returning wife planned, on the basis of her independent income, to divorce her husband (p. 91), and several in which the woman sent remittances not to her husband but to be managed by a trusted female relative, such as her daughter, sister, or mother (p. 90). Paradoxically, the existence of easy international communication has also allowed ‘for the preservation of the patriarchal character of the household and its inherent strong gender inequalities’ (p. 96).

The chapters on policy issues use case studies to suggest practical, gender-responsive ways in which to expand the choices available to all migrants, and specifically women. The chapter by Agnes Khoo on Bangladesh, for instance, is based on empirical evidence (a dozen interviews and a small survey of university students) but draws out several wider questions. She notes that male migrants are mainly married and below 35 years of age but that half of the female migrants, who tend to be slightly younger, are unmarried, separated, divorced, or widowed. It is safe to assume that most of those who are or have been married have major or sole responsibility for dependent children. Female migrants often end up as domestic servants, working in isolated, exploitative, and often abusive, slave-like conditions, from which they have no recourse or escape. Further, in view of the prevalent corruption, Bangladeshi migrants are wary of any government involvement in managing their remittances (p. 167). Nor are non-governmental efforts a panacea, since non-government organisations (NGOs) offering to ‘channel the migrant workers’ remittances into “microcredit” projects … are not without their shortcomings’ (p. 168). Khoo’s uncompromising conclusion is that, in the absence of structures to protect migrants’ human rights at home and abroad, and to offer the training required to obtain better-paid and more secure employment, ‘the call by the government, the private sector and NGOs on migrant workers to institutionalize their remittances may appear rather hollow and insincere’ (p. 169).

In their Epilogue, the editors reprise the main issues raised in each contribution, suggesting ‘that future research should address clearly which methodologies are pertinent’, pinning their own colours to the mast of multi-sited, longitudinal research that also considers ‘structural and discursive dimensions in explaining remittance behaviour’ (p. 251). In terms of improving the lives of migrants in ways that contribute to the Beijing commitment to women’s empowerment and gender equity, they end on a convincing call to support ‘the transnational networks migrants build’ (p. 252). To this might be added paying greater attention to South–South, North–North and, in large countries, internal migrant labour; and perhaps to the gradual and sometimes fraught transition from migrant worker to part of the permanent diaspora.

In sum, the volume offers an honest reflection on the significance of the topic, identifying specious assumptions and incomplete knowledge, and accepting that the very diversity of experiences and perspectives means that it is more important to establish fundamental principles to protect labour rights than to seek an approach that will fit all circumstances.