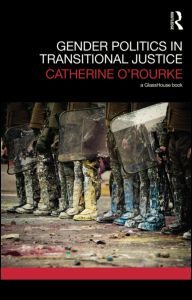 Catherine O’Rourke’s book Gender Politics in Transitional Justice – a mixture of empirical and conceptual engagement with transitional justice – is a measured and substantial contribution to contemporary gender analyses, transitional justice cholarship, and international law. Transitional justice encompasses the range of measures employed to facilitate legal redress and political stability in communities undergoing a transition from conflict or state repression, towards peace and stability. This book provides a kaleidoscope of ideas usefully organised around four of transitional justice’s defining components: justice, truth, reparations, and institutions.

The outcome is a book rich in detail, with concepts deftly threaded together via the insightful and measured writing style of the author. Catherine O’Rourke draws conclusions on the international dimensions of transitional justice, on the relationship between international and local practices, and how different forms of harm interconnect in transitional societies. In fact, the author’s efforts to weave together so much scholarship means that this is not an easy book to read, and I read it very slowly, but was, ultimately, amply rewarded.

In an effort to do justice to the complexity of Catherine O’Rourke’s work in a short review I have decided to examine some of the various themes and ideas that run through the book. Underlying these themes and ideas, it should be noted, is an important contribution to feminist methodologies, in particular the relationship between local and international frameworks and action, the conceptualisation and engagement with public and private spheres, the relationship between academic and activist feminism, and the links between conceptual and empirical knowledge.

The value of Catherine O’Rourke’s contribution rests in both the range of recommendations she is able to make – around the need for women’s participation, the role of feminist legal thinking in framing our expectations of international law and international institutions – and the nexus between legal doctrinal, normative, and political knowledge. As mainstream feminist approaches to international law increasingly focus on a narrow range of issues, such as sexual violence in armed conflict, trafficking, and women as vulnerable citizens generally, Catherine O’Rourke deftly reminds us that feminist approaches to international law are at their strongest when they embed the analysis of harm within a larger analysis of structural and institutional bias.She provides us with a series of recommendations for addressing harms against women without collapsing her work back into a model that depicts women as the eternal victim in transitional justice spaces.

The analysis of international law and transitional justice frameworks that Catherine O’Rourke produces is then usefully underpinned by understanding of what she describes as the ‘local fit’ of transitional justice frameworks. That is, through her empirical research she concretely engages with domestic state examples, acknowledging and incorporating further recommendations that respond to the different meanings and pressures placed on transitional justice processes in specific contexts.Her conclusions transcend the three case studies and allow her neatly to theorise the role and ‘fit’ of local women’s organising, local understandings of gender, and the specifics of the particular conflict. In particular, she alerts the reader to the selective uptake of international human rights law and how this often ‘fits’ into the existing gendered dimensions of both conflict and community. As a result, the link between private harms and public violence is a story that needs to be told continually, and needs the attenuated focus of international institutions. Not surprisingly, it is local actors who are best placed to contribute – to recognise and challenge the perpetuation of past gendered harms in transitional processes. For the author, this also requires, similtaneously, a stronger flow of internationally derived gender-sensitive standards in order to build a robust, local, gender-sensitive transitional justice process.

On some levels, Catherine O’Rourke’s thinking is in line with existing feminist analysis within contemporary transitional justice scholarship. It is, however, her description of gendered harm as constituted within a larger ‘web of gender-based harms’ (p. 37) that is the central innovation and contribution of this text. The web of harms alerts us to the existence of both legal, publicly recognised harms, and non-legal categories of harms, that interconnect to gender the nature of post-conflict risk and trauma. Catherine O’Rourke’s case studies then demonstrate the nuances that exist when we look for the web of harms, and the way in which private harms are produced, condoned, and perpetrated in a relationship with public violence. In the same way, attempts to provide truth or justice around the memory of public harms has, as necessity, a further need for inquiry into the private harms that accompanied political violence. This may centre on women’s reproductive rights, on the safety of the home, or the capacity for public institutions to investigate and respond to gender harms. The web of harms model then requires attention to be paid to international dimensions, rights, and responsibilities, as well as the local fit, to be fully apprehended and comprehended.

Alongside these concrete contributions to the field of transitional justice, I found the interweaving of empirical data and conceptual/analytical material a timely reminded of the need in feminist methodologies to attend to the range of knowledge production and the representation of women’s voices within our academic stories. This is a satisfying book and a welcome contribution to the literature that I will re-visit again and again.