Happy Abortions: Our Bodies in the Era of Choice 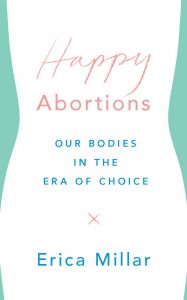 The title of this book had me both startled and intrigued. One does not tend to think of abortions as being ‘happy’. And indeed, this is one of the main arguments around which the book is fashioned: that social, cultural, political, and even economic representations of abortion over the past four decades have emphasised the putative negative effects of abortion on women. The dominant ‘emotional script’ that impinges on women, the author argues, depicts abortion as an incredibly difficult choice made in response to extraneous circumstances that are beyond the woman’s immediate control; it requires women to justify their abortion, preferably by citing the best interests of their potential children, to grieve their lost children after abortion, and to keep their abortions secret out of a sense of shame or guilt. (Introduction, p. 1)

Here is something new, I thought, as I eagerly turned the pages, expecting to find evidence to back up a refreshing new approach to this age-old topic – that many women after an abortion do not feel guilt, but simply relief or even joy. Alas, I was disappointed. Erica Millar uses sociological and legal sources from Australia, the UK, and the USA to support her thesis. She examines the discourses of the right to life movement, the women’s liberation movement, and the Abortion Law Reform Association in Australia to demonstrate how they have somehow worked in concert (despite being apparently opposing movements) to keep women who abort caught up in a sense of guilt and shame for not fulfilling the ultimate ‘happy’ goal of motherhood. While not wishing to claim that this is a useless undertaking – it is essential that those continuing to fight for women’s rights do not underestimate the huge impact of the anti-abortion movement and its discourse, particularly in the USA but increasingly elsewhere – I find a number of serious problems with the book.

First, from a purely scholarly point of view, I take issue with Erica Millar’s frequent use of ill-defined terms and sweeping generalisations unsubstantiated by evidence. For example: ‘Feminists themselves were quickly stereotyped as “selfish” in popular culture … ’ (p. 93, italics mine); or ‘Choice for women is often represented as entailing two incompatible options: motherhood or a career … ’ (p. 103, italics mine); or again, ‘Until abortion laws were liberalised, there was a cultural expectation that abortion harmed women physically, which compelled women who had abortions to attribute all subsequent reproductive health problems to their abortions, no matter how tenuous the connection (Baird 2001:200–201)’ (p. 142, italics mine). It is unclear how this popular culture or cultural expectation is expressed, nor how it can compel women, nor whether the author is speaking only about Australia at this point, or whether the assertions are taken to apply also to the whole of the USA and the UK.

Indeed, while the wide reach of Erica Millar’s research is laudable (see the 37-page bibliography), it is maybe this that dilutes her thesis, rendering it difficult to grasp. She casts her spotlight over four decades covering three countries whose legal contexts for abortion vary considerably, not least because both Australia and the USA have federal systems where states’ regulations may carry more weight than federal law, while the UK’s 1967 Abortion Act applies across the board to all
regions except Northern Ireland. Erica Millar does not give space to the recognition that each legal context has also been pushed to the limits by women’s rights activists to gain ground in the struggle for access to safe abortion.

One of Erica Millar’s main points is that the articulation of ‘pro-choice’ by the women’s liberation movement in the 1970s was actually damaging because it was co-opted by anti-abortion forces to argue for ‘real choice’, that is – for them – information telling women that abortion is damaging, and motherhood is the only way to achieve happiness. This is an important point, and one that is perhaps overlooked by today’s activists. Indeed, Erica Millar argues, ‘Motherhood becomes a pregnant woman’s choice even when, paradoxically, her choice was abortion’ (p. 160). However, she does not examine the historical political reasons why ‘pro-choice’ was employed as a term, rather than ‘pro-abortion’. In the eternal debate about abortion, terminology is constantly changing hands and values as different lobbies try to out-do the opposition. Thus, even if the term ‘pro-choice’ has been co-opted, the original intention of supporting the legal right to obtain an abortion is the essential goal that Erica Millar loses sight of in her differing political stands.

I was waiting, in the chapter entitled ‘Happy Choices’, for Erica Millar to give us some material behind the book’s title, some important findings from sociological research with women in different countries and circumstances concerning abortion. But no. Rather, she attempts to show that even ‘happiness’ has somehow been co-opted and is used as a way to fool women that ‘the promise of happiness impels women towards marriage and motherhood’ (p. 105) and that ‘the norms of
women’s happiness that circulate in the postfeminist discourses … position a child of one’s own as the happiest object for women, particularly for pregnant women’ (p. 105). This chapter, in particular, demonstrates a singular lack of serious research and citations regarding the concept of happiness, and abounds with difficult and undefined terminology such as ‘neoliberal political rationality’ (p. 107), the ‘economy of familial happiness’ (p. 110), and ‘normative femininity’ (p. 121).

The long and repetitive chapters entitled ‘Grief of Choice’ and ‘Shameful Choices’ add nothing to what is said in the introduction or earlier chapters. It is only when we get half-way through the final chapter that the positive thrust appears:

This [1 in 3 Campaign] narrative associates abortion with feelings of relief, gratitude and even happiness; accompanied by the political slogan ‘Abortion on demand, without apology’, it is clearly a retort to the unwritten contract examined in this book where, in exchange for having abortions, women are required to profess a degree of sadness and distress (p. 273).

Her thesis, that the ‘hegemonic narrative of abortion that centres this book is fundamentally antiabortion and needs to be dislodged’ (p. 276), is a hugely welcome statement. What I would have wanted from the book, though, is for Erica Millar to point the way to a kind of political activism that goes beyond the ‘first-person narratives’ so coveted by 21st-century social media; something that will help reinforce the international women’s rights activism that is still going strong¹.

Note
1. See, for example, the international campaign for women’s right to abortion, www.safeabortionwomensright.org.