The Big Push: Exposing and Challenging the Persistence of Patriarchy 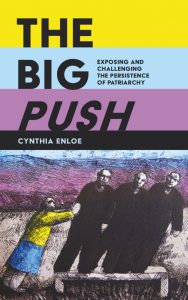 Just what does it take to make her story history? That is, to ensure our collective human memory reflects the perspectives of women as much as the perspectives of men, and – critically – gives weight to women’s analyses of how we’ve ended up where we are and how to chart a better course in future?

In this latest of her studies on power, gender, and equality, Cynthia Enloe considers these questions using the conceptual tools and rich experiences gained over a life spent carefully analysing the past and the present, and making the links that others haven’t. The key starting point in this fascinating reflection on what sustains patriarchy and its many faces, is the Women’s Marches of 2017 in the wake of Donald Trump’s election as US President. This is an important book because, as Cynthia Enloe argues, ‘describing patriarchy’s stubborn survival and its remarkable adaptability is not to drape it in a mantle of unassailability…quite the opposite’ (p. 17). To challenge it, we need to recognise it – not only in the war cemeteries of the two World Wars, and not only in the Oval Office – as Cynthia Enloe observes so witheringly in the title of the book’s Preface, ‘It’s Not All About Trump’. It is also – and equally – about the complicity of entire societies in a gendered set of unequal power relations. There are the interdependencies between toxic masculinities and – if you like – toxic femininities; the women in stilettoes and skirts who teeter beside the powerful men in suits, proving political power’s links to (hetero)sexual conquest of women made artificially, appallingly vulnerable by gender roles and relations. And there are the quiet acts and thoughts of resistance from women and girls who are not free to overtly challenge patriarchy but who signal their opposition through ‘a flick of the skirt’ (p. 87).

I found this book a dream to read – despite its hard-hitting subject matter that challenges all of us to activism, and particularly speaks to those of us who are able to choose to march – and need to, in a climate of closing space for civil society activism and concerted challenges to notions of individual human rights and in particular to women’s rights. This book is a zeitgeist publication, which marks a moment in international and national politics characterised by a surge of right-wing populist aggression fuelled by ‘toxic masculinities’ that use a particular narrative: of ethnic purity and superiority, of inferior peoples who live in ‘shithole’ countries, of making our nations and countries ‘great again’ by banning mixing, nuancing, intelligence, and non-violence. In a fascinating and brave account, Cynthia Enloe focuses on the complicity of all involved in memorialising war through mythologising and what she terms ‘patriarchal forgetting’ (p. 77).

Long-term admirers of Cynthia Enloe will know she writes in a pithy, witty, clear, and accessible style that (together with her knack for finding a catchy title to draw in her readers) ensures her work is accessible and easily read and absorbed. She has the popular touch. She also has the ability to leave the reader fired to action, not paralysed by the bleak picture that she depicts. Acts of resistance to patriarchy are scrutinised, and her conclusion is ‘updated patriarchy is not invincible’. While it twists and turns and morphs like a virus, women – and non-conforming men – continue to find the energy to track it and root it out. Constant vigilance – and attention to making her story history – is the key. As Cynthia Enloe argues:

History is not just about ‘yesterday’. It is about today – and tomorrow. How we craft our personal and our collective memories shapes how we imagine ourselves in the world today. This, in turn, will influence how we feel and act tomorrow.What counts as courage, what deserves contempt, for whom do we grieve, who are the we in ‘we’? Each is either reinforced or challenged by how and what we choose to remember. It is for this reason that feminists pay such close attention to what is commemorated – and in what way, and by whom … It is why feminist libraries, feminist archives, feminist museums and feminist historians are each so central to current challenges to patriarchy. (p. 77)