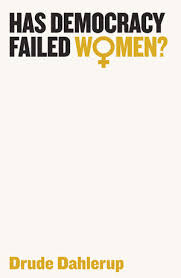 Feminists have always expected that democracy would deliver justice for women and opportunities for participation, based on the liberal commitment to the equal rights of each individual, and on the democratic commitment to fair competition for decision-making roles. As Drude Dahlerup says in this slim volume: ‘women … need well-functioning and open democracies’ (p. 115) to secure rights, resources, and opportunities to participate in decision-making. We need democracy. But has democracy delivered? It is an urgent question in the context of the swelling tide of illiberal democracy – of populations voting for leaders who curb free speech, close borders, expel immigrants – which is driven not just by xenophobia and racism, but also resurgent patriarchal values. These have democratically delivered policy reversals that, for instance, impose restrictions on women’s reproductive and sexual freedoms (Poland, USA), or decriminalise domestic violence (Russia), or criminalise homosexuality (Uganda, Egypt).

So, has democracy failed women and if so, why? Drude Dahlerup’s reflections on this topic are of interest because of her sustained efforts to increase numbers of women in public decision-making. She has played a central role in the development and defence of fast-track methods to overcome voter and party resistance to nominating women candidates for elections – namely gender quotas. Her enormously influential 1988 article on women in Scandinavian politics¹ introduced the expectation that after a certain tipping point (usually 30 per cent of legislatures), women (and indeed other groups of newcomers) might constitute a ‘critical mass’, moving from a disparaged token minority to a support group with influence on decision-making. (This work is more guarded on the connection between presence and influence than is often assumed.²) She is the architect of the Gender Quotas Database,³ and is a senior advisor to the Inter-Parliamentary Union, participating in delegations advising on electoral processes and the application of quotas the world over. Vignettes from these encounters (in Tunisia, Cambodia, Palestine, Northern Ireland, and more) pepper her book.

Perhaps inevitably, given a lifetime focus on removing obstacles to women’s success in competition for public office, most of the book looks at the history and effectiveness of measures to get women into political institutions, and the ways these are justified in political debate. But more women in public office do not a democracy make. The presence of women in public decision-making is rarely used as an indicator of the quality of democracy – and there is a good reason for this. As Drude Dahlerup points out herself, there is no serious difference between the proportion of legislative seats held by women in democracies and authoritarian systems. According to Freedom House data for 2015, women hold 25 per cent of seats in ‘free’ and 22 per cent in ‘not free’ systems (p. 53). In fact, authoritarian leaders have arguably exploited the assumed connection between women’s presence in public office and liberalism, padding their legislatures and institutions with women to distract attention from their attacks on accountability systems. A country like Rwanda, which scores well on the Global Gender Gap Index4 mainly because of women’s 55.7 per cent share of legislative seats, is no great example of protections on civil and political rights, let alone democratic accountability.

It is only relatively late in the book, after having discussed the mechanics of electoral and quota systems and the ‘stickiness’ of male dominance of public institutions, that Drude Dahlerup asserts the importance of democracy for the achievement of gender equality policy goals. She concludes that the lesson learned ‘is that strong women’s organisations, lobbyists as well as grass-roots movements, and considerable representation of women in decision-making forums, including parliaments and governments; are needed in order to adopt and implement (gender equality) policies – and in order to persuade male politicians and political parties as such to support them’ (p. 116). These seem pretty foundational conditions for a connection between democracy and gender equality, but there is something that needs more attention: ideas and ideology. For  gender equality outcomes, the lobbyists, the women’s organisations, the politicians and parties, need to agree on specifically feminist interests and preferences. This largely goes unsaid here. But it merits outing. And more attention should be given to the emergence and sustainability of feminist movements and political parties willing to take up feminist policy platforms. Because where democracies have failed women is not in not offering enough female politicians from which to choose, but in not providing women voters with programmatic parties and policy platforms dedicated to overturning male dominance and female subordination.

This is why the ‘liberal’ preface to ‘democracy’ matters enormously. Rivers of feminist ink have denounced the gender bias in Western liberalism.5 Still, liberalism’s respect for equal rights has offered a crucial entry-point for women to politics, has required democracies to create institutions defending minorities against the majority, and has created institutions to hold leaders to account. These institutional irritants to the popular will (protection of minority rights) and to populist leaders (free press, freedom of association, judicial review, transparency in budget management) are absolutely vital to the prospects for gender equality policy successes in democracies, not because women are a minority (they are not), but because feminists are. Few elections have been fought or won on feminist policy platforms, yet we know for a fact that regardless of popular preferences, advancing women’s rights is vital for economic growth, national security, and community wellbeing. The expansion of liberal institutions has been the location of democratic developments that ensure women’s inclusion and advance gender equality on the grounds of democratic justice. Over time, these protections have helped erode gender biases in politics and have made parties advancing feminist policy positions more attractive electoral propositions. These gains are currently being tested in democracies.

Has Democracy Failed Women? does not get into these issues, but it is perhaps unfair to expect that it should. This short work is part of a series of essays published by Polity Press to address ‘Democratic Futures’. It reads as a personal reflection on years of work on women’s engagement in politics, and the field notes from democracy assistance missions give a real sense of the degree to which democracy is a constantly improvised project.

The book could do more to show whether democratic failings in relation to women have contributed to the current assault on liberal democracy. The book ends with a chapter on ‘Women in Global Politics’. International institutions have played an important role in by-passing domestic patriarchies to set advanced normative standards on women’s rights (for instance, United Nations Security Council Resolution 1325 on women, peace, and security requiring women’s engagement in conflict resolution). But decision-making in international institutions is actually not democratic, and on the whole these institutions lack accountability mechanisms (with the exception of the International Criminal Court’s prosecutions for individual cases). If the politics of negotiations in these institutions were to be seriously discussed, then it would be important to pay attention to an insidious and growing coalition against women’s rights in international negotiations, where conservative states, countries where Catholicism or Islam is the dominant religion, former Soviet republics, and the Vatican work in an unconventional alliance focused on norm-spoiling specifically in relation to women’s sexual and reproductive rights and freedoms.6 Democratic space is shrinking in many of the countries in this group, and one of these countries, Russia, has made a project of attacking democracy far afield. Attacks by this group on women’s rights show that it sees a connection between the suppression of women’s (or feminist) rights and the success of the illiberal regimes it is promoting. To the extent that democracies have so far failed to institutionalise feminist preferences and legitimise feminist voices, voices that could help defend against these attacks, democracy has indeed failed women.