Gender and Employment in Rural China 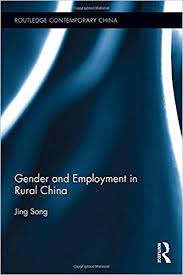 This book, which is based on Jing Song’s doctoral dissertation, argues that in rural China, local ‘development models’ centred on industrialisation and urbanisation interact with families’ gendered divisions of labour to create different opportunities and obstacles for men’s and women’s employment. Following a brief introduction and theoretical review, four chapters present the authors’ findings about gendered employment in four village case study sites in coastal Zhejiang and Jiangsu provinces, and the inland provinces of Hebei and Ningxia. Drawing on rich field research conducted over several years, Jing Song argues that despite increased employment choices and the individualisation of wages brought about by national policies and local economic growth, discriminatory gender practices nevertheless continue to disadvantage rural women compared to rural men in each of the four sites. Not  unexpectedly, men benefit from contemporary norms regarding gender seclusion (i.e. differing assessments about safe mobility and migration for women and men), beliefs about men’s higher risk tolerance and entrepreneurial acumen and managerial skills, and their wider, more influential social networks.

Some of the finest sections of this book describe changes in village economies, household demographics, and forms of employment, and make insightful arguments about the linkages between these changes. Chapter 2 contains an important discussion of how rural women’s ‘entrepreneurial mentalities and activities are often portrayed as deviating from their rurality and femininity, and development per se often introduces new forms of exploitation and self-exploitation in the growing rural–urban inequalities’ (p. 22), and Chapter 3 traces rural women’s initial predominance in Zhejiang’s township and village industries in the 1980s, and their subsequent exclusion from leadership positions in those industries during enterprise privatisation in the 1990s.

So far so good, from a feminist perspective. But there are some serious methodological, theoretical,
and analytical shortcomings in this book. Notwithstanding Song’s repetition of Michael Douglass’s caveat that ‘householding’ is shaped by power relations and contestation (Douglass 2006), her choice of interviewees and identification of which factors advantage men in the labour force is nonetheless limited by an idealisation of co-operation within the unitary household, and naïve acceptance of customary views about women’s ‘family responsibilities’ and the Chinese state’s legally questionable position that rural property is the property of households. For this reason, while a great deal of attention is given to co-operative divisions of labour among generations of women within households, almost none is given to the employment of women and men who are affected by family discord, domestic violence, and divorce. Similarly, nowhere is there a discussion of the discriminatory employment consequences of men’s disproportionate occupation of village political offices, and their ownership and control of ‘household’ resources such as land, savings, compensation funds, and credit.

In Jing Song’s modernisation framing, development is conceived primarily in terms of the transfer
of labour from agriculture to industry and services. Hence, her focus is not on agrarian transition
(which involves the accumulation of capital through commodification of land, labour, and produce), but rather on de-agrarianisation, and employment away from the farm. This results in a skewing of her interview sample, and a blind spot in the analysis. Although the author acknowledges that wage labour in commercial agriculture has increased significantly in both her Jiangsu and Zhejiang research sites, gender and employment relations among this growing segment of the rural workforce are not examined.

A related problem is apparent at the level of causal explanation, and especially in Jing Song’s
decision to account for her findings with reference to the widely used, but ill-defined concept of
local ‘development models’. Nowhere does the author explain in what sense the four selected villages
are ‘development models’. Certainly, she describes how they are characterised by different
processes and patterns of industrialisation and urbanisation. However, my copy of the Oxford English Dictionary defines ‘model’ as a representation of a person or thing or of a proposed structure; a thing
used as an example to follow or imitate; an excellent example of a specified quality; a simplified
description of a system or process. The different processes and patterns of industrialisation and
urbanisation in these villages were historically and contextually contingent, rather than being
planned. They are not representative of a proposed structure or quality worthy of imitation, and
nor would their replication be possible, even if it were desirable, because of the unique combinations
of factors driving industrialisation and/or urbanisation in each village.

Other problems are, first, that Jing Song’s argument hinges on a very questionable causal association:
factors that are unique to local changes and contexts are being posited as the cause of common  outcomes. It seems implausible that variations in local ‘development models’ would produce the constant pattern of discriminatory employment Jing Song found in all the case study sites. Second, women’s adaptations to patriarchal customs also are sometimes advanced as a cause of their  disadvantage. For example, on page 137, Jing Song writes that ‘[w]omen were sometimes empowered with access to individualised work outside home, but their adaptive move to take up the low-end jobs…reinforced their devalued position in the labor market’. In what sense is individualised, exploitative employment ‘empowering’, and why blame women for having been relegated to low-end, underpaid positions? Even if the reader were willing to accept this circular reasoning, the key sociological term ‘empowerment’ is not explained, and no measures of ‘empowerment’ are provided. Nor are definitions given for other foundational concepts used in the book, such as peasant, elite, and agency. A third puzzling gap in Jing Song’s causal explanation is that education, one of the most important variables associated with employment outcomes in orthodox development literature, is overlooked. Although data are provided about the increasing years of formal education received by younger villagers in three of the case study sites, the author does not discuss whether higher education influenced the gendered employment outcomes she observed.

These weaknesses aside, this is a book that would be of interest to critically minded development
planners, and undergraduate students studying the ambiguous linkages between economic and
familial change and gender-differentiated employment, especially in China.