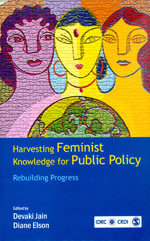 A cacophony of critical voices has emerged to reflect on flaws in patterns of development leading to the multiple crises of food, fuel, finance, and employment. Blame has been heaped upon individual actors and institutions alike, reproaching global economic systems and leaders for their inability to deal with growing inequalities.

Yet with so many minds asking the question ‘What went wrong?’, very few have been able to answer the question ‘Where do we go from here? Harvesting Feminist Knowledge for Public Policy: Rebuilding Progress fills that gap, presenting an inclusive and comprehensive range of feminist voices that argue that rebooting (or returning to ‘normality’) is not an option. The only way forward is to address the root causes and effects of the crises, drawing on the experience and knowledge of those best placed to present solutions: women.

This volume captures the thinking of a wide range of feminist scholars, practitioners and advocates across many disciplines. They argue collectively that it is time to ‘harvest’ feminist knowledge to plot alternate paths for human progress, divorced from pre-existing economic and development frameworks. The global financial and economic crises that erupted in 2008 and continue today are linked to another set of crises – food, water, energy, climate change, and women’s unpaid care work. These crises are a result of a failure in the global economic system, which cannot be fixed using the same broken tools. Rather, a rethinking of economic democracy, social and economic transformation – transformation that ‘bubbles up’ rather than ‘trickles down’ (p. xxxviii) – is the only way to power production, lead growth, and move the economy in a broad-based, socially equitable direction.

Many of the volume’s contributors, including Diane Elson and Stephanie Seguino, have been vocal advocates for the mainstreaming of feminist economics for many years (see, for example, Gender & Development’s July 2010 issue on the financial crisis). In Harvesting Feminist Knowledge for Public Policy, they are joined by an array of authors from government, academia, and civil society, all hailing from different regions of the world, and the book illustrates the diversity of socio-economic experiences of women, globally. The chapters by Diane Elson, Stephanie Seguino, Lourdes Benería, Naoko Otobe, and Itzá Castañeda and Sarah Gammage look at the broad trends of gender and contemporary development. The chapters by Yassine Fall and Devaki Jain examine the problems of market-driven agricultural development, demonstrating the flaws in contemporary development thinking. Solita Collas-Monsod, Hiroko Hara, Lanyan Chen, and Narta Núñez Sarmiento consider the pressures that have limited realisation of gender equality in development, drawing on the experiences of their respective countries. The chapters by Renana Jhabvala, Patricia McFadden, and Jael Silliman focus on feminist or women-led mobilisation to achieve equality, using the examples of the Self-Employed Women’s Association (SEWA) in India, the hijacking of donordriven ‘gender mainstreaming’ in Africa, and various types of ‘progressive masculinities’ that can help women in their struggle for gender justice.

Perhaps the most informative component of the volume is the collection of compelling case studies, which reveals contrasts in the relationship between the state of economic development and the degree of gender ‘uptake’ – the role played by gender equality and women’s empowerment in policy formation. The cases of Japan and Cuba are demonstrative: Hiroko Hara’s chapter ‘Modernity, technology and the progress of women in Japan: problems and prospects’ shows that while Japan has rich reserves, when it comes to social and economic resources, its development has not shown a corresponding advance in women’s equality as demonstrated by its ranking in the United Nations (UN) Development Programme’s gender empowerment measurement (GEM). In contrast, Marta Núñez Sarmiento’s chapter, ‘Cuban development alternatives to market-driven economies: a gendered case study on women’s employment’, demonstrates that it is not necessary to be a rich country in order for women and society to advance. Cuban ‘progress’ has promoted economic transformation that ensures material well-being for all, and changing ideological and cultural patterns of inequality and discrimination – in short, changing the social relationship that conditions poverty. Though with far more mixed results, Solita Collas-Monsod’s chapter reveals that this pattern has been repeated in the Philippines, a country with lower per capita Gross Domestic Product than Cuba and a low Human Development Index rating, but a higher GEM indicator, than regional counterparts South Korea, Malaysia, and Thailand. In the cases of Cuba and the Philippines, ‘development’ has not simply been a synonym for economic growth, but rather a means of transition towards a fairer society. However, as the authors note, much remains to be teased out on how and the extent to which women’s leadership in industry and policy can and will be integrated into public policy.

Perhaps the biggest shortcoming of this volume emerges from this concluding point: the question of how to make these progressive proposals for alternative strategies for development a reality. The authors are quick to point out key public policy alternatives, including tangible steps on how to induce gender-sensitive growth (i.e. a recognition of the unpaid care economy through the collection of time-use data, the provision of public investment in social infrastructure, employment creation strategies and macroeconomic policies that promote small-scale enterprises), and also admit that the book does not offer a one-size-fits-all path to equitable, just, and sustainable development. But at the same time, feminist knowledge – especially feminist economics – has not, for the most part, been able to cross the barriers into mainstream economic thought. It is doubtful that a convincing, clearly presented, and wellsubstantiated volume such as Harvesting Feminist Knowledge for Public Policy: Rebuilding Progress will end up in the reviews sections of long-established publications like The Economist or The Daily Telegraph. The book’s policy recommendations might take years to be absorbed by those formulating national, regional, or international agendas.  Nevertheless, this volume comes at a crucial point, when the ongoing financial and economic crises have forced policymakers to re-evaluate their toolkits. However, the book’s foreword, by UN High Commissioner for Human Rights, Navi Pillay, is an indicator that the ideas of the authors are making inroads into mainstream international policy formation. Slowly but surely, a more nuanced and critical perspective of ‘progress’ for the world’s women is emerging, driven on by volumes such as this.