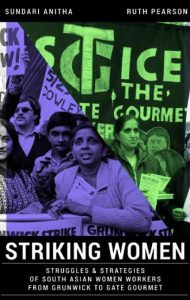 This book tells the story of two pivotal moments in the history of the UK labour movement: the strikes of predominantly Asian women workers at the Grunwick photo processing factory (1976–7) and at the Gate Gourmet airline catering company (2005). The issues addressed by authors Sundari Anitha and Ruth Pearson lie at the centre of debates on trade union democracy: that is, the relationship between trade unions and their members. The Grunwick strike, in particular, has achieved legendary status in the labour movement as an instance when trade unions are understood to have responded to the interests of women and minority ethnic members.

But the industrial action taken at Grunwick and Gate Gourmet were complicated episodes in the history of the labour movement. The women involved have been, as the authors put it, ‘celebrated as industrial activists, but also cast aside as inconveniences to the trade union movement in the UK’ (p. 185). In both cases, the relationship between the trade union and the women workers effectively broke down, and in both cases the action was ultimately unsuccessful. However, in both contexts, there are important lessons to be learned about the intersection of gender, race, and class for understanding how the structures of capital shift and change in response to labour, and how relationships of solidarity and collective organising can bring to light injustice and the casual abuse of workers’ rights – in this case the rights of migrant and minority ethnic women workers.

The book will be welcomed by a wide range of people, working on or studying issues of women’s rights, labour rights, and women’s organising. It adds to a wealth of labour studies literature on the Grunwick strike, but, crucially, it adopts a different approach. Striking Women re-examines these two ‘moments’ in labour history, understanding them not as single events, but as the result of women’s experiences over many years: of their lives as migrant women and how this shaped their experiences of the labour market, as well as their organising responses to the discrimination they faced. The authors do this by analysing both the Grunwick and Gate Gourmet strikes through an in-depth study of the life histories of the women themselves.

The great strength of the book lies in its detailing of the specificity of the women’s experiences of work and labour relations, but within their much broader context of the intersectional experience of gender and racial  discrimination, class, family and community background, and the different patterns of migration that brought these particular women to the UK. It is this balance of structural analysis and embedded research that makes it possible for the reader to see beyond the entrenched narratives in traditional accounts of women’s organising and trade unionism. These often pay inadequate attention to the complexity of women’s lives, and the tensions they hold, in this case, between the women’s identity as workers, and their identity within a South Asian migrant community. Addressed, for example, is the way the women involved balanced their work organising the strike with maintaining a ‘normal’ life at home:

[w]e did not feel she was involved in such a big strike. We did not miss her at home. We used to get our food on time, everything was done as usual. She used to come and go and manage her time such that we did not realise that it was such a big event. (p. 125)

While the authors’ approach reveals both the solidarity of the working class, and the failure of the leadership of the trade unions involved in the disputes, what it ultimately provides the reader with is an understanding of the agency of South Asian women migrants in the UK, and the particular journey of the women who led their colleagues on strike:

[w]hat you run here is not a factory, it is a zoo. There are monkeys who dance to your tune, but there are also lions here who can bite your head off. And we are the lions, Mr. manager! I want my freedom! (p. 113)

This focus on women’s voices shows how the intersection of class, gender, and migration is integral to women’s experiences, and how their responses challenge the structural silencing of women workers.

Another of the book’s important contributions is its analysis of the way in which the labour movement became increasingly focused on individual rights in the late 20th century, to the detriment of more collective responses. This was, in many ways, a response to the increasingly punitive legislative environment, but it also mirrored a similar pattern in other social movements. The ‘smart economics’ language adopted by parts of the international women’s movement, for example, can be seen to have privileged neoliberal voices and arguments in order to gain ‘influence’, but it in fact resulted in the undermining of more radical, dissenting voices.

However, such an analysis must also allow us to look forward in a more positive light. In recent years, trade unionism in the UK has returned to prioritising collective action, and areas such as ‘community unionism’¹ hold particular potential for reinvigorating a movement that lies at the heart of struggles for justice and equality. We can also see that there is an upsurge in collective organising in women’s movements (e.g.#NiUnaMenos in Latin America, or perhaps in the UK/US contexts, the #MeToo movement). These examples show how the relationship between individual women/women workers and collective action is alive and well. This represents the best hope for challenging a neoliberal system which has systematically undermined women’s voices, and institutionalised discrimination against them. Ultimately, this book represents a part of the conversation that can move us all forward – together.

1  Community Unionism [as outlined by academics and activists such as Jane Holgate in this video
or this publication  emphasises the model of ‘whole worker’ organising. This means that organising takes place beyond the workplace, and enables trade unions to work with and organise people in their communities as well. A success story of this approach has been the Citizens UK movement, which grew from the London Citizens’ campaign for a living wage, bringing together trade union and community organisers.