Reviewed by Nancy A. Naples 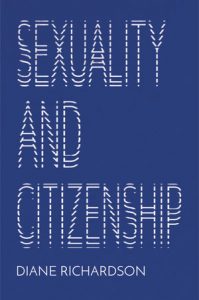 Diane Richardson began writing about sexuality and citizenship not long after David Evans introduced the term ‘sexual citizenship’ in his 1993 book, Sexual Citizenship: The Material Construction of Sexualities. In her first article on the topic, published in Sociology in 1998, Diane Richardson analysed the limits of citizenship as it applied to gay and lesbian people, and how its construction depended on the divide between the public and private spheres. I taught my first course in sexual citizenship the following year, and quickly adopted her article as recommended reading for my students, and her many subsequent publications on the topic have been a mainstay of my teaching over the following years. With analyses of the intersection of sexuality and citizenship having expanded and diversified since the 1990s, Diane Richardson’s history of scholarship in this field makes her just the right person to chronicle these changes, which she does in Sexuality and Citizenship.

In the introductory chapter, Diane Richardson explains why she was initially sceptical of the adoption of the term ‘sexual citizen’. She feared that it would limit understanding of the co-construction of sexuality and citizenship and that, used as part of a strategy for people to claim their rights, it would prompt a shift to a series of discrete rights claims from ‘a dynamic process of public and personal orientation towards certain practices, values, bodies, relationships’ (p. 3).

The subsequent chapters of the book are divided into two parts. Part I, ‘Rethinking Sexual Citizenship’, addresses ‘What is Sexual Citizenship?’ (Chapter 2), the ‘Limits to Sexual Citizenship’ (Chapter 3), and ‘Sexualizing Citizenship’ (Chapter 4). In Chapter 2, Diane Richardson chronicles the diverse definitions of sexual citizenship, and the many associated, complex debates, in language that is accessible to those new to the field, while also offering an in-depth critical overview that is meaningful for those of us who have had a long interest in the topic. In Chapter 2, she traces relevant academic developments over the past 20 years, managing to cover most of the key concepts and processes that have deepened academic understanding of sexuality and citizenship, including heteronormativity, homonormativity, homonationalism, hetero-sovereignties, homocolonialism, and neoliberalism, and the ways in which these function to derail the radical impulse of earlier theorisations. She also provides an important analysis of the limits of considering sexuality and citizenship through the lenses of human rights, choice, and privacy. In the final chapter of Part I, Diane Richardson discusses ‘the ways in which citizenship is sexualized’ and the fact that ‘all citizens are (sexual) citizens, although they are not equal (sexual) citizens’ (p. 99). The key themes of this chapter relate to critiques of the decontextualised and individualised approaches to sexual citizenship.

In Part II, ‘Transforming Citizenship? Sexuality, Gender and Citizenship Struggles’, Diane Richardson shifts attention to constructions of sexuality and citizens, globally (Chapter 5), the role of the state and neoliberalism in a global context (Chapter 6), and ‘Materializing Sexuality’ (Chapter 7). In Chapter 5, Diane Richardson concentrates on persistent inequalities on the basis of class, gender identity, national origin, and race, for example, even in countries ‘where new forms of citizenship status have been gained’ (p. 104), and the diverse ways that nation-states accommodate or resist activist calls for sexual citizenship. She notes that despite the transnational expansion of activism on behalf of sexual citizenship, ‘there has been a similar scaling up of opposition to sexual rights and women’s rights, and recognition of sexual and gender diversity’ (p. 115). Another significant dimension addressed in this chapter is the extent to which claims for sexual citizenship are built on Western formulations that fail to account for non-Western political and cultural contexts. Western-centric approaches to citizenship, she argues, are incapable of addressing the complexities in non-Western settings where ‘religious and cultural traditions still outlaw homosexuality and fear of, if not actual, violence is an everyday reality for sexual and gender minorities’
(p. 124).

In Chapter 6, Diane Richardson deepens the discussion on neoliberalism and its related policy frameworks in which ‘marriage becomes a practice of responsible (sexual) citizenship’ (p. 136) and, quoting cultural analyst Lisa Duggan, emphasises that ‘[n]eoliberalism in fact has a sexual politics’ (p. 139). Here, Diane Richardson examines the ways in which the neoliberal politics of  recognition as a movement strategy to gain legitimation within the larger political field serve to depoliticise claims-making and political mobilisation. Summing up her critique of the Western-centric and neoliberal formulations of sexual citizenship, she ‘highlights how issues of (sexual) citizenship and gender equality have become important boundary markers in establishing one nation’s moral ‘superiority’ over other nation states’ (pp. 156–7).

In Chapter 7, the final chapter, Diane Richardson addresses the limits of approaches to sexuality and citizenship that do not recognise their materiality – that is, that ignore the wider social and political material context in which they are constructed and expressed She discusses the economic dimensions and class dynamics that, she argues, have been neglected in much thinking about the intersection of sexuality and citizenship. She points out that the ‘lack of attention to economic diversity’ has ‘been compounded by a lack of intersectional work in the field of sexuality and (sexual) citizenship’ (p. 167). It is indeed important to consider how constructions of sexuality and citizenship differently affect the lives of citizens, non-citizens, and those whose relationship to the state is ambiguous, as they intersect with ability, age, gender expression, and immigrant status, among other dimensions. I, myself, would suggest that it might also be relevant to explore the intersection of the state and other institutions in shaping sexual citizenship. For example, we often understand the role of education as central for socialising young people to become engaged and informed citizens. What roles do the schools or other sites of socialisation play in shaping sexual citizenship? This question leads back to the broader one that frames the book: ‘What is meant by (sexual) citizenship?’ Furthermore, since we all are sexual citizens, how do we produce analyses that capture the
complexity of our lives as it relates to sexuality? Clearly, addressing all relevant questions would lead to a much longer, and possibly unwieldy text. Fortunately, Diane Richardson has given us a powerful resource for understanding the diverse debates and interdisciplinary approaches to sexual citizenship that will enhance our ability to produce rich, in-depth critical analyses of the shifting local, international, and transnational contexts for the co-constitution of sexuality and citizenship.

© 2018 Nancy A. Naples
Board of Trustees Distinguished Professor of Sociology and Women’s, Gender, & Sexuality Studies, University of of Connecticut, USA