The Persistence of Gender Inequality 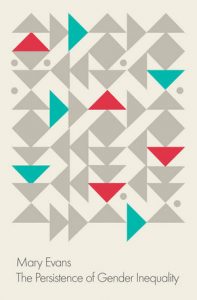 As the book jacket states, The Persistence of Gender Inequality is a ‘wide-ranging and elegantly written book’. It centres around two main areas of concern. The first is the focus of the initial section of the book, and relates to the inequalities of the old and new neo-liberal market economies, within which both persistent and emerging forms of gender inequality are located, though often ignored or concealed. The second is feminism, something which the author boldly suggests has had a part in sustaining the very social imbalances that lie behind gender inequality.

In her consideration of the interrelationship between gender inequality and the economy, the author contends that, contrary to what most accounts of the recent history of the Western world maintain, the position of women has not been dramatically transformed for the better. To counter the positive view that gender equality has been achieved in the ‘modern’ Western world, Mary Evans offers three arguments: women’s continued reliance on state support as evidence of the persistence of the structural disadvantages they endure; the emergence of new, and extreme, misogynistic use of social media; and the fact that undeniable improvements in the lives of women in the global North are often, and in different ways, gained at the expense of women in the global South. The role of care work is woven in various and sometimes surprising ways through this discussion and beyond, making clear that the main connection between the social inequality inherent in neo-liberal systems and gender inequalities is the persistence of the idea of the household as the foundation of society, and with that, the association between women and care.

Chapter 3 is particularly rich in unexpected intersections, from sexuality and sexualisation, to love and women’s presence in politics, with the discussion encompassing the social order and how neo-liberal politics shape human relations and continue to control them through women and their bodies; love, desire, agency, and the current xenophobic and racist trends in politics; finally arriving at the question of what type of feminism may or may not offer hope for real gender transformation.

The chapters covering the second theme are more challenging to read, as they implicate feminists and feminisms in the very problems they seek to eradicate.

Mary Evans begins with the clear reflection that feminism has been characterised by the ‘tendency of reassurance’ (p. 80), in other words, the way in which some feminists argue that feminism is about bringing about changes which are beneficial not only to women but also to men, and thus make feminism less threatening and more palatable to a broader range of people. To prove this point she gives, among others, the example of recent campaigns in the UK focusing on child and maternal health, which reinforce the idea that state support to women must be of benefit to others, in this case children.

Later, however, the author’s connections appear more fragmented, and it is unclear how certain conclusions are reached. For example, Chapter 4 is a history of feminism in the global North, aiming to highlight consistencies as well as dissent and disagreements. While the author states that she has identified two themes that have most united women in their campaign for equality, only one is discussed at length, while the second is lost (at least in the eyes of this reviewer) in the complexities of the discussion that follows. Even the reasoning relating to the first of the two themes – women’s desire to have the same level of civic status and autonomy as men (p. 93) – is not always easy to follow, though it arrives at the unambiguous conclusion that the history of women in both education and employment should be understood as the economy changing as gender expectations changed and not, as many feminists would have it, as being about overcoming resistance to women’s presence in either.

There are also too many numbered lists and sub-lists, often difficult to track, in this second section of the book. Closer to the end, however, the argument settles back into a pace and structure more amenable to being understood, if not always agreed with. This applies, for example, to the discussion of the current challenges encountered by feminism, especially in finding the right focus for its actions, given the shifts in the location of power away from national institutions, towards sites that are more elusive and invisible. This analysis includes reflections on the more problematic ways in which feminism has engaged with gender inequalities: the insufficient attention given to the intersections of gender with race and class; the criticisms of academic feminism; the complex implications of and reasons for the violent threats which social media subjects women to; the new challenge feminism faces in dealing with growing social inequality in the global North (to be addressed either by simply ‘adding women’, or by presenting gender inequality as something separate and unrelated); and the temptation of following the tendency that presents all social change as dramatic, and which prevents feminism from adopting a more sensitive understanding of trends.

The last chapter offers ideas on how enduring gender inequality can be fought: the main suggestion is that only through engaging with all forms of social inequality can we hope to redress gender imbalances. Mary Evans proposes that as part of this we need a much better understanding of how pervasive fantasies about women’s bodies contribute to shaping both current ‘material relations’ (p. 134) and gender inequality, and of the violent punishments meted out to women for even minor forms of subversion. She advises that we also need to be alert to the need to combat the exceptionalism and individualism typical of the current century.

In The Persistence of Gender Inequality, references are drawn from many disciplines and traditions, and arguments are presented through analyses of historical accounts, of ideas and theories, and of fictional characters and their lives. These contentions progress by logical links, but more often through unusual associations, and even paradoxes. At times, as the author recognises, propositions are not new, but they are presented from a different angle, or with an unexpected emphasis, and through juxtapositions that help the reader to re-think and deepen their understanding and position. For example, Mary Evans agrees that depicting women (especially women in the global South) as ‘victims’ is wrong and dangerous, but warns that highlighting their agency plays into the hands of an ‘empowerment’ narrative in which individuals can, on the one hand, possess useful new skills and capacities, but on the other, can be denied state support to which they have need and a right.

These are evident virtues of the book, which make it both an engaging and challenging volume. But this is not a book for relaxed or sporadic reading. Its arguments are not always easy to follow or summarise, because of the long chains of connections, and require considerable patience and concentration. All the same, these arguments, always insightful and exciting, make clear that gender inequality has not disappeared, and that indeed, we need to ‘start with the abandonment of fantasies about emancipation and progress’ (p. 138) in order to begin to truly redress gender inequalities.