Handbook on Gender and War 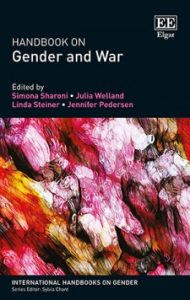 The Handbook on Gender and War is an important and very welcome collection of specially commissoned contributions, bringing together an impressive array of feminist scholarship on gender and war that communicates the existing body of literature in the field, and brings the debate upto-date with contemporary research and analysis. Every chapter is engaging and thought-provoking, whether offering sophisticated theoretical insights or fresh empirical research into areas including militarism and masculinities, security, gender mainstreaming, and sexual violence. The breadth of the topics included and the in-depth specialist knowledge of each contributor combine to make this volume a solid starting point for any student, scholar, or activist looking to delve into feminist theorising on violence, power, peace, security, and justice.

The book is divided into four parts, each one examining the ways gender operates in a distinct phase of war; opposition to war, the conduct of war, the impact of war, and the aftermath of war. Given the size of the volume (there are chapter contributions from 27 different authors), it is not within the scope of this review to comment on every single chapter; rather, I hope to give a general overview, with selected examples of novel conceptual ideas and empirical findings that particularly stand out.

The first part of the book, which looks at gender and the conduct of war, is made up of essays from experts addressing three interrelated themes: the enabling of war, the day-to-day operation of war, and understanding the conduct of war. In their respective chapters, Victoria Basham and Linda Åhäll demonstrate, using the example of the military’s exclusion of women from ‘front line’ combat in Victoria Basham’s case, and that of the portrayal of a female character from a Hollywood war blockbuster in Linda Åhäll’s, that the fighting of war continues to depend on a carefully constructed, masculinised identity of the armed forces. In her chapter, Julia Welland skilfully unpacks the complex workings of military masculinities and femininities, and their intersections with race and sexuality, in counterinsurgency policy and practice in Afghanistan, thereby demonstrating the important contribution that feminist theory can make to critical thinking on the War on Terror.

Part Two considers gender and the impact of war, and reveals the often hidden consequences of war, with a sharp focus on sexual violence. The authors in this section present the gendered impacts – economic, social, and personal – of conflict. It has long been acknowledged that men and women are affected differently by war, be it the destruction of infrastructure, the loss of employment, or access to health care. However, the research showcased in this section goes further, demonstrating the way gender shapes people’s experiences of war – ‘as fighters, as families of fighters, as weapons of fighters, as well as refugees and survivors’ (Linda Steiner, p. 169). Laura Sjoberg gives a detailed overview of ‘everyday’ lived violence of wartime – rape, prostitution, sex trafficking, domestic violence, and economic impacts – and argues that this violence against women is, to paraphrase Clauswitz, ‘gender politics by other means’ 1. This section also includes exciting new research on the dynamics of sex and gender in the treatment and portrayal of girl soldiers, women suicide bombers, and women war reporters, with important policy implications.

Part Three of the book concentrates on the relationship between gender and opposition to war. This is a particularly fascinating section of the book, as all of the chapters here draw on women’s direct experience of war or political violence. The authors pay close attention to the lived experiences of women in their multiple roles and identities, as victims, soldiers, instigators of violence, or activists for peace. Using case studies from six different contexts, including Iraq, Palestine/ Israel, Japan and Liberia, the contributions in this section provide penetrating insights into the complex and nuanced workings of gender in the opposition to war, militarism, and political violence, helping us to understand why some women choose to engage in anti-war or anti-violence organising. In her re-reading of feminist anti-militarism, Ilene Feinman confronts head-on the difficult task of placing two seemingly contradictory feminist agendas side-by-side – feminist arguments for females’ inclusion in the military and feminist critiques of militarism – and does so to bring attention to the need to think broadly about the way gender drives militarisation processes.

The final section of the book focuses on gender and the aftermath of war. The authors of these chapters examine the significance of gender within three overarching themes related to the cessation of fighting and what that means for the population; firstly, the changing definitions of peace, security, and justice; secondly, the demilitarisation and reintegration of soldiers; and thirdly, the opportunities and challenges faced by post-conflict societies. All the contributors, unlike many in the policymaking world, view war as a continuum, and recognise that ‘key issues persist after fighters put down their weapons and a truce is reached or a peace accord signed’ (Simona Sharoni, p. 461). The section begins with an overview of the academic literature on gender and peacebuilding by Laura Shepherd and Caitlin Hamilton, with the subsequent chapter by Megan Mackenzie exploring some of their identified themes through her critical examination of competing definitions of security within International Relations scholarship and also policymaking. Catherine O’Rourke’s piece on transitional justice also stands out as an example of cutting-edge research on a topic that is comparatively new and under-theorised by feminist scholars.

A real strength of this book is its incorporation of intersectional, transnational, and post-colonial feminist perspectives. Indeed, a recognition and active application of the need to take into account identifiers of difference other than gender, such as race, class, nationality, and sexuality (as well as other markers), permeates the book. As editor Linda Steiner says,

Gender is certainly not always more important than other dimensions of identity, nor are all impacts differentiated by sex/gender. So, gender should always be considered in relation to race, class and other relevant social categories … [I]ssues must be analyzed … not as independent but as interlinked systems. (p. 169)

It is difficult to find anything substantial to criticise in this impressive volume. However, given the international significance of United Nations Security Council Resolution (UNSCR) 1325 (on Women, Peace, and Security; WPS) to policy and practice in the world’s conflict zones, I would have liked to have seen more discussion on this important topic included in the collection. Certainly, many feminist scholars have tackled the issues surrounding UNSCR 1325 with academic rigour, and there is no dearth of scholarship in this area. Although Soumita Basu provides a useful overview of the development, adoption, and implementation of the WPS agenda in the United Nations, and its related UNSCRs (in particular UNSCR 1325), it would have added to the richness of the collection to have included at least one other alternative or critical perspective, for example, a post-colonial reading of UNSCR 1325 that problematises its underlying notions of race and sex, and/or a case study using original empirical research to demonstrate the workings of UNSCR 1325 in a particular conflict zone.

There is no doubt however, that the Handbook on Gender and War is an invaluable resource for scholars, academics, researchers, and educators in the disciplines of gender studies, international relations, development studies, and peace and conflict studies. This said, the content and style of the book is very accessible indeed, making it ideal for non-academics as well, including activists, policymakers, field workers, and gender practitioners.

1. Carl von Clausewitz, the 19th-century military theorist, famously contended that war is a continuation of politics by other means.