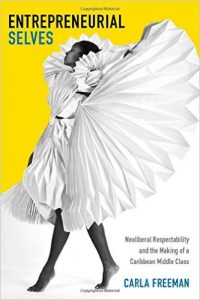 Much has been written about the impact of economic restructuring on the socio-economic and political situation of many countries throughout the world, and specifically on women, children and the poor. Carla Freeman’s book goes further and considers the cultural shifts as well as the psychological and spiritual transformations that have often accompanied the changes in political economy ushered in by the structural adjustment policies of the 1980s.

In the countries of the English-speaking Caribbean, the adoption of these policies by CARICOM (Caribbean Community) governments in 1984 marked a turning point away from the broadly state-led socio-economic development that characterised post-independence nation-building.

Jamaica’s experience was the most profound, and the most recorded, but other countries implemented these policies, even in the absence of a debt crisis. While the changes in Barbados – the focus of this book – are less easy to trace to a single event (such as the 1984 budget speech of the newly-elected prime minister of St.Vincent and the Grenadines) their consequences are, nevertheless, clearly visible in the lives of the women and men in Carla Freeman’s book.

From a Caribbean standpoint, Carla Freeman’s ethnography is a fascinating illustration of the paradigm shift that has taken place since the late 1980s, in the wake of the new policy framework of ‘structural adjustment’, now generalised as ‘neoliberalism’, with its signature elements of the retreat of the state from its post-colonial mission of nation-building (that required major public investments in education and health); the privatisation of state-controlled public goods like water and electricity; the removal of special provisions for the poor and the privileging of the ‘market’ over civil society, especially the undercutting of labour (the movement that led the way toward a more equitable society in this region).

For this reader who has lived in Barbados for the past 38 years, who came of age at a time when the newly-independent state had a strong role in nation-building (with its imperatives of establishing public services to support the creation of a middle class), and who has always focused on the political economy of globalisation from a Third World feminist perspective, the book explores a world barely recognisable from that of her youth.

The self as an entrepreneurial “project” under constant renovation is a key signpost of neoliberalism and its perpetual quest for flexibility in the changing global marketplace (p.1).

And it is this combination of economy and ‘affects’ (‘the embodied expressions of emotion and feelings’ (p.3)) – that makes the book unusual and compelling reading.

Carla Freeman paints a fascinating picture of what ‘self-making’ entails, with case studies of women (mostly) and men who have chosen to leave the security of work in the public and private (for example, banking) sectors to branch out to create their own businesses. The women have also left the ‘security’ of traditional marriages to form new ‘partnership’ relationships, often involving a new understanding of marriage, in which men engage in co-parenting as much as in the businesses created by themselves.

New lifestyles include participation in cultural, spiritual and self-help activities. In fact, an interesting feature of the enterprises created by these new entrepreneurs is that they are often services used by people like themselves: spas, fitness centres, counselling services and adventure programmes for children.

Of special interest is the ‘new’ spirituality to be found in non-traditional religions, referred to by Carla Freeman as “middle class churches”, often taking place in the open air as well as in living rooms. Carla Freeman sees these new churches, spiritual communities and forms of worship as

expressive of many of the markers of neoliberalism … in particular the injunction for individuals to ‘take charge’ of their own lives, embrace the challenge to invent and reinvent themselves in response to the insecure marketplace, to reflect inward and to examine themselves, and, in effect, become both entrepreneurs in the marketplace and entrepreneurs of themselves in more personal and intimate ways … offer(ing) lifestyle advice and counselling rooted not just in the spiritual domain, but in that of enterprise.” (pp. 191–192)

Carla Freeman recognises that many features of the ‘new’ entrepreneurial middle class are grounded in pre-existing, common cultural patterns of Caribbean life. These include the ‘porous boundaries of public and private, “work” and “life”’ (p.57). In this region, there has always been reliance on family for support and survival in economic enterprises as well as in social well-being. As Carla Freeman notes, in the Caribbean, it has very often been the case that ‘work is life and life is work’ (p. 133).

Most importantly, the majority of Caribbean working-class and economically disenfranchised women, and men, have always been forced to use entrepreneurial skills for survival – whether as higglers/market women, shop-keepers, seamstresses or owners of small businesses producing goods and services for people of their class. In these circumstances it would be fair to ask whether this ‘trend’ is actually new, a product of neoliberalism, or simply a reframing of these pre-existing livelihood strategies in a new, neo-liberal context – something that Carla Freeman does not really address. However, this point notwithstanding the author paints a compelling picture of “Barbados today”, a Barbados that is unrecognisable from the pre-1980s.

Carla Freeman’s thesis is that the flexibility of neoliberalism has restructured the global economy and facilitated the ingenuity, creativity and tenacity of entrepreneurs described in this book, and this is something I fully accept. However, questions remain. Can a new form of social organisation emerge from an economy based on small business with it precarious tax base? Indeed, is such an economy viable? What of the context that produces the neoliberal entrepreneurial phenomenon? Can these self-making “affects” be sustained on a long-term basis in the absence of predictable government revenues that serve as a base for the provision of a range of services (including those required to support entrepreneurship), or the sense of solidarity required in countries in which the majority are poor?

In my view, an economy oriented toward small business cannot support the creation of a coherent or sustainable society. A corollary of the individualism that is the hallmark of entrepreneurialism is the loss of a sense of community and public responsibility. Many Barbadians, from of all walks of life, have talked about the greed, corruption and lack of accountability seen to be pervasive at this time of on-going socio-economic decline following in the wake of the global economic crisis of 2008. Widespread economic insecurity has shaken the confidence of all sectors, and to many, government appears indifferent to the plight of its citizens. The contrast is all the greater when one considers the vision, the belief in the role of the state that informed the early years of self-government and independence.

The book is for an academic audience: its references to relevant scholarship and debates make it invaluable to those seeking to understand both the impact of neoliberalism as well as Barbadian/Caribbean society today. Nevertheless, with its fascinating and compelling case studies, its scope – linking economy with culture, and historic contexts – and story-telling style, it is an easy and enjoyable read.

This book should be read not only by development scholars, practitioners and activists and policy makers, but especially by those interested in learning more about Caribbean society today.