Women and Civil Society in Turkey:
Women’s Movements in a Muslim Society 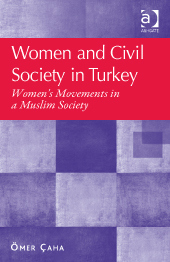 Women and Civil Society in Turkey: Women’s Movements in a Muslim Society provides an overview of the basic literature on the development of feminism in the West, and its history in Turkey. Although the material covered will not be new to anyone familiar with the literature on feminism and its development in Turkey, it is certainly useful to have a book that pulls together all the relevant scholarship, and the book is a valuable resource for students of woman’s studies who are interested in Turkey. In Women and Civil Society in Turkey, Ömer Çaha argues that women’s movements have made a substantial contribution to the development of a lively civil society in Turkey.

He claims that civil society in Turkey was rather undeveloped during the period following the establishment of modern Turkey under Kemal Ataturk in 1923, up until the liberalisation that took place post-1980. Underlying this argument is the assumption that a heterogeneous civil society with diverse demands leads to democratisation because it provides the kind of enabling environment in which people learn to organise, form collective interests and group consciousness, check the power of the state, and prevent its authoritative decisions. In the spirit of the literature on new social movements, which emphasises the role of civil society and identity politics, Ömer Çaha believes that not only feminists, but environmentalists, ethnic, and religious activists also contribute to the emergence of a plural public sphere.

The book starts with a discussion of the development of “male-centered” modern Western political thought, critiquing the perception of civil society as a homogenous entity – as characterised by philosophers such as Hobbes, Rousseau, and Hegel – and pointing out the substantial role of women and their movements in the creation of an active civil society and democracy. The author then puts forward his argument on how Ottoman rulers and Kemalist leaders considered women’s education and their visibility in the public sphere as a medium for the state’s modernisation agenda, although not concerned with women’s rights and emancipation as such.

Ömer Çaha also writes about the emergence of an indigenous feminist movement that struggled for women’s social and economic as well as political rights in the Second Constitutional era (1908–1918). The movement was successful in gaining enfranchisement rights for women in the 1930s. However, it was subsequently suppressed, and Turkish women merely served to further Kemalist ideals and principles while having no voice until the 1980s. It is not very clear from the text how such a lively and successful indigenous movement was suppressed and broken up so easily.

From 1980 onwards, the women’s movement established its independence from the state and worked to expose the patriarchal character of the Kemalist regime, which used women as a symbol of the modernisation of the country. Ömer Çaha is informative on the feminist publications that proliferated in this period, and describes the different views of liberal, radical, and socialist feminists. The feminist movement which started in the streets, Ömer Çaha argues, became more established with the creation of institutions dealing with women’s problems.

For me, the later chapters in the book, in which Ömer Çaha discusses the development of ‘Islamic’ and ‘Kurdish’ movements, prove to be more interesting, although the reader might expect to see more detailed research and discussion on ‘Islamic feminism’ here, as the subtitle of the book, ‘women’s movements in a Muslim society’, raises this as an expectation. Nevertheless, Ömer Çaha’s analysis of the Kurdish women’s movement and the examination of the magazines published by Kurdish feminists such as Roza, Jujin, and Jin û Jiyan should be considered an important contribution to the field.

The author argues that Kurdish feminism developed in response to the views of both Kurdish men and Turkish feminists. According to Kurdish women, both have ignored the additional oppression Kurdish women experience because of their ethnic identity. Ömer Çaha points out the similarities between the criticisms raised by the black women’s movement and third-wave feminism of white Western middle-class women, and Kurdish feminism’s challenge to a feminist understanding that sees all women in Turkey as sharing common problems. He substantiates his argument with references to the magazines examined for the study.

However, we should take into account that the references in question are from the 1990s and much has changed since then. In 2015, it would be a generalisation and an unjustified accusation to say that feminists in Turkey ignore the different forms of oppression Kurdish women experience because of their ethnic identity. Where I do find the book’s contribution especially valuable is in the opportunity it gives us to read Kurdish women’s experiences of forced migration, rape, and torture during the conflict between Turkish forces and Kurdish fighters and while in custody. We are also made aware of Kurdish women’s concerns about and protests against the assimilation policies of the state through language, education, and state institutions like Multi-Purpose Social Centers (CATOM), where training for income-generating employment opportunities are offered.

In Women and Civil Society in Turkey, Ömer Çaha interprets the history of modern Turkey from within the dominant paradigm of Turkish political and social sciences. According to this reading, the ruling elite, consisting of a group of Kemalist intellectuals, bureaucrats, and military officials, has feared and therefore prevented political and social diversity, believing that it would undermine commitment to common interest. The ruling elite’s simplistic understanding of modernisation has led to a unitary public domain and hampered democracy.

That the process could be reversed only after 1980 was thanks to liberal-minded leaders like Turgut Ozal and, currently, the cadres of the ruling party AKP, who are more tolerant of diversity and a heterogeneous civil society. Such a reading of the history of modern Turkey, coupled with the assumption that a plural civil society leads to democratisation, have led many social scientists, including the author of this book, to expect a more democratic Turkey in the 2000s.

Unfortunately, it has become evident in the third term in office of the AKP that this expectation will not be realised. This fact brings one to question the usefulness of reading Turkish history through these lenses. It has become clear that the problem with Turkish democracy is not limited to the centralising policies of the Kemalist cadres. As Ömer Çaha amply demonstrates, the Turkish public sphere has become more plural, civil society accommodates more diverse groups, and the Kemalist legacy that privileges the secular elite culture of the rulers has been dissolved. However, the result has not been a more democratic state.

The authoritarian character of the Kemalist regime seems to be more resilient than previously assumed. Although it is clear that the intention of the book is not to develop theories of democratisation, the fact that it strongly embraces the standard interpretation of Turkish social and political sciences leads one to question its relevance.

At this stage of Turkish history, the country has a vibrant civil society, in which women’s voices from across the political spectrum are a part. In fact, women have been vocal not only on issues such as violence against women and the right to abortion, but also in demanding peace between the state and the Kurdish movement. However, we have yet to see how this will translate into a more democratic country.

Women and Civil Society in Turkey: Women’s Movements in a Muslim Society is published by Ashgate.
Review originally published in Gender & Development 23.1 (2015)