Gender Perspectives and Gender Impacts of the Global Economic Crisis 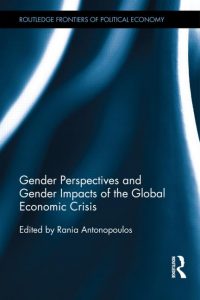 This is a timely book. Whereas gender analyses of the Asian financial crisis of 1997 only appeared many years later, and were rather ad hoc, this book presents an important collection of analyses of the gendered impact of the crisis and its policy responses while we are still experiencing the effects. It includes all the current debates on the social effects of the 2008 global financial crisis, and it is precisely what is needed now, even though we are still in the middle of events, and assessments can only be preliminary and partial. The editor and the authors do not pretend that this is the last word on it. They should be applauded for their efforts to present an overview now, rather than waiting for the dust to settle, too late for shifts in policies.

The edited volume contains ten chapters, written by a wide diversity of authors, women and men, most of them based in the developing world. There is a good balance of topics, ranging from the macro level – looking at global employment trends, a review of macroeconomic policies, and several trade analyses – to the micro level, with assessments of country-level labour market effects, and the impact on social care. The introductory chapter, by Rania Antonopoulos, sketches out the context in which the crisis hit the developing world. Two phenomena stand out. Firstly, the developing world was much more linked to developed economies as compared to previous crises, which resulted in an amplified negative effect on exports. Secondly, various developing countries had managed to develop budget surpluses in the years before the crisis, which allowed them to introduce generous fiscal stimulus packages.

As a consequence, the developing world was largely affected through trade, not bank balances, and was able to respond quickly and effectively. The European Union only began recovering in 2013, whereas most developing countries had already attained positive economic growth by around 2010.

The rest of the book’s chapters show that despite these advantageous macroeconomic conditions, the global financial crisis has had a gendered impact which, on balance, has been more negative for women than for men. In particular, the reduced gender gaps in labour markets worldwide that could be seen up until 2007 have reversed since 2008. The explanations range from resilient patriarchal structures in labour markets, with segmentation along gender lines and continued wage discrimination, to gender-blind social policies. However, two positive examples stand out, described in the chapter by Jayati Ghosh: Sweden and Argentina.

In Sweden, after the early 1990s crisis, there was a currency devaluation, increased government expenditures, and social welfare measures targeting women’s unpaid care work, all contributing to a quick recovery.

In Argentina, it was a higher minimum wage, more labour inspection, higher social security contributions, and more child allowances that helped Argentina to recover from its 2001 crisis with much lower levels of inequality and lower gender gaps.

The chapter on social care in the USA, by Rania Antonopoulos, Hijong Kim, Tom Masterson, and Ajit Zacharias, presents another possible pathway out of a crisis, which at the same time stimulates employment and gender equality. Their proposal is to invest in the social care sector, rather than in infrastructure, because as a sector it is more labour-intensive, with the majority of workers being women, often from disadvantaged groups, and working for the lowest wage levels.

The chapter on macroeconomic response policies in Latin America shows that, as in the USA, it has been men’s jobs that have been cut the most as a result of the crisis. What is also interesting in this chapter is the case study on Argentina. Whereas Jayati Ghosh’s chapter reviews the response to the crisis of 2001, Valeria Esquivel and Corina Rodríguez Enríquez focus on the 2008 crisis, and are less optimistic about the social and gendered effects of the recovery policies.

The chapter on China, by Yan Liang and Sara Hsu, shows that the stimulus package was actually pro-female, at least in some areas, for example, through health benefits, which not only directly improved women’s and men’s health but also relieved women’s burden as unpaid caregivers. In this way, China has set an example for recovery policies in the USA and the EU.

The chapter on Turkey finds a clear but relatively small added-worker effect among women, who moved from being full-time home-makers to participants in the labour force. The effect is estimated to be between 8 and 10 per cent, whereas in some European countries it is more than double that. The explanation given by the authors, Serkan Değirmenci and İpek İlkkaracan, for this difference is the strong traditional, patriarchal structure in Turkey, which prevents women seeking paid employment. The strengths of the volume are, in my view, twofold. Firstly, they lie in its broad coverage of countries and relevant topics, and secondly, in its use of recent data from a wide variety of sources.

The depth of the gender analysis is, unfortunately, varied. Some chapters do not use a gender analysis at all, but merely compare the position of women and men. Other chapters do refer to gendered institutions, structures, and policies in an explanation of different outcomes for women and men, and possible reversals of these outcomes over time. The book does not start from a shared analytical framework. This is not necessarily a problem, but such a framework would have helped to achieve at least a minimum depth of gender analysis in every chapter. As a result, the reader is left with questions as to whether the crisis response policies indicate progress in gender mainstreaming or not, and whether the crisis itself has helped to shake up patriarchal structures, or only brought shallow and temporary relative improvements for women.

All good research should raise new research questions. The fact that this book triggers such questions is in itself a confirmation of the quality of the research. I recommend this book to everybody who is interested in the gendered impact of the crisis, as well as to those who are looking for feasible, macroeconomic policy options to address crises in ways which reduce gender inequalities, as well as other social inequalities.

Gender Perspectives and Gender Impacts of the Global Economic Crisis  is published by Routledge.
Review originally published in Gender & Development 23.1 (2015).