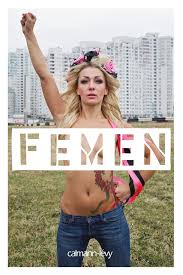 Founded in Ukraine in 2008, Femen is a feminist activist group arguably most famous for the bare-breasted protests carried out by its members. I approached this book about the group with a degree of unease, perhaps because it is hard to categorise. Is it a biographical account of the lives and struggles of ‘four young women of extraordinary courage’ (p. XX)? A feminist manifesto? A snapshot of part of an intense period of Ukraine’s history? The book is none of these things, and a bit of each. Above all, it is a book that surprises, challenges, and at times can seriously annoy.

One of the positive qualities of the book is that the four core Femen activists are its protagonists, and their voices, individual or collective, speak loud, if not always clear. These voices are at their most effective and genuine in Part 1 of the book, where each activist introduces herself, and we read of their experiences of adolescent boredom in the provincial town of Khmelnytskyi, their discovery of Marxism and, through Marxism, of women’s rights. These accounts are fresh and spontaneous. Anna’s Soviet childhood is happy: ‘I remember hazelnut ice cream, fresh tomato juice, tangerines, chocolate and snow’ (p. 14). Oksana is as passionate in her Christian faith as she is in her rebellion against it. The women’s accounts remain candid both when they talk of themselves and their families, and when they reflect on the momentous period of the ‘Orange Revolution’ and beyond (as in the account by Inna). Above all, the first-person stories highlight the sheer naïvety and sincerity of these four young women in their belief that truly everything was possible.

In Part 2 of the book, Femen as a collective describes the nature and evolution of its actions. The actions, plainly narrated, are marked by audacity, creativity, physical prowess (non-violent but aggressive, as the book states) and personal courage. They also appear frighteningly random and flawed, especially in terms of the choice of targets and positions, both in Ukraine and Russia and, even more so, in France and other countries.

Perhaps this is due to the fact that the group ‘put feminism into practice, then we consider the theoretical framework of our actions’ (p. 81). This appears to refer particularly to the topless protests which, with the crown of flowers, became the hallmark of Femen. There is certainly resonance between such a statement and the fact that Femen is so ‘open to the media’, that it puts form ahead of content (p. 86), and that it considers itself 50 per cent a feminist organisation and the other 50 per cent an organisation engaged in ‘artistic actionism’ (p. xix).

But beyond art, creativity, and undeniable courage, statements and positions are far less coherent and convincing. ‘Sextremism’ (the sexualised form of activism used by Femen) may offer powerful ways of provoking and shaking patriarchal thinking, but what does it mean when the weight and body shape of one of the activists are considered ‘not fitting the Femen image’ (p. 107). Is it just naïve or something worse for Femen to be surprised that in France feminist participants in the debate on the niqab held different opinions from theirs? (p. 134). What is the theoretical framework behind the statement that ‘Saudis beat their women and limit their freedom because Sharia governs Saudi social life, because Islam is the state religion’ (p. 157)? Or behind the idea that ‘Femen-Legionnaires, trained in Paris, will start the feminine revolution across the planet’ (p. 163). It is in this context of lack of coherence and poor judgement that one can understand the dubious choices made when accepting sponsors and financial support, for example from Jed Sunden, the media mogul, and later from the sale of ‘breastographs’, of which they ‘don’t know what use people make’ (p. 153).

There is another contributor to the book – Galia Ackerman – who helped put the book together. The introduction she provides gives a valuable summary of the emergence and actions of the group, and of their significance in the historical context of both Ukraine and Russia, and the notes to the text are helpful. In both, her voice is muted, the tone objective. In the afterword, written a year after finishing the book, we feel more personal engagement from her as she comments on the evolution of the group and its activities. More specifically, she reflects on the sad fact that what a few months before looked like a movement capable of representing ‘the beginning of a global feminist revolution’ (p. xxii), now appears to be reaching its end. Galia acknowledges that Femen’s more recent ‘unwise moves’ (p. 168) (mostly against the established religions), are receiving negative reactions, even from traditional supporters. Splits and dissolutions are occurring between the original group and the French and Brazilian branches. Femen activists suffer from physical attacks, and internally, seem riven by controversy over the role of their old mentor, Viktor Svyatski, and by the way in which film makers and the media in general are treating them.

She attributes such problems and setbacks to Femen’s lack of understanding of the complexities of Western societies, to their being ill advised, and to bad luck. What is surprising is that, despite her closeness to the group and perhaps because of her loyalty to it, she had not envisaged that perhaps these contradictions were an integral part of its approach from the start.