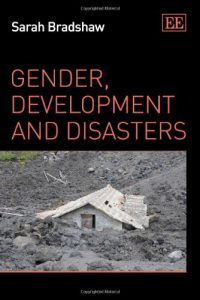 Further, she contends that the concept of gender within development needs re-examining, asserting that work on gender in the development sector is still primarily instrumentalist in nature, concerned more with what women can do for development, rather than with women’s fundamental rights and issues of equality.

The book opens with two chapters that explore what we mean by the terms ‘disaster’ and ‘development’ – a pertinent reminder that these terms are subjective according to person, time, and place. In particular, Sarah Bradshaw’s proposition that we should view a disaster as the result of a population being unable to withstand, respond to, and recover from a ‘natural hazard’ is an eminently useful and important definition. What is more, the author argues that we must not look at disasters as events that ‘break the pattern of development’; the relationship can be much more reciprocal – disasters can be linked to, or be products of, development processes.

Chapter Three examines how understandings of gender more widely have influenced thinking on development and disasters. It is here that we are shown just how significantly gender has been left out of work on disasters in recent decades, to the extent that it is now lagging behind development. Interestingly, however, though the engendering of disasters has been slow to develop, Sarah Bradshaw notes that what has advanced more quickly is women’s inclusion in post-disaster activities. Chapters Four to Six explore disaster response in the relief and recovery periods, and the inclusion or exclusion of women and gender analysis within them. From the moment a disaster strikes, the response, consciously or not, is gendered, and how a response is understood is gendered. Failure to acknowledge this, and to try to ensure a gender-equitable approach, threatens any possiblility of an effective response. Chapter Five details the complexities involved in humanitarian assistance in the relief period. This assistance is often gendered: ‘women are often constructed as blameless victims, as protectors (of children), or as needing protection (from men)’ (p. 99). The lack of women’s agency that this implies, and the power dynamic it potentially reinforces, has long-term implications for men and owmen’s material and emotional well-being.

Chapter Six looks at the reconstruction period following a disaster, and Sarah Bradshaw demonstrates where we can find the best opportunity for working towards gender equality in these contexts. She illustrates, through case studies such as Hurricanes Mitch and Katrina, the ‘window of opportunity’ that follows such an event. That the physical environment is severely affected needs no explaining, but the impact on the political, social, and economic environment is just as significant, and offers a real chance for social transformation. That is, pre-existing gender inequalities can be addressed post-disaster, and potentially transformed, when a society is given the chance to reconstruct (or construct for the first time) the political, economic, and social structures that it wants. The possibility of effecting real change within the reconstruction period is questioned, however. Initiatives such as direct cash transfers, a new house that is put in their name, and so on, can empower individual women, but ultimately this might not be enough to transform power structures. ‘Strategic’ rather than practical gender projects are needed, and it is this distinction from Sarah Bradshaw that highlights the difficulties for both international actors and national governments. Such transformative work needs buy-in from all relevant parties, otherwise gender roles might change, but this might be temporary, and might fail to challenge power relations.

In Chapter Seven, Sarah Bradshaw addresses a very interesting aspectof disasters and disaster response – the ‘secondary disaster’. Here she argues that the initial disaster can give rise to a negative psycho-social impact, which can include gender-based violence. The disaster does not cause the violence, but causes conditions conducive to violence. Thus, any response to a disaster that does not recognise this could have very serious consequences for women. The secondary disaster case studies highlight that in order to address the impact of disaster, individual responses are often not enough, and a collective effort is needed to promote and establish rights. This collective action may prove key in transforming gender relations, and in Chapter Eight Sarah Bradshaw analyses the role of governments, international actors, and civil society, and the difficulties that such ‘participation’ can have in disasters. Finally, Chapter Nine looks at Disaster Risk Reduction as the first and last stages of the disaster cycle, but where a gendered approach is critically lacking. The development of the Hyogo Framework for Action (an international ten-year plan to build resilience to natural disasters) and the Millennium Development Goals, though addressing gender in a development context, have failed to address it within the context of disasters. This, along with the lack of financial backing, means that the scope for engendering disaster response within this global institutional framework is badly impeded.

Sarah Bradshaw’s book asks more questions than it answers, but it is clear that such interrogation is desperately needed if we are to have disaster responses and development programmes that truly and wholly incorporate a gender perspective. This book implores us to be gender reflective at every level. For those of us working in disaster response, we need to learn from development’s positive and negative practices regarding gender, rather than simply lifting gender debates out of development and inserting them into a disaster context – if nothing else, it assumes that gender in development is working. It is a difficult but vital truth: we still aren’t getting gender right. This book offers a real chance for us to reflect, and to change.