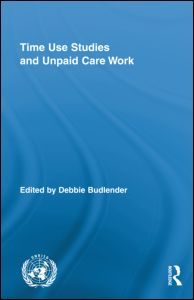 Unpaid care work is receiving increasing attention in high-level development policy discussions, significantly in the reports of the UN Special Rapporteur on the Right to Food and the UN Special Rapporteur on Extreme Poverty and Human Rights (1). Nevertheless, care continues to be overlooked or minimised in development practice and policy advocacy. One of the reasons cited for the inattention to unpaid care in development is lack of knowledge of large-scale, representative evidence on care in developing countries. Considerable small-scale and qualitative research has documented the extent of housework and care of persons. However, national-level time-use studies that include unpaid care work have been more common in developed countries, only beginning in a few developing countries in the late 1990s.

This book – a paperback version of the original, 2010 hardback – draws from the United Nations Research Institute for Social Development (UNRISD) project on Political and Social Economy of Care (2). It successfully fulfils its stated intention of making analysis and evidence on time use and unpaid care – especially from developing countries – available, and useful for policy. The book also explores extremely well the significant variation in unpaid care work by gender, class, race, location (urban and rural) and household-type, demonstrating the need for development responses to be based on a context-specific analysis. The contributors used a common analysis across seven cases – India and South Korea for Asia, South Africa and Tanzania for Africa, Nicaragua and Argentina for Latin America, and Japan – facilitating comparisons across countries.

For the lay reader, editor Debbie Budlender’s first chapter briefly reviews the concepts and debates around care and time-use studies. Unpaid care work activities are divided into three categories: (direct) care of persons, the unpaid housework that enables caring for people – such as preparing meals, cleaning, washing and shopping – and ‘volunteer’ community services. Unpaid care work is distinguished from unpaid agricultural production, due to the System of National Accounts (SNA) 1993 change to the definition of ‘work’to include unpaid work which produces goods, and collection of fuel and water. However, unpaid services for a household’s own use are still excluded from GDP calculations. Thus it is critical to measure unpaid care ‘services’, and estimate their value in relation to GDP. The SNA has now recognised unpaid care work in what is referred to as ‘extended-SNA’, defined as ‘work’ and distinguished from non-productive activities, which are thus limited to sleeping, socialising, studying, and getting dressed (self-care).

The first chapter also explains the main methodological issues and debates related to unpaid care work. For example, a commonly asked question is ‘why measure care in hours rather than imputed monetary value?’ Firstly, as Debbie Budlender points out, because many advocates reject reducing the value of care to its monetary equivalent. Secondly, because, as Debbie Budlender demonstrates, calculations of monetary value for unpaid care work are complex and controversial. The hourly earnings of an hour of unpaid care could be based on the average national wage, the actual wages for that individual, the wages of a generalist domestic worker, or the average wages of a specialist nanny or nurse. As a result, the estimates of unpaid care work as a percentage of GDP range from seven per cent to 63 per cent. Thirdly, time use studies measuring hours, instead of controversially calculated monetary value, highlight the issues of poverty and inequality: for example, women in India with a child under six are found to spend 6-7 hours a day on unpaid care, while men with small children only 1.2 hours.

As this chapter makes clear, time use studies methodology is also complex, and includes debates over categories of unpaid care work, age-group categories, types of households and also about simultaneous activities: for example, women may work in a small business and supervise a child or grandparent. Evidence on simultaneous activities is pertinent for development interventions; evidence only about ‘primary’ activities does not clarify why women entrepreneurs might have lower productivity, develop fewer marketing strategies or demonstrate less mobility. Yet evolving beliefs may influence how adults classify activities: for respondents who value childcare more, this may be the ‘primary’activity, while for other adults it is ‘secondary’or not reported at all. Furthermore, as Debbie Budlender explains there is the importance of distinguishing between whole population groups – all young men – and ‘actors’ – young fathers who ‘participate’ in unpaid care work. The former group would have a lower mean number of hours of ‘care for people’ than the latter. Specialist researchers will be interested in other analyses discussed, such as the ‘Tobit estimations’ of factors beyond gender that influence the time spent on unpaid care work, and the ‘care dependency ratio’ which revises the more commonly used ‘financial dependency ratio’.

Debbie Budlender concludes on gender inequality in unpaid care work: “women tend to spend substantially more time than men on both household maintenance and care of persons across all countries” (p. 21). This finding is significant, though some readers may consider it unsurprising, because ‘common sense’ has finally been backed up by rigorous evidence. The details behind this average are also fascinating. For example the gap between men and women in care of persons is relatively small in Argentina, very large in India, where men do only a tenth of the housework of women, and inconsistent in South Africa where men do 35 per cent of the housework that women do, but only a tenth of the ‘person care’. Diverse family composition and lower marriage rates explain the differences in this case.

My exploration through the subsequent country case studies in the book, with their many pages of findings about care given by young women as opposed to young men, households with and without children, and the significant caring roles of a few older men, led to a realisation. The gender difference in unpaid care work is not an absolute or universal one; some men do significant unpaid care work,- especially men in households with young children, and some girls and women – in certain periods of their lives – do very little. Instead, the gender inequality is cumulative over girls and women’s lives; ‘small’differences of less an hour per day totalled over decades add up to disadvantage in public life, especially when added to large gender inequalities in critical periods of the life cycle, such as when children are young.

Some development pracitioners and researchers will be interested in the methodological debates, the innovations in analysis, and rigorous evidence, especially those working in the countries profiled. Yet readers won’t find simple conclusions or policy recommendations – which was not the intention of the editor or contributors. The book is a complex read, and I missed having a short conclusion after the country chapters, to draw out the main findings and to highlight the countries; variations and fascinating examples. However, this book provides a rich and well-grounded understanding of unpaid care work in developing countries which has been missing from the literature. It is an invaluable base for development programme design and advocacy strategies.