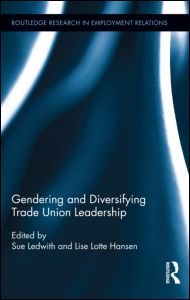 This collection of studies on the multiple challenges trade unions face in overcoming gender inequalities in their leadership, bargaining agendas, and general culture makes for fascinating, if at times depressing, reading. The book largely focuses on Europe, the USA, and Australia, with only one study from a developing country, Ghana. In that context, the editors argue that while trade union members are increasingly female and from migrant or minority ethnic backgrounds, the concept of what makes a good trade union leader continues to be a strong white male, because of the gendered structures and cultures of trade unions. For example, even in countries where women now make up over 50 per cent of the membership, such as the UK, women remain under-represented in leadership roles.

These studies seek to examine the nature of the barriers for women taking up leadership roles in trade unions, and what policies and programmes are in place to achieve greater gender equality. The authors, in large-part feminist academics and labour educators, use a variety of methodological approaches, within a framework described by the editors as an inter-disciplinary approach of gender and diversity, industrial relations and labour studies. The authors examine different ways of conceptualising leadership, such as the ‘transactional’, ‘transformative’, ‘oligarchic’, and ‘post-heroic’ models, and consider the extent to which hierarchical organisational structures and informal practices reinforce gendered inequalities. They examine the nature of union democracy and the relationship between leaders and members, between representative democracy and its ‘oligarchic tendencies’ (p. 12) and consider how women can internalise stereotypically male notions of what a leader is, and whether there are indeed different male/female styles of leadership.

The majority of the studies are based on sample surveys, combined with in-depth interviews, some carried out in the context of leadership training programmes. There are detailed studies of the gender policies of the German service-sector union, ver.di, the Confédération française démocratique du travail (CFDT) in France; and the Belgian trade union confederations, all of which have created specific structures for women and implemented gender quotas. The studies provide intelligent insights into how culture and complex political factions and groups combine to create barriers to change.

The study of a woman shop steward in Finland is particularly poignant. Based on interviews conducted over a five-year period as part of a five-year research project, it charts the story of a single mother, Alice, who was a sewing machinist in a middle-sized company in a small town in Finland. Elected shop-steward, she successfully campaigned to save the factory from closure, lobbying her municipal council, Parliament, and government ministries, as well as developing an effective media campaign. However, instead of rising to a leadership position in the union, internal political divisions within the union meant she was not supported by the union ‘boys’. They supported another woman, Chris, who ran a negative and divisive campaign, and won the next shop-steward elections. Alice was made redundant at the age of 50.

A more encouraging study looks at new organising initiatives among low-waged women, mainly women of colour and immigrants, in child care, domestic work, home care, and service occupations in New York. These organising campaigns have been inspired by concepts of community unionism, based on a social justice organising model. In contrast to the traditional union drives run by professional, often male, organisers sent by the union’s hierarchy, these campaigns were run by women organisers, with the aim of developing new leaders among the excluded workers. The United Federation of Teachers worked in alliance with ACORN, a local community organisation to organise and gain collective bargaining rights for the approximately 60,000 home-based child-care providers. The Domestic Workers Union campaigned to establish a new Bill of Rights, setting out basic standards for over 200,000 domestic workers. Their success was to address ‘whole life’ issues, to support formal and informal mentoring, to encourage women workers to assume leadership roles, and to provide flexible options for involvement. In that way, a union becomes less hierarchical and a more open space, willing to partner with community organisations. While this study is full of insights, it left some questions unanswered. Where was the decision made to carry out these campaigns in the first place, and how were they funded? Were such initiatives due to women reaching senior leadership positions in the mainstream labour unions?

These studies examine gender and diversity in the context of a declining overall union membership. They might have been usefully complemented with more studies from the emerging economies, and from (those few) countries where trade union membership is growing. In the context of fast economic growth and rising trade union membership, and in some cases, with governments with clear social justice and equality agendas, how have the trade unions responded and how successful have they been in integrating women and diverse groups into leadership and changing the bargaining agendas?

Another important focus is the role of the global union federations in promoting equality and diversity issues. Particularly in the context of the unions in developing countries, global unions have actively pursued equality goals, women’s leadership training programmes, and gender mainstreaming policies. Finally, it might also have been helpful to compare the organisational structures, working methods, and gender and diversity profiles of the leadership of social movements and trade unions. Are there lessons for the unions as they seek to organise and protect the rights of an increasingly precarious and fragmented workforce? Union renewal must embrace gender and diversity concerns but above all reach out to motivate, not alienate young workers, both male and female.

Gendering and Diversifying Trade Union Leadership is published by Routledge