Aid, NGOs and the Realities of Women’s Lives:
A Perfect Storm 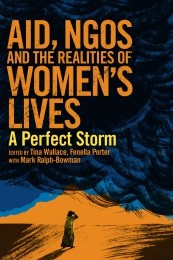 This book is a heartfelt cry of dissent. The editors and contributors, development practitioners and academics, express and illustrate their concern that currently, dominant systems for managing aid disclocate development programmes from the realities of poor peoples’ lives and from poor women’s lives in particular, and fails to recognise the complexity and messiness of social and institutional change. The editors, Tina Wallace and Fenella Porter, elaborate the ways in which they perceive that ‘private-sector approaches’ and ‘managerialist thinking’ are increasingly dominant in all sectors of the aid industry, manifested in requirements for quantitative results frameworks with pre-planned targets, linear cause and effect theories of change, and demonstrations of value for money.

They document a ‘perfect storm’ of donor language and thinking on results and value for money, the increased role and influence of private-sector players, and the competitive desire of many international non-government organisations (INGOs) to grow in influence, and the way this is shifting INGO practice away from its traditional core focus on the needs of poor and vulnerable women and men. These new ways of working are, they argue, silencing the voices and realities of the poor, as well as those of many NGO partners in Africa, Asia, and Latin America.

The first half of the book focuses on examples of this in the thinking, policy, and practice of development organisations. Suzanne Walker, for example, documents ways in which desire for big funding is taking over as the primary driving force in many INGOs, with some beginning ‘to more closely resemble businesses in pursuit of maximising profit than non-profit organisations in pursuit of justice and inequality’ (p. 69). The crux of the problem, she suggests, is the willingness of INGOs to allow their values, as well as what they know about the complex realities of working to bring about change in poor peoples’ lives, to be compromised by focusing attention on donor requirements for the sake of acquiring funding.

In another example, Anastasiya Hozyainova reflects on donor-supported work to mainstream gender in Afghanistan – and the minimal achievements in progressing women’s rights despite strong international commitment and funding. She reflects on the ways in which the donor focus on short-term results, policies, and legal frameworks, achieved largely through out-sourcing work to international consultants and importing foreign frameworks, limited dialogue with Afghan women and deep understanding of the Afghan context. The approach taken gave no space for the Ministry for Women’s Affairs to take responsibility themselves, to make mistakes and learn. The article raises important questions about how significant social and cultural change comes about, and the role of donors in supporting it.

The second half of the book turns to examine an alternative way of working, which starts from the bottom-up, with the authors sharing positive experiences of working with women to bring about change in their own lives. Contributors describe community-level initiatives that are making a difference. Many of these are coming up against the kind of managerialist thinking elaborated in the first half of the book, frustrated by donor demands for value for money in terms of lower unit costs, for quantifiable short-term markets and results, and for impact at scale. Authors describe their struggles in this context to communicate, justify, and gain much needed financial support for what they know to be working.

The postscript focuses frustration with INGOs that are going along with these new ways of working – even to the point of silencing internal debate and dissent – when, drawing on their traditional commitment to transformative change, their experience, history, and influence, they should be leading the fight against them. The book concludes with a plea to readers to express dissent about forms of aid that are not working, and to engage in debate about ways of refocusing development on listening to poor women and men, recognising the complexity and uncertainty of change, and progressing through learning and reflection.

From my perspective as a gender and social development consultant currently mainly working with donor-funded civil society governance programmes in Africa, the concerns raised in this book are real and serious. I fully recognise the approaches described in the first half of the book, and the kind of frustrating encounters between projects making genuine headway with ‘real-life’ challenges coming up against rigid and seemingly inappropriate donor requirements set out in the second half. I am familiar with the ways in which heavy-handed application of Results Framework logic and pre-planned targets can all too easily create a parallel universe of measureable activity which satisfies donor requirements, but is dislocated from the realities of peoples’ lives and meaningful processes of change.

My experience is that the causes of this situation are more complex and nuanced, and that there is a higher level of debate within donor organisations about these challenges than this book suggests. The focus on results and value for money is not just about the increasing influence of the private sector. It is about seeking to ensure and demonstrate the effectiveness and impact of aid, a legitimate concern in its own right, and a political imperative in the current UK context of a highly contested increase in the government aid budget. The challenge is that many of the processes of social and institutional change that make a difference to poor women are neither tangible nor predictable, and they involve all kinds of risk. The simple availability of funding, as well as unsophisticated use of results frameworks and pre-planned quantitative targets, all too easily distorts incentives for engagement and lines of accountability, and undermines the very processes of change it is seeking to support.

It is heartening to see these concerns brought out into the open, and encouraging to feel that this may contribute to greater debate on how aid money can most effectively support processes of social and institutional change that make a genuine and lasting difference to poor women’s lives, and how we can ensure and demonstrate that aid money is well spent in this context.

Aid, NGOs and the Realities of Women’s Lives: A Perfect Storm is published by Practical Action Publishing