The Women of Katrina:
How Gender, Race, and Class Matter in an American Disaster 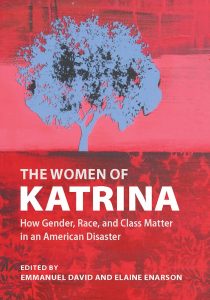 This edited collection is a welcome edition to the small but growing gendered literature around ‘disasters’. While its focus is on the Gulf Coast region of the United States where Hurricane Katrina made landfall in August 2005, and as such focuses on a country of the ‘developed’ world, it has much to say about processes of underdevelopment , inequality, and social exclusion. It also offers insight into the resilience of those with limited resources to call upon in times of crisis and their strategies for coping. As such, those working in ‘development’ should not see the title of the book.

The focus is not only on women and making women’s voices heard, but ensuring the diversity of those women impacted by Katrina is highlighted – including, among others, narratives from women of colour and indigenous women, women of differing abilities, women of faith, women living with violence and those who work to provide help and support to them. Many of the authors are not academics but instead are some of those women impacted most, and are activists and service providers, and many of the academics who have contributed write as women caught up in the events, reflecting on them from their personal and professional viewpoints.

The book is organised by theme, and begins with a section that seeks to highlight
that there did not need to be a rewriting of Katrina to include gender, but that gender
issues were very much present from the outset. This section contains articles written in
the weeks after Katrina, while much of New Orleans remained under water, that seek
not only to highlight gender issues but also to highlight the root causes of the catastrophe, making links between the US involvement in external conflict and the unfolding internal disaster. The next section presents a series of testimonials documenting struggle and survival, with many of the authors drawing on letters and diaries from the time, records of the events as they unfolded.

This powerful writing from women generally cast as ‘victims’ of such events, allows an opportunity to highlight their agency and actions and demonstrate how victims are not just survivors but in many cases protectors and rescuers of others. It also allows a voice to those whose job is to remain and protect the sick and injured and their gendered experience of this caring role. Practitioners will have much to learn from the narratives of those who were ill and disabled when Katrina struck, in terms of their specific needs, which are seldom thought of or catered for, and how this affects their choices.

The third section seeks to link the risks and choices women face in their ‘normal’ lives with those raised by Katrina, to highlight that gendered vulnerability is an historical construct, revealed by events such as large-scale hurricanes, not formed by them. It documents the series of decisions such events throw up for women – from whether to evacuate or not, with whom to where, to the decision to return ‘home’. The range of circumstances of the women whose experiences are documented here serves to demonstrate the commonalities that lie behind the diversity of women’s lives and life choices.

Part four moves from a focus on individual women and their actions to documenting of collective responses of resistance. The chapters highlight the importance of social networks and makes visible the response of different ethnic, cultural, and religious groups caught up in Katrina with a lively chapter on Jewish women’s collective responses, for example, and a chapter documenting the work of Vietnamese American women seeking to challenge the environmental hazard posed to their community by the process of ‘reconstruction’ for others.
The final section offers two chapters that seek to draw out Katrina’s meaning for disaster theory and practice.

The book’s real contribution to the field is the variety of voices it allows to be heard and the spectrum of circumstances it documents, charting events from the decisions made as the hurricane advanced, through the storm itself and the immediate aftermath, to the continued struggle for survival both individual and collective. It is not a book that provides a conceptual or theoretical knowledge of disasters for those new to the field, and nor does it pretend to. Its academic strength lies in providing excellent case study material and some much-needed ‘evidence’ for those working in the field to use to promote women’s rights post-disaster. The diversity of writers over the 27 chapters means there is something for everyone, and all readers will be able to find something new and informative in its pages, and learn from it. While documenting destruction of life and livelihoods, and conveying exceptionally well the struggle for survival during the storm, it still manages to be a good read, with lively writing and insightful contributions. As Elaine Enarson, one of the editors, tellingly noted in her pioneering work in the emerging field of gender and disasters in the 1990s – disasters reveal existing unequal power relations at all levels, from the national to the intimate. So too does this book. As such, it is a recommended read for practitioners in gender and development as much as those working on ‘disasters’, as the events documented here can be read as extreme versions of the daily struggles many women face across the developed and the developing world. It is also a recommended read for those teaching in the field of disasters, development, and gender as students will be drawn in through the narratives and enthused to learn more about the root causes of inequality. Researchers too will find this a book they will return to again and again to provide evidence for arguments, and to dip into for quotes. Overall then, an excellent addition to any and all bookshelves – a highly
recommend read!

The Women of Katrina: How Gender, Race, and Class Matter in an American Disaster is published by Vanderbilt University Press